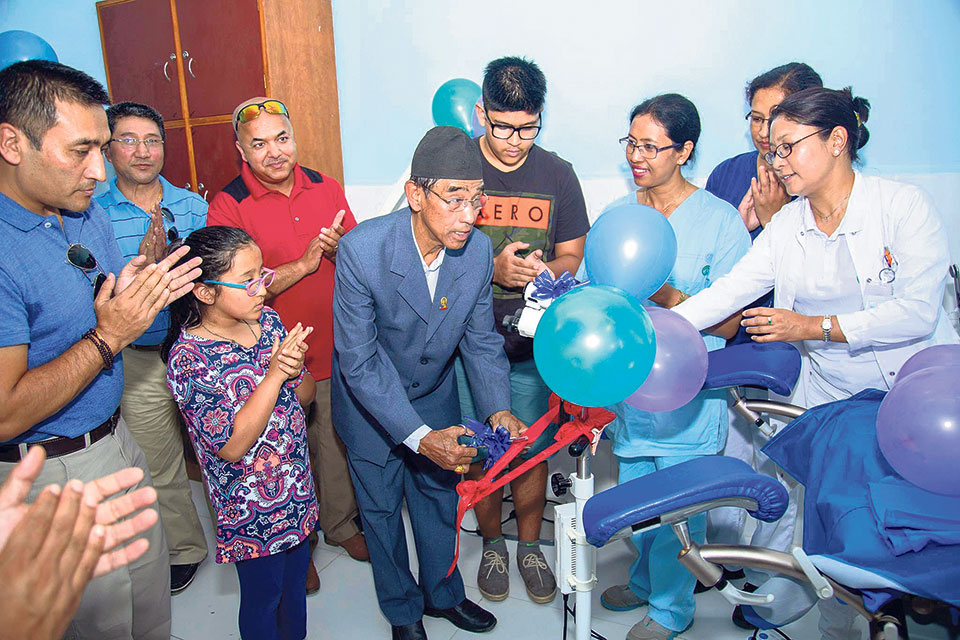 BANEPA, June 30:  After losing his wife Kamala Shakya to cervical cancer, Swayambhuraj Shakya of Dhulikhel-2 geared himself up for a campaign to make sure that no other woman dies the death of his wife.

Shakya currently lives in Texas, America with his family. Despite being associated with the nursing profession and living in a well-developed country, they were not able to trace the illness on time. So, it's obvious for him to support this campaign. Kamala had undergone every single treatment meant for cancer from the November of 2017 but in vain. She breathed her last on April 18, 2018.

"I did everything possible to encourage her to fight back cancer. I gave her examples of Manisha Koirala and many more. She too had agreed to return to Dhulikhel and          participate in awareness programs against cancer after her treatment," recalls Shakya. He says it would have been possible to save her if they had found out about her illness on time. "Though doctors had clearly told us that she is not going to survive for long, we still had a ray of hope," he added.

Shakya and his wife had fled to the US 22 years ago for their higher studies in nursing and Information Technology respectively. After completing studies, they had planned to gain some experience, return to their own country and continue working in their respective fields here. They had also planned to educate their children at Kathmandu University.

"However, all those dreams which we had seen together have been shattered now," said Shakya who was seen it Dhulikhel Hospital some days ago. Shakya was going through the pain of losing his wife, when Suraj Poudel, a real estate businessman who works in Texas, convinced him to do something to keep his wife's work alive. Despite being a nurse, Shakya's wife was widely involved in social work too. So, in respect of her work and contribution, Suraj along with some friends established the Kamala Shakya Foundation.

Since then, this foundation has been running a campaign to save women from cervical cancer. It provides free checkups for women to test their ovaries.  They have even raised a fund of USD 32,000 to save hundreds of women like Kamala. "We have coordinated with Dhulikhel Hospital for the campaign as it will be easier and cheaper for the women to treat cervical cancer if it can be diagnosed on time," said Suraj, who is also the founding chief of the foundation.

The foundation has provided two machines required for colposcopy and cameras to the Gynecology and Obstetrics Department of the hospital. Gynaecologist and Associate Professor Dr Sunila Shakya had received the equipment on behalf of the hospital in the presence of Dr Rajendra Koju, Dean of Kathmandu University, and School of Medical Sciences. "Cervical  cancer is the second most common problem among women after breast cancer," said Dr Shakya.

The major reason behind cervical cancer is Humanpapiloma Virus (HPV). In developed countries, various organizations started vaccination programs against HPV in 2006 but in Nepal only a few organizations are doing that. Most women don't have access to it as it is expensive. In order to avoid cervical cancer, girls aged from 9- 14 can have this vaccine.

Man held for selling women including wife to Indian brothel

CHARIKOT, August 28: A man has been arrested on charge of his involvement in the trafficking of his spouse and another... Read More...

SURKHET, June 14: A husband has murdered his wife in a drunken stupor by using a stick here at Koldanda... Read More...

Man who burned wife to death arrested after 17 yrs

KATHMANDU, June 26: Police have arrested a man on the charge of burning her wife to death seventeen years after... Read More...

69 including 15 lawmakers of federal parliament test positive for COVID-19, one succumbs to the virus
17 hours ago

Medical supplies including oxygen cylinders and ventilators ready to be delivered to Nepal: China
11 hours ago

Congress formally decides to vote against PM Oli
8 hours ago