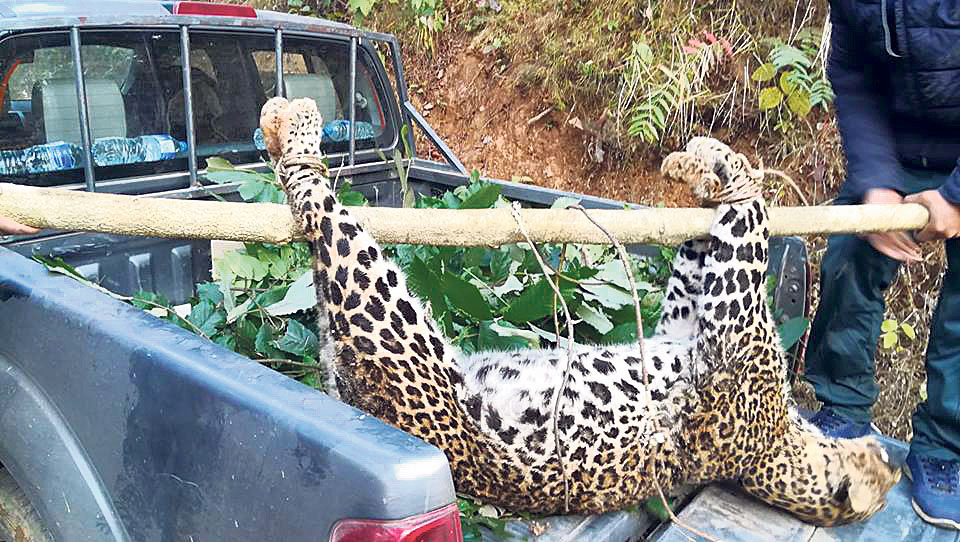 TANAHU, Jan 14: A leopard which had been wreaking havoc in Bhanu Municipality for the last few months has been found dead. Its dead body was recovered from a jungle at Bhanu Municipality-2 on Sunday morning. The Forest Division Office has confirmed that it is the same leopard which had attacked and killed children recently. "We confirmed it after tallying its shape, size and body marks. The leopard was captured on our camera," said Kedar Baral, chief of the office.

For the last few months, locals of wards 2, 3 and 4 of Bhanu Municipality had started patrolling during night due to the leopard menace. On Sunday, when they were going through the jungle, a few women smelled something on the way. When they tried to locate the spot, they saw the leopard's body lying on the ground. "The women had been to Deurali community forest to collect fodder. There they spotted the leopard's dead body," said Baral.

According to Baral, the reason behind the death is not clear yet. However, it could be due to poisoning, he added. "We suspect that it could be due to food poisoning but we cannot say anything with certainty without seeing the medical reports," he said.

Two children had succumbed to the injuries and many others were severely injured when the leopard attacked them two months ago. Stating that 'human life is precious than that of animals', they had demanded that the leopard be identified and killed.

This had alarmed the forest department resulting in several measures to trap the leopard. However, it was turning elusive.

According to Baral, now as the dead body has been recovered, its skin and other precious organs would be withdrawn before destroying the body.

BAITADI, Jan 12: It has been seven years since the people of Talloswarad of Baitadi district started walking in groups... Read More...