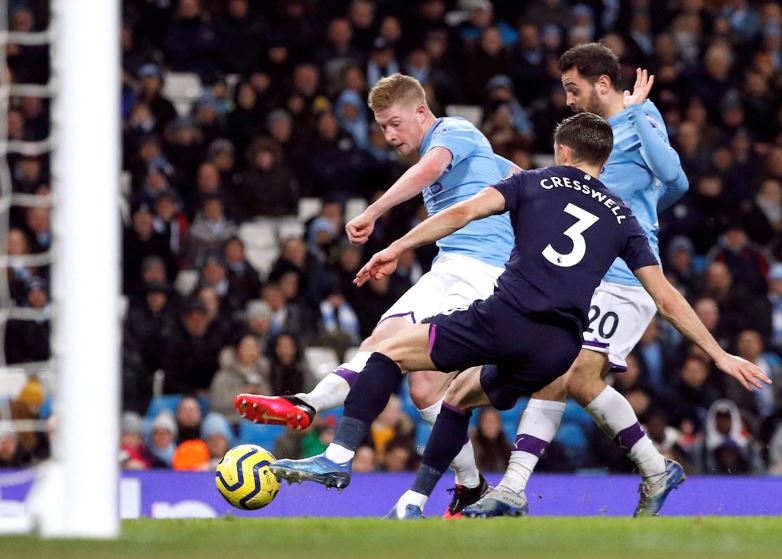 MANCHESTER, ENGLAND, Feb 20: Manchester City manager Pep Guardiola has urged his players to focus on their jobs but while they delivered on that in Wednesday’s 2-0 Premier League win over West Ham United, the team’s supporters vented their anger over the club’s two-year ban from European football.

Goals from Rodri and Kevin De Bruyne secured a comfortable win at the Etihad against an unadventurous West Ham side who are deep in relegation trouble.

City fans chanted their opposition to UEFA and sang “We will see you in court” while some held up banners, such as ‘UEFA Mafia’ and ‘UEFA Cartel’.

Those slogans reflect the widely-held view among the City fans that the Financial Fair Play (FFP) regulations that their club are accused of breaching are aimed at blocking challengers to Europe’s established elite.

Guardiola says he has told his players that while the club will handle the appeal against the UEFA ban, the players need to do their part on the field.

“We have a deal, we are professional on the pitch, what happened off the pitch we cannot say, we cannot do much,” Guardiola told reporters.

“We talked about what we were going to do until the end of the season what we have to do, especially for the people who love this club, there are many, and that is going to happen. So play our games as best as possible,” he said.

City took the lead on the half hour from a well-worked corner routine, Rodri rising to meet Kevin De Bruyne delivery with a superbly angled header at the near post.

De Bruyne doubled the lead in the 62nd minute, squeezing in a right-foot shot at Lukasz Fabianski’s near post after a swift exchange with Bernardo Silva.

“The way we played shows we are there. We score two goals we conceded little,” Guardiola said.

“We create clear chances and I am satisfied how aggressive we were the transitions and how we defend in the box. The team is incredible,” the Spaniard added.

City are second in the league table but are 22 points behind leaders Liverpool while West Ham remained in 18th position and mired in the relegation battle.

The game was originally scheduled for Feb. 9 but was postponed due to stormy weather.

Premier League has made me stronger, says Guardiola