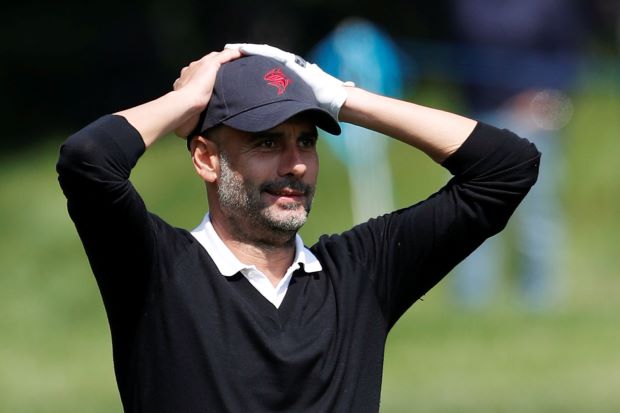 Manchester City manager Pep Guardiola was banned for two matches by UEFA on Monday after being found guilty of communicating with his staff despite being sent to the stands in his team’s Champions League quarter-final second-leg defeat by Liverpool.

Guardiola’s suspension for one of the matches has been deferred for a probationary period of one season, UEFA’s Control, Ethics and Disciplinary Body said in a statement.

The Spaniard was dismissed for protesting against a disallowed goal in City’s 2-1 defeat, but was found guilty of continuing to communicate with his technical staff.

Champions League runners-up Liverpool were fined 29,000 euros (£25,472) for violations in three matches in the competition, including “acts of damage” by fans who attacked City’s bus during the first leg of the quarter-final at Anfield.

UEFA fined Liverpool 20,000 euros for violations by fans in the first-leg tie, including setting off fireworks, throwing objects and crowd disturbances.

UEFA has also ordered Zenit St Petersburg to play their next European home game behind closed doors after the Russian club were found to have committed a number of violations, including racist behaviour by their supporters.

US investment in Nepal is not the product of any geopolitical dynamics: USAID Chief
11 hours ago

Availability of animal carcasses attracting vultures to Tanahun
1 hour ago

Constitution and political system will not be reviewed: PM Dahal
2 hours ago

It is necessary to streamline sports sector: Speaker Ghimire
2 hours ago
Man killed with the intention of robbery in Gaushala, one arrested
3 hours ago