Man and woman tortured at ward office for ‘illicit relationship’ 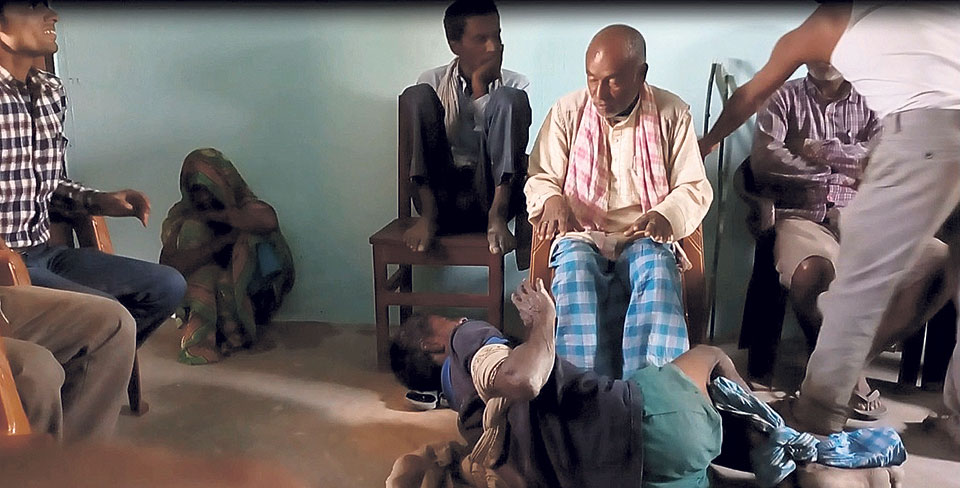 This picture taken from a leaked video shows a man being beaten at ward office of Sonma Rural Municipality-7 for allegedly having illicit relation with his sister-in-law.

MAHOTTARI, March 28: A video showing a man in his early fifties being brutally beaten in front of some people went viral in Mahottari on Monday. The video shows the man lying on the floor with his legs tied with his own lungi (loincloth) while another man is seen hitting him mercilessly with a stick inside a room.

Some people are seen sitting on chairs and watching the incident but no one seemed to be bothered by the painful scream of the man. After a while, some people present in the same room say 'it's enough' and then the person is spared.

This 24-second video was recorded ten days ago in Sonma Rural Municipality ward no 7, Sundarpur where a man and a woman were punished for having illicit sexual relationship. However, the video was leaked ten days later and has created a stir in the whole district.

The person shown in the video has been accused of having illicit relationship with a woman of his locality who happens to be his sister-in-law.  After being exposed of the misdeeds, the ward office called both of them and tortured them. This incident came to light only when the video of ward chief of Sundarpur, Mahesh Yadav, punishing the two was released on social media.

According to the witnesses, ward chief Yadav punished Isarafil Baitha Dhobi, 55, and his sister-in-law Sairun Khatun, 45, of the same village by beating them inside a locked room. Reportedly, ward chief Yadav beat Khatun himself but he requested another local Amrit Ray to beat Dhobi.

Meanwhile, the victims claimed to be innocent. They have stated that they are ready to bear any kind of punishment from the society if their illicit relationship is proved. They have also demanded for stern action against those involved in torturing them. Khatun's father-in-law Ailun and brother-in-law Jilani had called for a meeting of senior members of the village along with ward chief accusing her of having illicit relationship with Dhobi.

After a brief discussion between some villagers and officials of the ward, both of them were called in the ward office and punished. After the incident, the victims immediately reached the police station in Magarthana and then to ward police office. But police couldn't help them as their torturers denied the allegation. Manoj Paswan, in-charge of Magarthana Police Station told Republica that he has no idea about the incident.

According to Raj Kumar Yadav, chairperson of Sonma Rural Municipality, Khatun and Dhobi may have been punished because they had illicit relationship since a long time and they were told by the villagers to stop their activities but they continued with it. He stated that he knew about the punishment only when the video was leaked on Monday. Chairperson Yadav also informed that Dhobi maintained illicit relationship with Khatun taking advantage of the fact that her husband is mute.

Few days ago, Dhobi had allegedly entered Khatun's house for sexual intercourse at around 12 am but he was caught by her father-in-law and brother-in law, according to Chairperson Yadav.

UDAYPUR, Feb 11: A guy has been arrested on the charge of swindling and then trying to sell a woman to... Read More...

KATHMANDU, Dec 7: Police on Tuesday arrested a man for his alleged involvement in murdering his female partner with whom he... Read More...