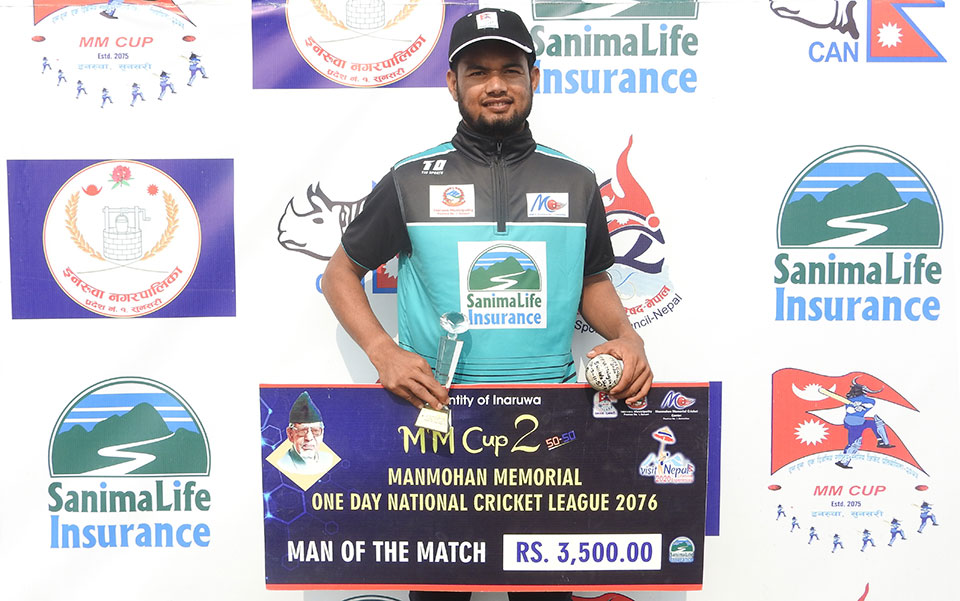 In the first Group D match played at Inaruwa Cricket Ground, the Malaysian team was bowled out for 49 runs in 22 overs as Sudur Paschim chased down the target in 7.2 overs to secure the emphatic win. This was the second biggest chase of the MM Cup with 238 balls to spare.

Malaysia XI, making their debut in Nepal’s domestic cricket, won the toss and elected to bat first. However, the batsmen struggled to negotiate all-spin opening bowling attack from the local team. Captain Santosh Bhatta introduced left-arm spinner Binod Lama from one end and off-spinner Sher Malla from the other. Lama registered a four-wicket-haul whereas Malla went on to take five wickets to dismiss the Malaysian team under 50 runs. Left-arm pacer Bikram Thagunna picked the last solitary wicket.

Malla registered the remarkable bowling figures of 10 overs, three maidens and conceded 11 runs to be adjudged as player-of-the-match. Lama conceded 21 runs from his nine overs.

Malaysia’s Virandeep Singh was top-scorer for the side with 22 runs which included three boundaries. He stayed at the crease for 69 deliveries before being out-foxed by Thagunna as Lokesh Bam completed the catch. Singh failed to get any support from the other end.

Dhivendran Mogan and Anwar Rahman shared a consolation wicket each for the Malaysian team.

Community forest in Godawari Municipality being encroached upon

KATHMANDU, Sept 21: The government has formed a committee led by an SSP to investigate into the murder of Khursid... Read More...