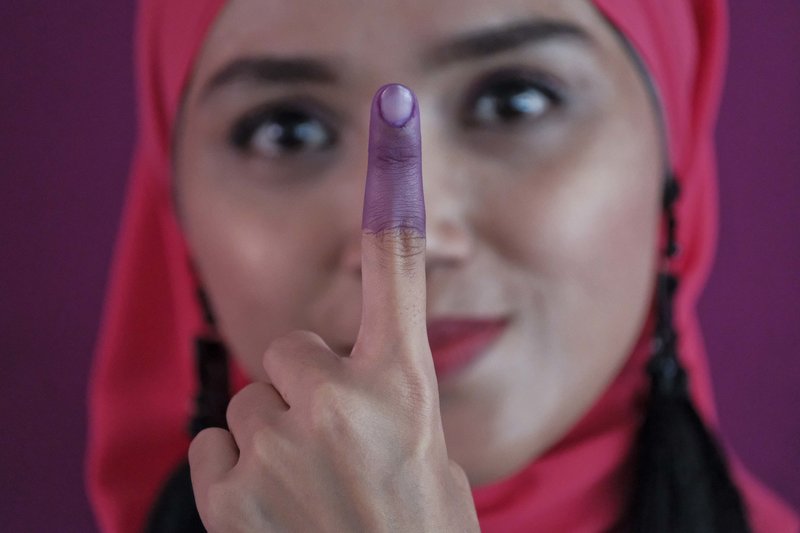 A Malaysian Muslim woman shows her inked finger after casting her ballot during the voting day of general elections in Kuala Lumpur, Malaysia, Wednesday, May 9, 2018. Voting has begun in a fiercely contested Malaysian election that pits a reunited opposition led by former authoritarian leader Mahathir Mohamad against the ruling coalition of Prime Minister Najib Razak whose image has been sullied by corruption allegations and an unpopular goods and services tax. (AP Photo/Sadiq Asyraf)

KUALA LUMPUR, May 9: Malaysians flocked to vote in a fiercely contested election Wednesday that pits an opposition led by former authoritarian leader Mahathir Mohamad against the ruling coalition of Prime Minister Najib Razak, whose reputation has been battered by corruption allegations and an unpopular sales tax.

Long lines formed at polling booths in Kuala Lumpur and other cities before they opened at 8 a.m. By midday, 47 percent of eligible voters had cast their ballots, state news agency Bernama reported. Voters at a polling station at a school in central Kuala Lumpur dipped a finger in purple ink before casting their ballots, as election officials looked on.

Analysts say the ruling National Front, in power since independence from Britain in 1957, might lose the popular vote for a second consecutive election. But it could still win a majority in Parliament due to an electoral system that gives more power to rural Malays, the party’s traditional supporters.

Faced with a reinvigorated opposition under the 92-year-old Mahathir, the government has used the levers of power to further tilt the playing field in its favor, critics and analysts say. Redrawn electoral boundaries were rushed through Parliament last month, pushing likely opposition voters into seats that already support the opposition and dividing constituencies along racial lines. A recently passed “fake news” law was an attempt to stifle debate and criticism, opponents said.

“If Najib wins a very narrow victory with a minority of public support but an electoral majority because the system has been rigged, I think that will create some discontent in Malaysia, which could cause long-term problems,” said Amy Searight, a Southeast Asia expert at the Center for Strategic and International Studies in Washington D.C. “It would be a further sign of the region’s democratic decline.”

Mahathir, prime minister for 22 years until 2003, emerged from political retirement and joined the opposition in attempt to oust Najib, his former protege, after a multibillion-dollar corruption scandal at state investment fund 1MDB set up by Najib.

The U.S. Justice Department says $4.5 billion was looted from 1MBD by associates of Najib between 2009 and 2014, including $700 million that landed in Najib’s bank account. He denies any wrongdoing. An unpopular goods and services tax, introduced by Najib in 2015 to boost government revenue as Malaysia’s oil wealth dwindles, has also dented support for the ruling coalition. It hit poor rural Malays particularly hard.

“Enough is enough. We want a clean and just government. We want a party for all races,” said Agnes Yap, a bank employee, after she voted in a Kuala Lumpur suburb.

Reflecting Malaysia’s racial divides, Yap said the Chinese party in the ruling coalition had been subservient to Najib’s Malay party and failed to defend the rights of the country’s ethnic Chinese minority.

The National Front lost its two-thirds majority in Parliament in 2008 polls and lost the popular vote in 2013, though it still won 60 percent of seats that year. Tindak, a group advocating for reform of the electoral system, says one third of voters decide half of seats.

Najib, the son of Malaysia’s second prime minister, cast his vote in the coastal city of Pekan.

The election campaign had been “quite vicious in the content of the personal attacks, which doesn’t reflect a mature democracy,” he said after voting. “But the most important thing is for the people to decide on the destiny of this nation and it must be based on facts, it must be based on policy.”

In an election eve appeal to voters, Najib promised income tax exemptions for young people and public holidays if his coalition wins.

Mahathir repeated the themes of a campaign that asserted a vote for the opposition would save Malaysia from a corrupt elite. After casting his vote in Kedah state, Mahathir declared himself to be “quite confident.”

“People are for people,” he said.

About 15 million Malaysians are eligible to vote and the Election Commission has predicted a turnout of 85 percent. Voting closes at 5 p.m. and results are expected in the late evening.

The opposition and election monitoring groups said the commission’s decision to hold the vote midweek was likely to lower turnout — many voters need to return to their hometowns to vote — and favor the ruling party.

“This time I see more young people stepping up to serve the country in whichever side they believe in,” said Zalina Halim, a project manager for Microsoft. “I guess no matter who wins, this can only be good for Malaysia and for that I am happy,” she said.

Asparagus price reaches Rs 5,000 per kg in local market due to surging demand amid low supply
34 minutes ago