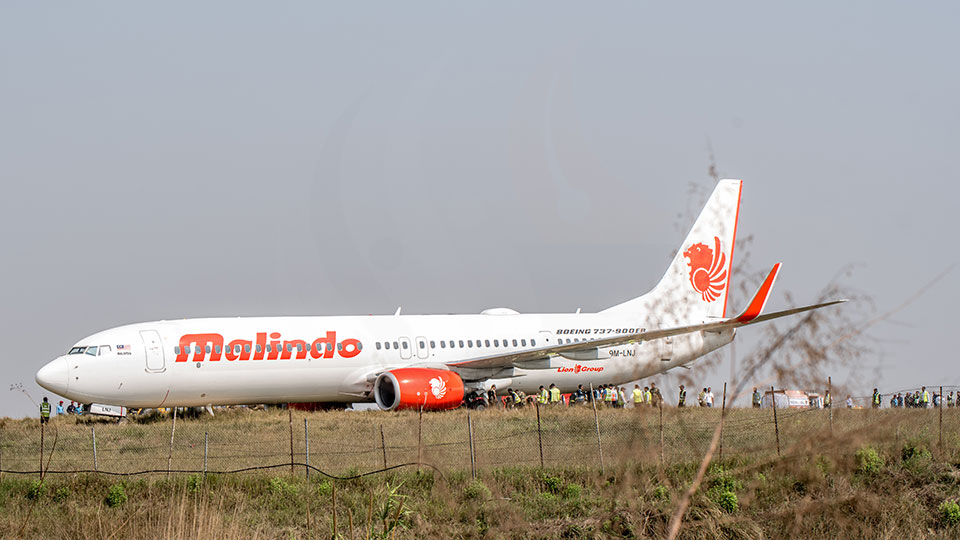 KATHMANDU, April 21: A Boeing 737 of Malaysia's Malindo Air with 139 passengers and crew on board skidded beyond the runaway at Tribhuvan International Airport at 10:15 pm Thursday.

The pilot aborted the take-off at the final moment when he saw an error in the monitor display in the cockpit, according to Raj Kumar Chhetri, general manager of the airport, who was quoting the pilot.

The pilot could not control the  Kuala Lumpur-bound aircraft as it was already on take-off mode. So the take-off was aborted and it came to a halt on grassland around 40 meters from the southern end of the runway.

Following the incident, all flights to and from TIA were halted for 13 hours. Flight operations resumed at 11:45 am on Friday after the Malaysian plane was removed from where it had grounded.

According to TIA, four incoming flights were diverted to Calcutta, New Delhi and Dhaka while six departures were canceled. Scheduled departures for Friday morning were delayed.

"A salvage team of around 60 members tried to tow the strickern aircraft from the grassland," Chhetri said. Ground handling personnel of Nepal Airlines Corporation (NAC), the Nepal Army and TIA firefighters were in the salvage team.
Lack of proper equipment and manpower delayed the towing, Chhetri added. TIA used equipment from the army for the purpose.

Kul Bahadur Limbu, a retired pilot, said lack of preparedness is a problem for airport operations. "Every time an incident occurs all the stakeholders make a commitment to improve matters but later on the commitment is forgotten," he said.

He further said that the bodies concerned should take the initiation to establish a well-equipped task force for such contingencies.  "The authorities should not hesitate to invest money in proper equipments," he added.

Limbu further said that this kind of problem arises because the country's sole international airport has only one runway. "Other countries tackle such contingencies within five to six hours but Nepal lacks the equipment and manpower," he added.

Three years back, it took TIA  three days to tow a Turkish Airlines plane that had also skidded off the runway.

Captain Maheshwari Dangol of Yeti Airlines said access to equipment matters most during such incidents.