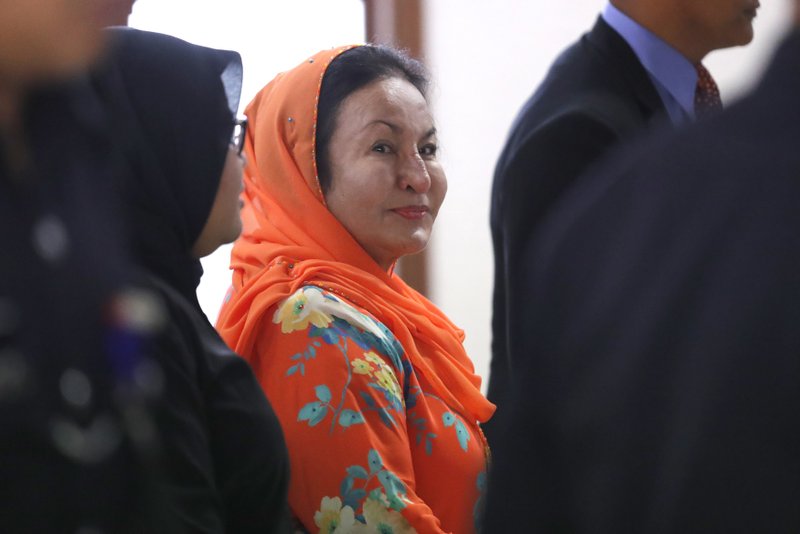 Rosmah Mansor, 66, was arrested by the anti-graft agency at its office Wednesday after it questioned her for a third time over alleged theft and money laundering at the fund.

Rosmah smiled and waved at reporters as she was escorted into the court building. The anti-graft agency has said she will face several for charges under the anti-money laundering act, five months after Najib’s shocking electoral loss.

“Clearly this is a first for Malaysia. This speaks to the prominent political role of Rosmah in the administration, which was highly contentious during Najib’s tenure. She was seen to be involved in the perceived corruption and his business dealings, as an important gate keeper,” said Bridget Welsh, political science professor at John Cabot University in Rome.

Najib also turned up at the court building Thursday for the management of his own corruption trial over the 1MDB scandal. He has pleaded not guilty to multiple counts of money laundering, corruption, abuse of power and criminal breach of trust and is to face trial next year.

Najib, 65, didn’t speak to reporters but in a tweet late Wednesday after his wife’s arrest, he said he will not cease praying and will put his trust in Allah.

Rosmah, 66, is widely reviled for her opulent lifestyle and penchant for expensive jewelry and designer Birkin bags that led to her being compared with former Philippine first lady Imelda Marcos and her extravagant collection of shoes.

Police found hundreds of luxury handbags, jewelry and cash — worth more than $266 million — during raids on apartments linked to the family shortly after Najib’s shocking electoral defeat in May. Seized were 567 handbags, 423 watches and 12,000 pieces of jewelry, including 1,400 necklaces, 2,200 rings, 2,800 pairs of earrings and 14 tiaras. Najib has said the items were mostly gifts to his family.

“More than anyone, Rosmah represented the greed and excess seen of the Najib administration, from rings to hairdos. The couple acted as if they were above the law and now they are being held to account. The arrest speaks to deep resentments and concerns about the abuse of power within Malaysia and shows that the new government is serious about greater accountability,” Welsh said.

In a biography in 2013, Rosmah said it was common for a prime minister’s wife to receive expensive jewelry and gifts. She also said she had earned millions of ringgit from her own music album, which wasn’t released to the public but was bought by government ministers who were fans of her singing talent.

Her daughter Nooryana Najwa Najib, echoing Najib’s claim that the government was seeking political vengeance against him, has slammed the government for going after the family.

“I can accept taking action on a man who was in power, but putting the women in his life in harm’s way is going too far,” she wrote on Instagram late Wednesday, citing a recent police raid on the house of Najib’s mother as well as Rosmah’s arrest.

Nooryana posted a picture of a young Rosmah holding herself as a toddler, and vowed “we will persevere.”

Najib set up the 1MDB fund when he took power in 2009, but it accumulated billions in debts and is being investigated in the U.S. and several other countries. U.S. investigators say Najib’s associates stole and laundered $4.5 billion from the fund from 2009 to 2014, some of which landed in Najib’s bank account. They say $27.3 million was used to buy a rare diamond necklace for Rosmah.

Public anger over the scandal eventually led to the ouster of Najib’s long-ruling coalition in May 9 elections that ushered in the first change of power since Malaysia’s independence from Britain in 1957.

New Prime Minister Mahathir Mohamad reopened investigations into 1MDB that were suppressed under Najib’s rule and banned the couple from leaving the country.