In recent times, the Nepali music scene has seen a rise in indie, lo-fi songs/music created by urban youths. These songs are often independently produced and tend to be more personal than those dominating the mainstream. One such artist, trying to make a name in this small but well-loved music scene, is Oasis Thapa.

Though it was one particular person in his life who inspired him to write all the six songs on his YouTube channel, now these songs are enjoyed by thousands of Nepalis viewers. His most recent release “Aparichit Bhawana” has been well-received by listeners. The song has a simple yet captivating acoustic riff which is complemented by Thapa’s raw and powerful vocals.

Here, Thapa talks to The Week’s Urza Acharya about his passion for music as well as his experiences as a budding artist.

Could you tell us a little about how music became such an important part of your life?
I think my avid interest in all things music started around seven years ago. At that time, I had no idea I’d end up making my own music. I listened to songs just for entertainment. I also learnt to play the guitar and that took a while. The first song I learned on my guitar was “Whistle” by Florida. Eventually I was able to separate the music that I liked and I drifted towards EDM, rock, slow jazz, and classical music. And those are my music preferences till date.

I wrote my first lyrics ever when I was 14 and I remember it being terrible—it didn’t rhyme at all and the bars were all off. But that was the time when I started to create something on my own. And ever since then, music, for me, has been a global language, one that can resonate with our emotions even if the words don’t make sense. It really is quite incredible.

Most of the songs on your channel have that acoustic feel to them. Any particular reason why you gravitate towards this genre?
Honestly speaking, it’s more of a compromise than a choice. As I’m not affiliated with any record labels and make my music entirely on my own, it’s difficult to hire equipment and arrange recordings for a song. But acoustic songs usually feature one single voice and a guitar with easy arrangements and so it’s easy for me to do. Plus, they always sound great.

If I had the chance to make a song without any restrictions (in both money and time), I’d probably opt for something under the rock, RnB or jazz genre. There’s this song called “Aoi Shiori” from an anime named Ano Hana and I would love to do something similar to that song. It’s just so wonderfully simple but unique at the same time. And that’s how I want my songs to be.

As you said you make music independently, how do you feel about joining a record label to make music more commercially?
Joining a record label would be great! My reach would increase greatly, I’d be able to interact with other musicians and better the quality of my productions. However, the only thing I’m slightly afraid of is whether or not will I be able to exercise complete freedom in how my songs are made and produced once I join a record label. I don’t want to be creatively stifled and conform to a label’s demands to make music that’s more mainstream just to become popular.

Sure, when I started out, it was all about fame. But now I know how difficult all of it actually is. So I want to make music for myself and for people who genuinely like and appreciate it. But this doesn’t mean I’m not up for the idea of joining a record label as I would love to experiment and test my boundaries.

All the songs on your channel are either love or break up songs. How do you stay original in a genre that’s already so saturated?
I absolutely agree that there are a lot of love or break songs out there. And with so many things already done over and over again by so many artists, it becomes difficult to come up with something totally new. While writing lyrics in Nepali, words like “pirati”, “maya”, “mutu” are so common that I felt like I was ripping them off from an older song. So, I try to mix them up a bit and come up with a new sentence or an entirely different flow of words to make it sound a bit different. I also think the emotions with which you write the lyrics always lend it a certain uniqueness.

Moreover, it’s not that I’ve only just written love/break up songs. I’ve shelved songs where I talk about the bigger ideas of life. I think I need to work on them a little more and I will release them once I’m confident about them.

Your most recent release is called “Aparichit Bhawana”. What was the creative process behind the release?
Lyrically, I thought about those moments when you like someone but haven’t told them and you’re trying to express your feelings in subtle ways. That’s what it means by “Aparichit Bhawana” which in English translates to “unacquainted feelings”. I roughly jotted down a few words and then I worked on it further.

For the melody, it just came to while I was playing around with my guitar. The plucking seemed to go well with the melody and I thought to myself that this could be a good song. And that’s pretty much how this song came to be. 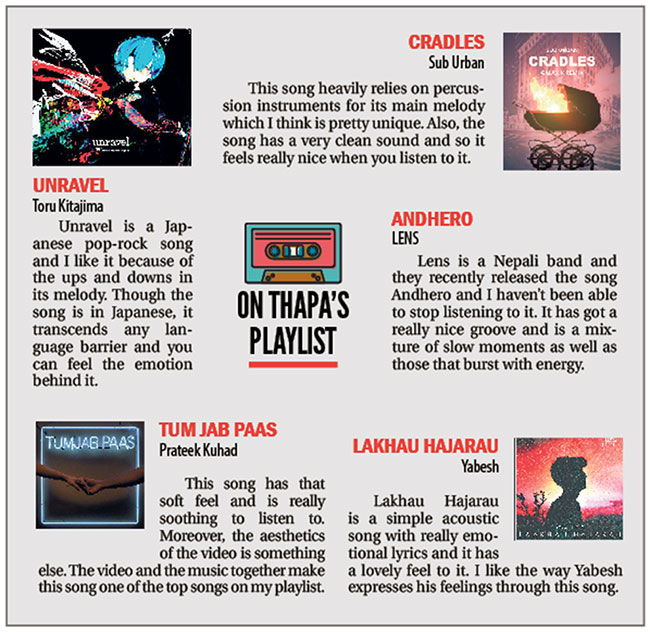 After a gap of five years, Trisha Gurung made a return to music with her first solo album. She began... Read More...

In a tête-à-tête with Republica’s Arun Budhathoki, Aayush Shrestha, the co-founder of Lishn, talks about the future of streaming app,... Read More...