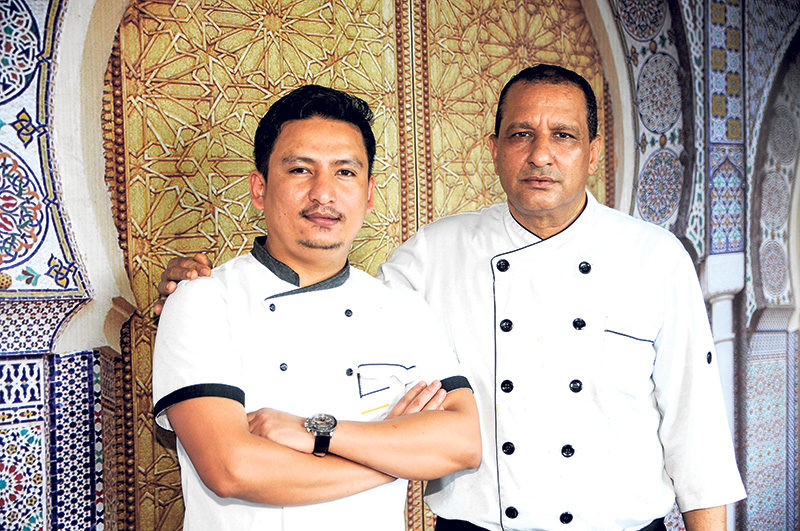 Hummus, Taboluleh, Moutabel, Baba ganoush, Taffoush, Falafel and on goes the menu but this is just one dish, that too categorized under platters on Privé’s menu and served as light bites. The restaurant at Labim Mall in Pulchowk has certainly earned a name for serving the finer experience of Middle Eastern centered cuisine. The mentioned Mixed Lebanese vegetarian platter just happens to be one of the crowd favorites.

But despite this exotic rep of the available dishes, Chef Rawal insists that cooking Middle Eastern food is relatively simple that is once you understand its flavors. Privé also has an Egyptian chef helping them run their kitchen and they inform, to cook this cuisine, there are certain ingredients you want make sure are available on your kitchen shelf.

But despite these numerous items, Rawal explains, “Each and every food item in Middle Eastern cuisine has only one starring spice. So for example if we are cooking cinnamon rice, cinnamon heavily dominates the flavor. That’s the difference between this and Indian food. “

Another distinct thing about Middle Eastern food is the space it allows the cook to play with the recipes. Since the Middle East is a group of countries that range from North Africa through Asia, you will notice that the same dishes may taste entirely different based on the region.

Chef Rawal also has had fun creating his own dishes. The Arabic stuffed pizza served as Starters is an example. “We already have many good pizza joints around town, but this is cooked the Arabian way, starting with the dough itself,” says Rawal.

This dish comes in both vegetarian and non-vegetarian option but Rawal seems to particularly relish the mutton kebab one. The minced meat is apparently flavored with spices, capsicum, cheese and fried onions, placed on top of fermented dough and then folded. Since the fillings are mostly cooked, it only takes a couple of minutes to get done and rise. The top is like a thin crust, crispy and brown, whereas the bottom is softer and thicker. To finish it off, they garnish it with sour cream, parsley and offer some garlic sauce. It’s a pizza but with a completely different kick.
Rawal considers this as an apt example of how you can manipulate Middle Eastern flavors into your day-to-day cooking as well. This cuisine offers many quick and easy recipes and they cater to everybody. It really doesn’t matter whether you are craving some meat or veggies.

Falafel and hummus are among the dishes that the chef considers suitable for home cooks looking to try their hand at Middle Eastern food. Hummus is probably the best-known Middle Eastern food. Basically, hummus is a mashed chickpea dip made with tahini, olive oil, garlic and some lemon juice. It’s such a tasty and healthy option that many cooks choose to incorporate it in many different ways. It can be served with pita bread, vegetables, chicken, or even as a sandwich spread.
If you quiz somebody about famous Middle Eastern food and their answer is not hummus, chances are they are going to go with falafel. Privé serves these deep fried round patties made from ground chickpeas, onions, and spices with Arabic sauce. It’s often eaten as breakfast but can be served as appetizers as well.

If the carnivore in you is feeling slightly neglected then fear not, the options on the main course, shall not disappoint. Rawal personally recommends, Ozzy Mansaff. Here you will find a leg of roasted mutton that is served with some delicious gravy with biryani.

Often in Middle Eastern cuisine when meat is eaten, it is usually chicken, beef (though of course, not here in Nepal), and lamb often skewered and grilled as kebabs. Rawal explains that you will be hard pressed to find thick gravy. “We use a lot of vegetables even in the meat. You will find potatoes, carrot, zucchini, capsicum, aborigine almost everywhere and they mostly aid to bring flavors to dry meat,” he says.

Yogurt and cheeses also make up the rest of the protein content of the diet. Regardless of the style of cooking, Rawal notes that the goal is always to bring out the real taste of the meat. “The juices on meat dishes are often from the bone marrows. They like that. It’s important to wring out the meaty flavors,” he says.

So don’t let the foreign names intimidate you. There is obviously something for everybody and though the featured spices and condiments are the same old, the cooking experience is set to be distinctly new.

Why is democracy failing to deliver?
18 hours ago

NC will put UML in its place: Gagan Thapa
7 hours ago