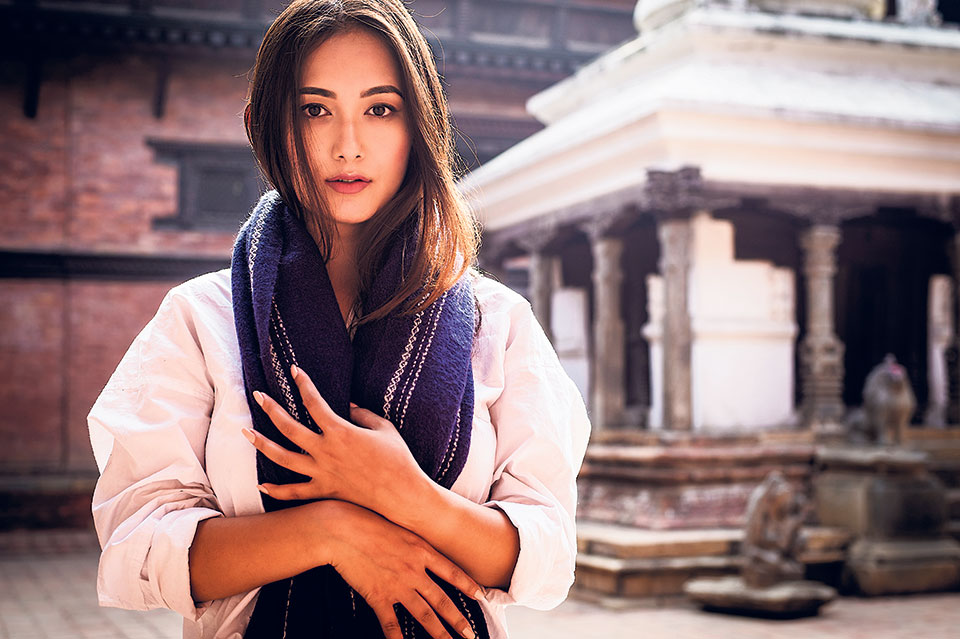 With those alluring eyes, warm smile, and radiant looks, Shilpa Maskey is all set to make her presence felt in the Nepali film industry. Here portfolio has lots of amazing projects ranging from stage performances, music videos, short movies, to a huge break in the Hollywood movie ‘Doctor Strange’. She has also been featured in many magazines and commercials not just in Nepal but in the United Kingdom as well. Here leap into stardom has many wanting to know more about her.

Keeping that in mind, The Week’s Ashma Chhetri sat down for a chat with the talented rising star.

How did you get into the field of acting?

It was in 2014 when I went to audition for the short movie ‘Shooting for Elephant’. The basic requirement for the role was that the actor should be able to dance. Out of all the participants, I was selected because I could dance, and dance well. That was the first time I stood in front of the camera for such a big project and the experience was incredible.

The movie set felt like home and the crew, a part of my family. But my biggest break has to be Doctor Strange in 2016. It was no less than a dream for me to be able to work for that project and be a part of a team that had Hollywood celebrities. After that, I also got a chance to act in the Nepali movie Kagajpatra. And there has been no looking back ever since then.

What made you take up dancing in the first place?

I started with dancing to Nepali numbers. I simply loved the beats and rhythm of Nepali songs. But I have always been a huge fan of the Indian actress Madhuri Dixit so I also enjoyed dancing to Bollywood hits as well. It was this interest in dancing that made me want to get trained in the first place. Now, I’m a trained Bharatnatyam and Kathak dancer. Recently, I’m practicing contemporary dance but it’s too soon to say that I have mastered the dance form.

How was your experience of working in a Hollywood project?

Hollywood, as far as I can say, is all about professionalism and punctuality. While working for Doctor Strange, I was surprised to see that every single detail about the shoot would be planned to perfection and everyone worked according to the schedule. I also feel Hollywood is a place where you are respected as an actor no matter the scale of your roles. I think this is where our Nepali film industry falls behind and it’s challenging for actors here to be able to assert their importance or talent. I don’t think you are given your due as an actor unless you are a ‘big star’.

Besides getting to act in a Hollywood movie, what’s another achievement that you are really proud of?

It would definitely have to be getting to perform in front of thousands of people in the O2 arena in London in 2015. We were a team of 20 and had been rehearsing the performance for six months prior to the grand show. Our hard work paid off and our performance was a hit and was highly appreciated by the audiences. I remember going backstage after the dance and crying with the team. It was certainly a proud moment yet we got really emotional about the fact that it had come to an end.

Keeping your professional life aside, how would you describe yourself?

I’m just a regular girl who loves watching movies, reading, and traveling, in that order. I would say I’m an introvert because I would rather spend time alone than go out unnecessarily, unless it’s with my close group of friends with whom I love spending time. Also, I think of myself as an honest person who likes to do everything with integrity. But I also have the tendency to take things too seriously sometimes. Having said that, I’m often told I’m funny. I don’t know how true that is but people say so, and I’m inclined to believe it.

Honestly, I don’t have any special rituals or secrets. I can’t give up on food or maintain my diet. So I make it a point to never miss my workout sessions. Previously, I had many skin problems so now I’m very particular about my skin. I would say it is the only thing that I’m actually conscious about. I make sure to drink plenty of water or other healthy beverages to keep skin problems at bay.

Could you tell us about your future plans?

I prefer going with the flow rather than planning every detail of my life. Currently, I’m engaged in different projects. I wish to do a women-centric character, a role that isn’t secondary to a male counterpart. And I want to be able to create an impact through a strong portrayal of that role. Also since I have not done theater yet, I want to be a part of a theater production as well and perform in front of a live audience. But these are just wishes and dreams. Let’s see what the future has in store for me.

Making it big on the EDM scene

20-year-old Arpana Tamang who has been a DJ for just four years now is perhaps one of the biggest names... Read More...