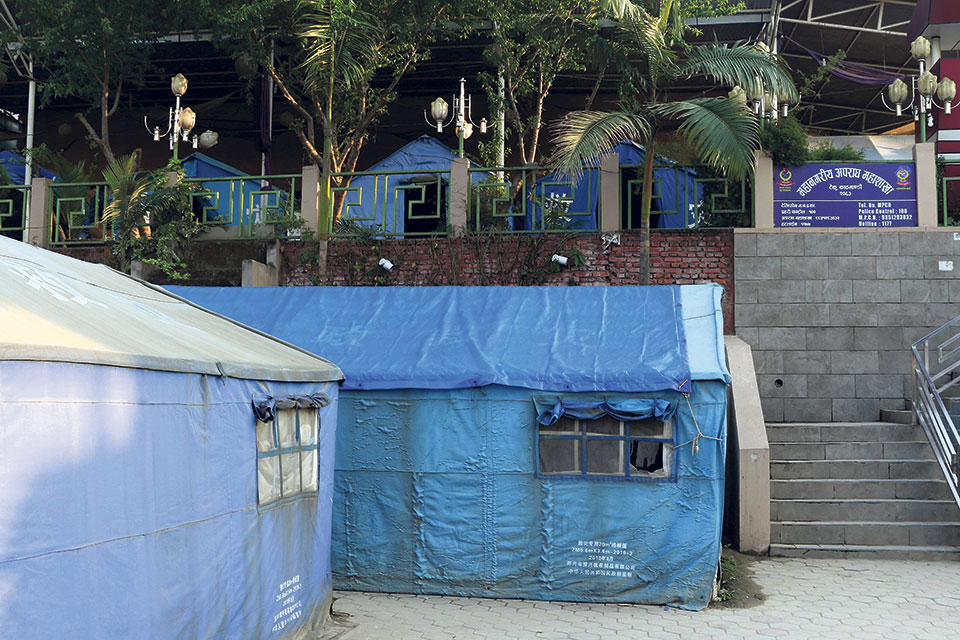 KATHMANDU, May 2: Even after four years of the 2015 earthquakes, two major police offices in the capital that were damaged by the quakes are still operating under tents, awaiting the start of the reconstruction of the office buildings.

Police have said that there are about 260 officers working on a daily basis at the MPRO while 250 officers work at the MPCD and all of them have been left with no option but to work under a few tents that are available as office space. “As a result of the crunch in office space, several high-ranking police officials have been forced to share ‘office rooms’ with each other,” chief of the MPRO, Senior Superintendent of Police (SSP) Basanta Lama told Republica.

Police officials claimed that the space crunch has also had an adverse effect on the service delivery by the police offices. “On the one hand, the secrecy of the service seekers has been undermined as several service seekers have to file their complaints in the same room,” Superintendent of Police (SP) Kedar Dhakal lamented, “On the other hand, police personnel are exposed to health problems due to the poor living conditions at the tented offices.”

According to officials at the Nepal Police headquarters, police had made a plan for the reconstruction and even demanded budget within months of the earthquakes. However, the government has not provided the funds for a fourth consecutive year.

Similarly, the government has decided to acquire 15 ropanis of land near the Nepal Food Corporation Office at Prithvipath for the construction of office of the MPRO building. SSP Lama claimed that the land has not been acquired since the secretary at the Ministry of Industry is on leave.

“The MPRO has not been able to acquire the piece of land since the industry secretary is required to be present during the handing over of the land belonging to the Nepal Food Corporation,” he said, adding, “Once he returns, the land acquisition will take shape.”

RASUWA, Dec 13: Rasuwa was one of the worst-affected districts by the devastating earthquakes of 2015 in terms of both... Read More...

KATHMANDU, Oct 31: More than three years since the monster quake of 2015 shook the entire nation to its core, three... Read More...