Mailung-Syafrubesi road to come into operation in April 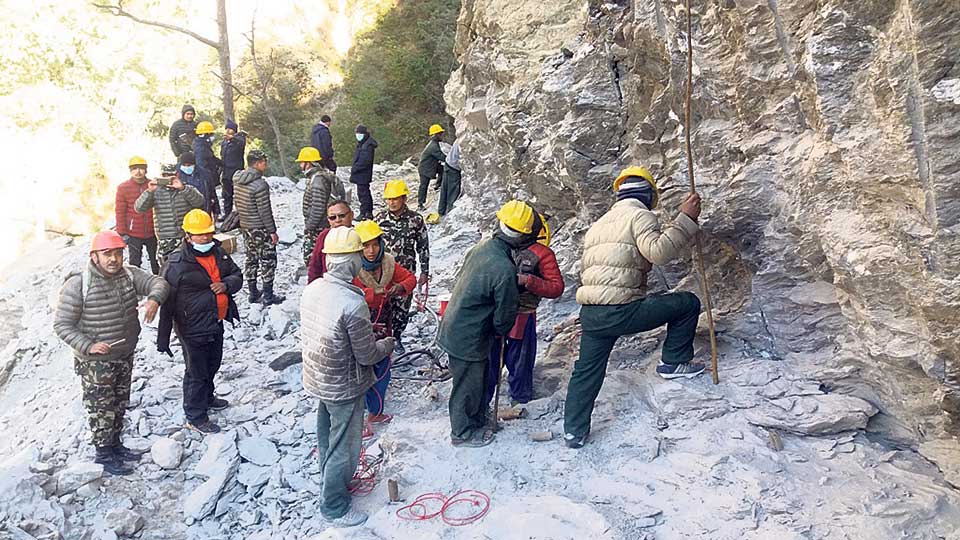 Workers prepare to insert explosives to clear rocks during the construction of the Mailung-Syafrubesi road.

RASUWA, Jan 27: The Galchi-Betrawati-Mailung-Syafrubesi road, a project of national pride, is set to be completed and brought into operation from mid-April. Nepal Army, who undertook the construction for sections of the road, has said that the construction work for the shortest road connecting Kathmandu to China is in its last phase. The opening of track for the road has been completed, according to officials. The road construction had started in mid-April 2015.

“Expansion of the road into two lanes is in its last phase,” said Sanjaya KC, chief of the road construction team and technical major of Nepal Army. “Now only a 600-meter stretch of the road is left to be widened. The width of the road varies from nine to eleven meters.”

“Blasting, drilling, and removal of soil and stones from the road are going on currently. Nineteen drilling machines and 40 jack hammers are being used for this,” added KC.

Five hundred 40 people have been deployed for the construction of the road, out of which 190 are from Nepal Army and 350 are general workers. The construction works are being carried out from 7 am to 5:30 pm, according to officials.

Five camps have been set up -- each in Mailung, Gumchet, Soley, Trishuli Dovan, and Syafru -- to give pace to the construction. A six-kilometer-long section from Simle to Mailung and another 17-kilometer-long section from Mailung to Syafrubesi were undertaken by the Nepal Army. The road will be handed over to the Department of Transport by the third week of April, according to army officials.

Major Sanjaya KC of Nepal Army, the chief of the Mailung-Syafrubesi road construction team, briefs Ramdhar Singh, the director of the Development and Construction Directorate of Nepal Army.

All border points in Karnali will come into operation: PM

BANIYANI(Jhapa), April 29: A total of 706 new industries were registered and came into operation in the last nine months of... Read More...