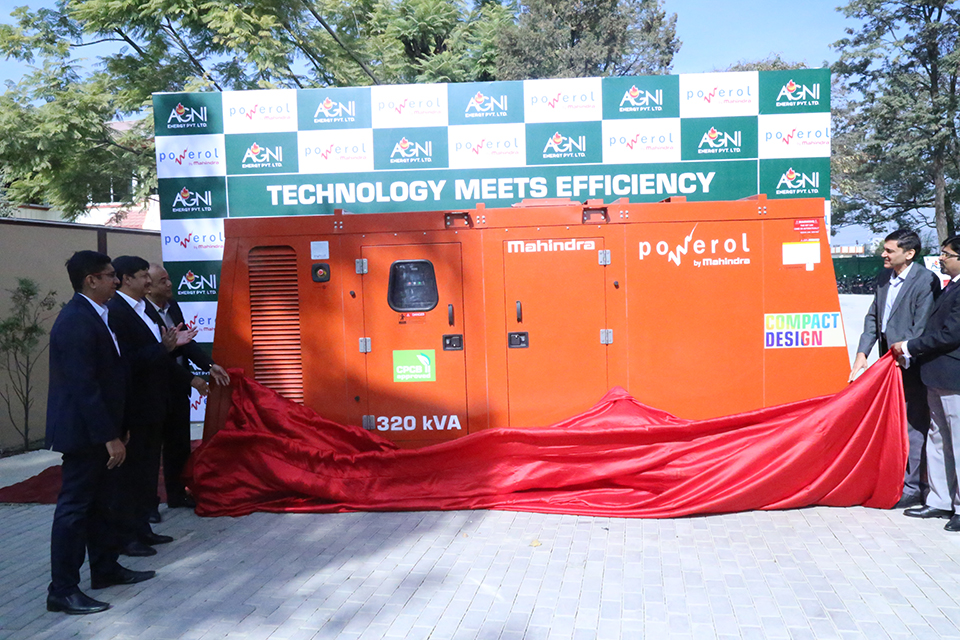 KATHMANDU, Nov 28: Mahindra Powerol Mahindra Group has announced its entry into the higher kVA diesel generators (DG) with the launch of its all new range of250/320kVA DGs powered by Mahindra mPower series engines.

The new range of 9.3Litre engine is the latest addition to Mahindra Powerol’smPOWER series and comes equipped with the technologically advanced CRD engines. It also showcased 5 kVA compact & portable genset, according to the press statement released by the company.

Stating that the CRD engines are powered with superior & advanced Common Rail Diesel Engine (CRDe) technology, the company has claimed that this technology will significantly reduces pollution by going beyond the standard emission norms.

The launch marks the foray into the higher kVA Diesel generator, which in turn will define a new segment and consumer group, the company has stated.

Currently Mahindra Powerol sells 7.5kVA-200kVA, diesel generator in Nepal, and with the launch of 3 new products – 5kVA, 250 kVA and 320 kVA, it further strengthened the commitment to market with three-fold value proposition for consumers- offering best in class fuel-efficiency, cost-effective end-to-end solution and total ownership that powers the customer’s business efficiently, thus enables him to focus on his core business.

Mahindra Powerol DG sets are supported by the widest service network in Nepal with Agni Energy. The network is very well equipped to provide immediate support to the customer. The team of experts can help to choose the most optimal and well-suited solution to help the customer in the least time possible.

SRIHARIKOTA/BENGALURU, July 22: India launched a rocket into space on Monday to perform a soft landing of a rover on... Read More...

Huawei Y9 to launch in Nepal in April

KATHMANDU, Mar 27: Huawei, a smartphone company is all set to launch yet another quad camera mid-range phone in Nepali... Read More...

KATHMANDU, March 17: Main opposition CPN-UML has said that the party will soon launch a special program for Province 2... Read More...