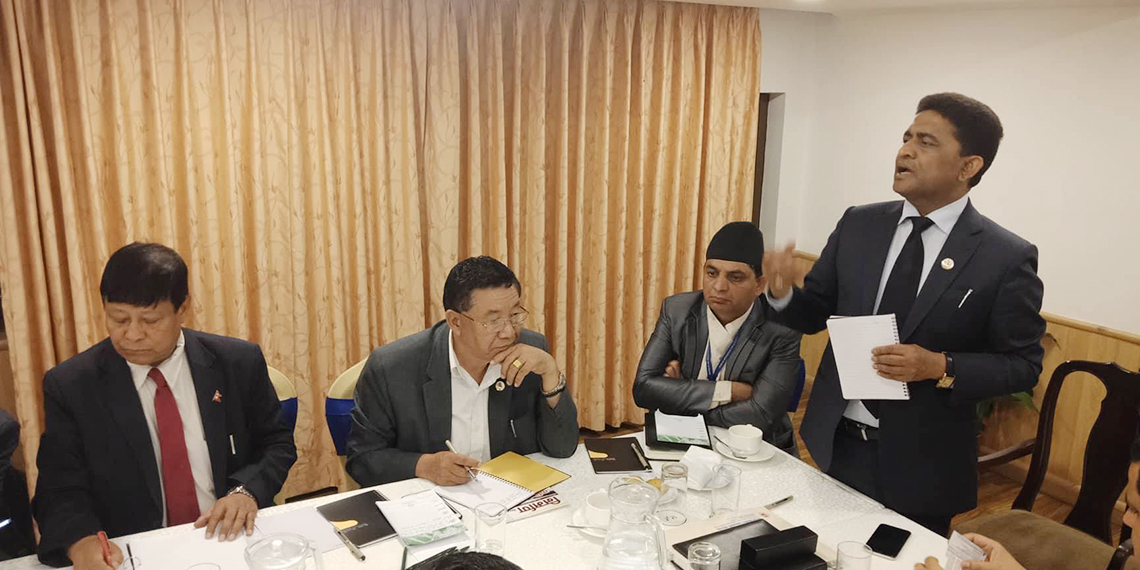 KATHMANDU, June 17: Public works contractors who had been dilly-dallying in completing their assigned work have resumed their work after the government started arresting and reprimanding such contractors over the past few weeks. Several non-performing and under-performing contractors were arrested and given stern warnings to complete their work on the orders of Home Minister Ram Bahadur Thapa.

The minister's statement shows that he is dissatisfied with the work of Minister of Home Affairs Ram Bahadur Thapa but he hasn't expressed his dissatisfaction openly, according to top officials at the Ministry of Physical Infrastructure and Transport.

Mahaseth's statement has come after his about a month-long silence on the issue.

Home Minister Thapa has ordered the district administrations to arrest non-performing and defaulter contractors and send their details to the ministry.

Contractors are not only to blame for the delays because preparatory tasks like clearing trees along the right of way, shifting the electricity poles and others works have not been done. -- Raghubir Mahaseth, Minister for Physical Infrastructure and Transport

After receiving a memorandum from the leaders of Federation of Contractors' Association of Nepal on Friday, Minister Mahaseth had said, “Contractors are not only to blame for the delays because preparatory tasks like clearing trees along the right of way, shifting the electricity poles and others works have not been done.”

FCAN had sought protection from the arrests by another ministry.

“This is the first time the contractors complained to me about the arrests related to the contracts signed with my ministry,” an MoPIT official quoted the minister as saying at the meeting with the contractors.

Chief District Officer of Kathmandu Kedarnath Sharma said that contractors have returned to the sites following their warnings and some arrests. “Also, we have been receiving reports that there have been progress in public works in various districts following our action,” added Sharma.

Sharma's office has collected details of about 300 under-performing and defaulter contractors and reported to the MoHA.

“We are also consulting the concerned project offices about delayed projects before initiating action against the contractors,” said Sharma adding that the objective of the ongoing action is to ensure that the public works are completed on time.

But contractors who gathered in Kathmandu three weeks ago for a special annual general meeting criticized their leadership as "only small contractors were being targeted by the government while big contractors have not been touched."

Small contractors complained that Sharada Prasad Adhikari, the promoter of Sailung Construction Pvt Ltd, who has defaulted on several contract deadlines, has not been subjected to action because he is friends with the co-chairs of Nepal Communist Party Prime Minister KP Oli and Pushpa Kamal Dahal. A photo of Oli, Dahal and Adhikari dining together at Adhikari's home had circulated on the social media a few months ago.

KATHMANDU, Nov 21: While Monday marks the 10th anniversary of the signing of the Comprehensive Peace Accord (CPA) between the government... Read More...

Over 10,000 people enter Nepal via Gaddachauki in a week for Dashain
21 minutes ago