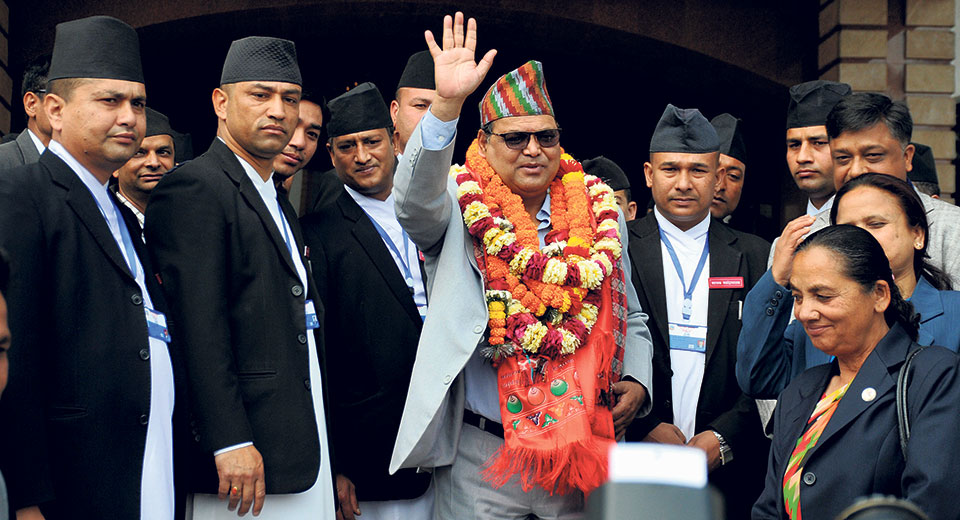 Krishna Bahadur Mahara of CPN (Maoist Center) waves his hand after being elected to the post of Speaker unopposed at the parliament building in New Baneshwar, Kathmandu on Saturday.Photo: Republica

KATHMANDU, March 11: Krishna Bahadur Mahara of CPN (Maoist Center) was  elected unopposed as speaker of the House of Representatives,  Saturday.

Eldest member of the lower house Mahantha Thakur announced Mahara's election as speaker at a house meeting after he emerged as the sole candidate for the post. President Bidya Bhandari will administer oath of office to Mahara on Sunday morning, prior to the house meeting scheduled for later  the same day.

Main opposition Nepali Congress (NC) also supported ruling left alliance candidate Mahara, maintaining the precedent of electing the house speaker unopposed. Supporting Mahara's candidacy at the house meeting, NC leader Minendra Rijal said the NC decided to second his candidacy as it expected that he would provide ideal leadership to parliament, given his gentlemanly and unassuming personality. "We expect that his election to the post will help  conclude the remaining tasks of the peace process and ensure coordination between the ruling and opposition sides in  parliament," he said.

Stating that government is likely to have two-thirds majority in  parliament, opposition leader Rijal urged Mahara not to allow the government to steamroller parliament and to respect the role of the opposition.

"House of Representatives has an important role in making the government responsible to  parliament, in implementing the new statute and formulating several laws envisioned by the constitution," said Nembang.

Five-times former minister and multiple times deputy prime minister Mahara was general secretary of the Maoists before the party's central body was dissolved a few years ago.  The school-teacher-turned-politician  was elected to the House of Representatives from Dang constituency-2.