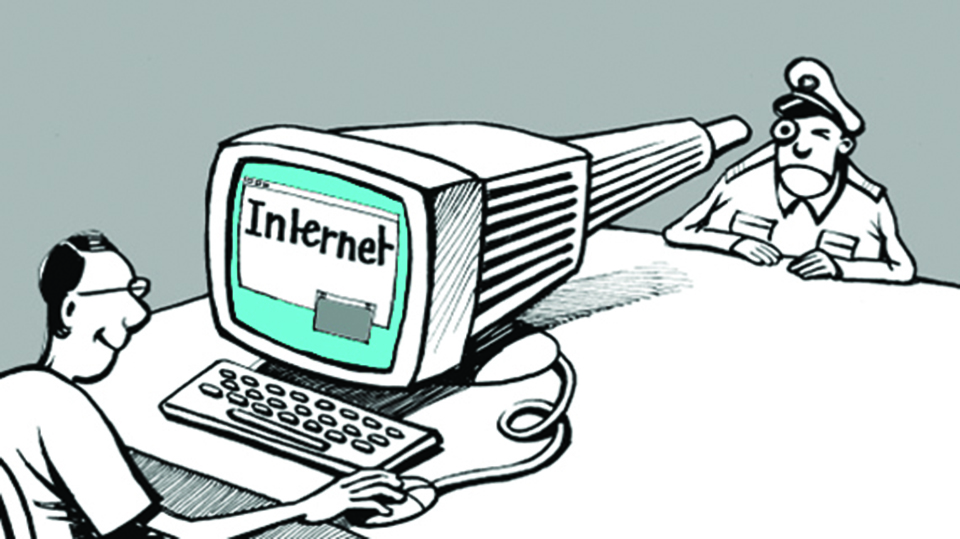 Creators of Internet never wanted the medium to be a hotbed for illegal  activities, mass surveillance, child pornography and cyber terrorism

The Internet has grown 1066 percent since 2000. By the end of this year, there will be a close to 4.5 billion Internet users around the world. People are now spending an absurd amount of time on social media every day. At the same time, we have also entered the age of no-privacy where everyone is open to Internet surveillance all the time.

It is now possible to buy goods, bank, watch movies, connect with friends and family, work, and even receive government services over the Internet. The more time people spend on the Internet the more vulnerable they are to mass surveillance. Even though some level of government monitoring is necessary to prevent social unrest, terrorism, and child pornography, if citizens are not wary, the privacy, Internet freedom, and free speech could be lost forever.

Mass surveillance is the practice of spying on an entire population. The authorities do have rights to collect data from well-defined targeted individuals to safeguard national security affairs, but they end up snooping into all aspects of people’s lives because modern surveillance technology works best when the entire population is watched. Sadly, many surveillance programs were set up with vague and obsolete laws designed for the pre-Facebook and pre-smartphone era. The laws have to be updated immediately, if privacy and free speech on the Internet are to be safeguarded.

France’s International Electronic Security Law permits the French Directorate General of External Security to monitor all communications on the Internet. The SORM laws permit Russian authorities to monitor online communication without a warrant. Syrians have also purchased advanced web censorship and cyber monitoring system. In North Korea, where Internet penetration is less than one percent, the government employs informants to constantly monitor and report any suspicious activities on citizen’s part. Unfortunately, all anti-government activities are deemed suspicious in tyrannical states like North Korea and Syria. People are often jailed for posting negative comments about the regime on social media. On the contrary, most social media posts are protected by the free speech clause in democratic countries.

Does that mean we have come to the point in time where cyberspace is no longer sovereign? John Perry Barlow, the founder of Electronic Frontier Foundation, published  Declaration of the Independence of Cyberspace in 1996, which read, “Governments of the Industrial World, you are weary giants of flesh and steel, I come to the Cyberspace, the new home of Mind. On behalf of the future, I ask you of the past to leave us alone. You are not welcome among us. You have no sovereignty where we gather.” In a nutshell, the manifesto has one simple message: Governments don’t and can’t govern the Internet.”

A lot has changed since then. Now, the Internet is also being used to promote terrorism, spread infectious anti-social ideologies, trade human organs, and promote child pornography, to name a few. In 2011 at G8 conference, then French President Nicolas Sarkozy highlighted the importance of making the Internet civilized. “The universe that you represent is not a parallel universe which is free of rules or ethics or of any of the fundamental principles that must govern and do government the social lives of our democratic state,” he said to the civil society and the private sector in a way opposing Barlow’s utopian ideals.

Barlow believes his declaration is still relevant. He argues the governments have not been able to control the Internet. For instance, WikiLeaks and online black-market Silk Road sprung out of nowhere even under the watching eye of governments around the world. The authorities have managed to confine Wiki Leaks founder inside the Ecuadorian Embassy in London and jail the founder of Silk Road. But, WikiLeaks is still running and Silk-Road style markets still thrive in the deep web illegally generating billions of dollars. File-sharing applications like Napster and MegaUpload were also shut down, but the file-sharing protocol BitTorrent’s user base is increasing by the day.

The creators of the Internet never wanted the medium to be a hotbed for illegal activities, mass surveillance, child pornography, and cyber terrorism. Furthermore, the online space is now almost broken due to abuses, bias, polarization, and fake news. Most did not expect humanity connected by the Internet to function in such a dystopian way. Hence, it is time to step back to examine the responsibilities we have as humans to make sure the web delivers on its promise. It is extremely important for the government, private sector, civil society, and academia to collaborate if the online space is to be made safer for everyone.

Sir Tim Berners Lee, the inventor of the World Wide Web has taken the leadership role to fix the Internet.  Recently opening the Web Summit in Lisbon, he called on the world to back a new “Contract for the Web (Magna Carta of the web,”).”  The Contract has been formulated not only with aims to protect people’s rights and freedoms online, but also make sure the Internet is used to serve humanity, science, knowledge, and democracy. Many who initially supported Barlow’s declaration now have started to believe the “Declaration of Independence of Cyberspace” needs to be updated with “Declaration of the Interdependence of Cyber Space.”

The United Nations is also supportive of safeguarding people’s privacy on the Internet and recently announced, “the right to privacy is to be protected online as it is offline and no one should be subjected to arbitrary or unlawful interference with their privacy, family, home, or correspondence, and the right to the protection of the law against such interference.”

Surprisingly, it took the world more than two decades to come to its senses and realize the Internet is broken. The new ‘Contract’ is a progressive step towards protecting and enshrining the independence of the Internet. Facebook, Google and prominent personalities like Richard Branson and Gordon Brown are backing the ‘Magna Carta’ to ensure the Internet is used for the betterment of humanity and not vice versa.  Barlow argues that “the arc of the Internet’ history is long, but bend towards independence.”

It will not be possible for governments to control the Internet in the world that heavily tilts towards democracy. The middle path between surveillance and Barlow’s revolutionary declaration is probably the way forward.

Shakya is a visiting Professor at Brown University and Shah was a fellow at the United Nations University, International Institute for Software Technologies