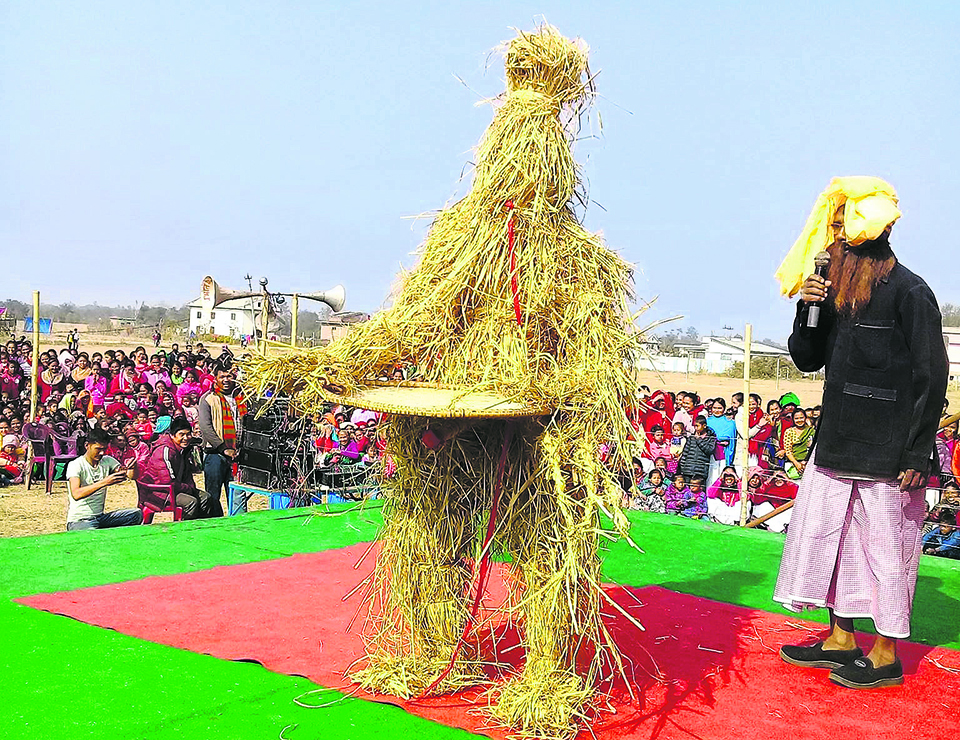 Photos: Devendra Basnet/Republica Tharu community members participate in the celebration of the Maghi festival, organized in Dang on Saturday. This year the community will be celebrating the festival on January 15.

DANG, Jan 14: Earlier, the thought of Maghi would bring tears in the eyes of Kamlari Krishna Chaudhari, who is now the deputy speaker of Province - 5. While the family members of her landlords family, where she would work as a bonded labor, would make a fanfare, she would sneak to a corner and shed tears in silence. Her workload would double and there would be no time even to sleep.

Chaudhari spent many years in the landlord’s house as a Kamlari (bonded labor). And every Maghi gave her additional pain. “I went to landlord’s house when I was just seven. Since then, Maghi turned out to be a curse instead of a festival,” she reminisces. “I would not have sufficient clothes on my body, I would shiver due to cold and yet, I had to work hard from dawn to dusk for entertaining the landlord’s family.”

All Kamalaris in Dang can relate to this story. There could be some exceptions, but in general, the life of the Kamlari girls was equally miserable. “When we look back, it feels like a nightmare. We went through something very horrible,” Chaudhari states.

In 2000 and later in 2006 the government took actions to abolish this traditional slavery system. Kamaiyas (male bonded labors) and Kamalaries were freed. However, in the lack of better options, many continued living under the shadow of their landlords.

“Over the time, we have managed to get free of the slavery in real term. These days, many Tharus are living an independent life, though there are rooms to improve their overall lifestyle,” Chaudhari recounts.

With the change in the life of Tharus, there has come a change in the way they celebrate festivals. And Maghi celebration is a great indicator of this. “Unlike in the past, very young girls and boys are seen busy in making preparation to celebrate the festival. Before the abolition of the Kamaiya and Kamlari practice, most of the Tharu youngsters worked as slaves,” Chaudhari stated.

Another Tharu leader Shanta Chaudhari recalls similar Maghi experiences. During Maghi her family and landlord would decide if they are to continue serving the same landlord or would have to find a new one. “So, during Maghi, they would decide where would serve as slaves,” said Shanta.

Maghi is just two-day away. And girls and boys in Dang are in great festive mood to celebrate it. Shanta looks at it as a great symbol of change. “Yes, things have changed for us, Tharus are celebrating Maghi freely and happily unlike in the past.”

Tharus in Dang has decorated their home as well as public areas in order to welcome Maghi. Out of the total 555,000 Tharu population, over 30 percent of them live in Dang, the 2011 Census Report shows.

PANCHTHAR, April 16: It is situated at an altitude of 3,340 meters from the sea level. Herds of yak were moving... Read More...