KATHMANDU, Jan 15: The Maghe or Makar Sankranti is being observed throughout the country today by taking holy dips in rivers and ponds, worshiping at various temples and savoring various delicacies like ghee, yam, khichadi and sweets like Chaku and sweets made of sesame and molasses.

On this day, the sun moves from tropic of Sagittarius to tropic of Capricorn. It is believed that the days get longer and nights shorter from today itself. According to ‘Bhabisya Puran’ and ‘Dharma Sindhu’, religious texts, devotees will get special blessings and will have robust body if they observe the festival as per the rituals. The Newar Community observes the festival by taking ghee, chaku and remembering the departed souls. This festival is called as ‘Ghyo Chaku Sallnhu’. 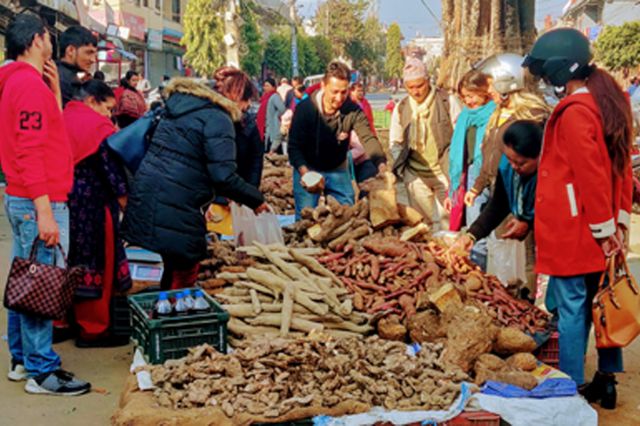 The seniors apply mild-hot edible oil to heads of juniors on this day. A large number of devotees throng Devghat, Barahchhetra, Ridi, Panauti, Dolalghat and Kankai in Nepal and Prayag and Gangasagar in India to take a holy bath and perform Sharaddha. The festival has significance in view of Ayurveda and medical science also.

Food items that are taken on this day are the sources of balanced diet which increase the immunity power of the human body. On this day, a festival is organized at the Tilmadhav Narayan Temple at Taumadhi Tole, Bhaktapur and pooja of Deepakankar Buddha is performed. The Tharu Community observes this festival as the Maghi with much fanfare and gaiety for five consecutive days. Likewise, the people in the Tarai belt mark this day as the festival of bath known as Nahan. 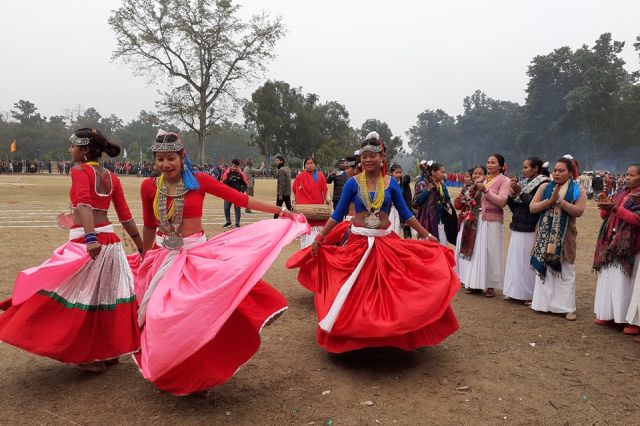 In her message, President Bhandari has wished further strengthening of national unity with the spread of peace and happiness among the Nepalis. She extended her best wishes to all the Nepalis sisters and brothers at home and abroad. Bhandari said that unique cultural heritages as such festivals had helped had played a vital role to make our country be known across the globe.

The message reads, "I am confident that our festivals would help maintain common Nepali identity by fostering the cultural and communal diversity." Maghe Sakranti is observed on the first day of Nepali month of Magh. Various communities observe the festival with fanfare as per their tradition. The Tharu community observe this particular day as their New Year. On this day, people bathe and perform rituals and eat special delicacies such as sweets made up of sesame seeds, sweet potatoes and yam, among others.

Likewise, in his message, Prime Minister Oli stressed the need to capitalize unity and tolerance for the country's development.

PM Oli has wished for good health, peace, progress and prosperity to all Nepali sisters and brothers at home and abroad on the occasion of Tharu community's festival Maghi and Makar Sankranti. Nepal is a country characterized by improved unity amidst multi-ethnic, multi-lingual, multi-religious and multi-cultural diversities and the government has been protecting these priceless properties, PM Oli said, stressing the need to capitalize the improved unity and tolerance for country's development.

The festival is celebrated in different parts of the country on the first day of Magh (January 15) when the sun enters into its northward journey from southward. In the message delivered on the occasion, he further noted, "The indigenous festivals celebrated in our country are not only associated to ancient cultures but also to natural science. These festivals have strengthened our mutual harmony, tolerance and improved unity".

Especially, chaku, khichadi, ghee and yams are served and consumed during the festival of Maghe Sangkranti. The festival is also spectacular from health perspective as people consume nutrient foods to keep the body warm and take holy dips in the rivers. The indigenous Tharu community celebrates the Maghi as their greatest cultural festival.

Ubhauli festival being observed with fanfare (with photos)

KATHMANDU, May 18: Kirant Community has started celebrating Ubhauli festival in Nepal with much gusto. ... Read More...

LAHAN, Oct 7: Teachers of the Pashupati Higher Secondary School, Lahan have padlocked their school for not being paid for... Read More...