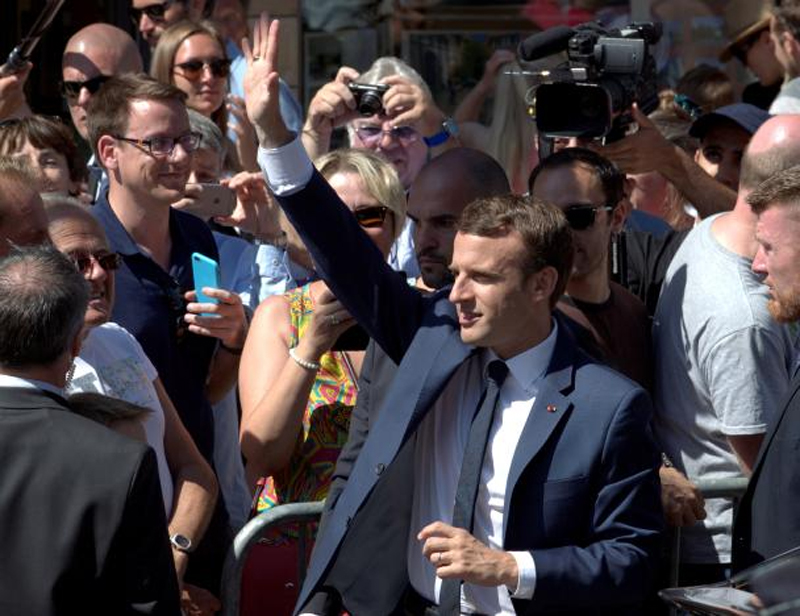 PARIS, June 12: President Emmanuel Macron's fledgling party is set to trounce France's traditional main parties in a parliamentary election and secure a huge majority to push through his pro-business reforms, projections after the first round showed on Sunday.

The vote delivered a further crushing blow to the Socialist and conservative parties that had alternated in power for decades until Macron's election in May blew apart the left-right divide.

With 90 percent of voters accounted for, Macron's Republic on the Move (LREM) and Modem allies had won 31.9 percent support, Interior Ministry results showed.

The conservative party The Republicans and allied center-right Union of Democrats and Independents held 18.9 percent, the National Front 13.8 percent and the Socialists 7.45 percent.

Pollsters project Macron's alliance could win as many as three-quarters of the seats in the lower house after next week's second round of voting.

That would give France's youngest leader since Napoleon a powerful mandate to make good on campaign pledges to revive France's fortunes by cleaning up politics and easing regulations that investors say hobble the euro zone's second-biggest economy.

"France is back," Prime Minister Edouard Philippe said on French TV. "Next Sunday, the National Assembly will embody the new face of our republic."

Voter turnout was a record low for parliamentary elections in the post-war Fifth Republic at 48.6 percent, taking the shine off Macron's margin of victory in the first round.

Both the Socialists and the conservative Republicans urged more voters to cast their ballots in the June 18 second round, warning them against allowing too much power to be concentrated in the hands of one party.

Macron professes to be of neither right nor left. His one-year-old LREM party fielded both seasoned veterans and political novices including a former bullfighter, a fighter pilot and a former armed police commander.

"It's a renewal of the political class," said Jose Jeffrey, a Health Ministry administrator who voted LREM.

Projections by three pollsters of LREM's tally after the second round ranged from 390 to 445 of the assembly's 577 seats - potentially the biggest majority since president Charles De Gaulle's conservatives won more than 80 percent of seats in 1968.

Macron, a former investment banker, wants what supporters describe as a "big bang" of economic and social reforms, including an easing of stringent labor laws and reform of an unwieldy pension system.

The pro-European leader's program enjoys strong support among liberal, well-educated voters in France's big cities, but he is less popular in poorer areas where industry is in decline.

Sunday's projections pointed to another torrid night for the two main traditional parties, which have suffered high-profile defections to Macron’s government, as well as the far-right National Front.

The Socialist Party suffered in particular. Its chief, Jean-Christophe Cambadelis, confirmed he had been eliminated from his long-held Paris seat, a symbol of his party's stunning demise after five years in power. Benoit Hamon, its failed presidential candidate, was also headed for the exit door.

Cambadelis acknowledged that the first round marked an "unprecedented" setback for the party, set to win a paltry 30-40 seats, and the broader left.

"It is neither healthy nor desirable for a president who gathered only 24 percent of the vote in the first round of the presidentials and who was elected in the second round only by the rejection of the extreme right should benefit from a monopoly of national representation," Cambadelis said.

Francois Baroin, who led the campaign of the conservative Republicans, projected to win 80-100 seats, echoed the sentiment.

National Front leader Marine Le Pen, who led the voting in her northern constituency, called the huge abstention rate "catastrophic" and urged supporters to turn out in a week's time.

Pollsters projected her party, which is still reeling from her disappointing showing in the presidential run-off vote against Macron, will next week win just a small handful of seats - perhaps as few as one.

Among the LREM political newcomers who went through to second round were his key ministers and a retired bullfighter.

KATHMANDU, Feb 8 :  Indra Baniya has been elected as the Parliamentary Party (PP) leader of  Nepali Congress for Province-3... Read More...

UPDATE: Nine die, nine injured in landslides in Kaski and Lamjung
55 minutes ago

At least 11 missing in Myagdi floods
59 minutes ago