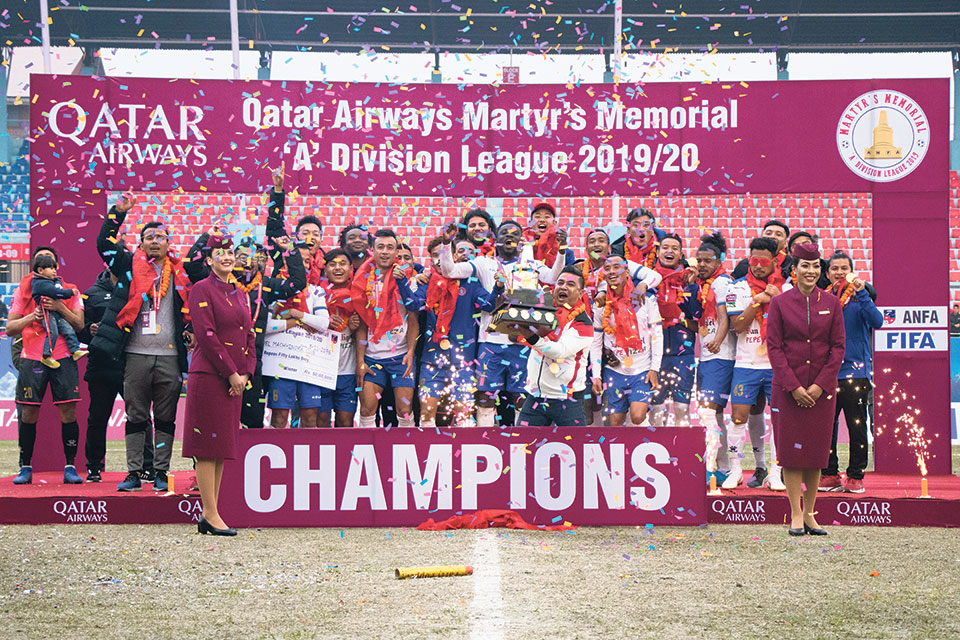 Members of Machhindra Club pose with the trophy after winning the Martyr's Memorial A-Division League at the Dasharath Stadium in Tripureshwar, Kathmandu on Saturday. Photo Courtesy: ANFA

KATHMANDU, Feb 16: Machhindra Club has been crowned the champion of the Martyr's Memorial A-Division League for the first time in its history as Bikash Tamang's own goal sealed a 1-0 win against the departmental team Tribhuvan Army Club in Kathmandu on Saturday.

Machhindra, who was promoted to the first tier of Nepali football in 2004, has seen some few ups and downs. It finished sixth in the first four seasons in the A-Division League, and did not participate in the National League in 2011-12. It was then banned by the All Nepal Football Association (ANFA) and could not again play in the National League despite finishing second in the league in 2013-14.

After a disastrous 2018-19 season, where it finished 13th and got a point deducted this season for that, it has been in cruising mode all season as it bought majority of its players from Three Star Club and Manang Marshyangdi Club and now has won its most coveted title in its history.

In the final title deciding match played at the Dasharath Stadium, Army's Bikash Tamang's own goal was all but enough to win the title for Machhindra and surpass Army in the points table as the teams were just separated by a point prior to the game.

Machhindra had the better of the two teams in terms of shots and shots on target, despite having less possession of the ball. Machhindra held the possession well in the early part of the game with pressure from the wing play, but could not hit shots to threaten Army goalkeeper Bikesh Kuthu.

Army then started to pressurize Machhindra with constant breakage of possession and recovered the ball very well with high pressure up the pitch. It held the possession afterwards, but could not work on its shots as the teams could not create good chances.

Before the creation of a real chance, Machhindra drew the first blood. Ranjit Dhimal took a free-kick which was destined for the back of the net, but Bikash tried to clear the ball and ended up having his name written over it as an own goal in the 31st minute.

Andres Nia had a chance to double the lead for Machhindra as he beat two defenders with his fine dribbling, but a shot from just the edge of the box went wide in the second minute of the injury time.

Army switched its tactics to attacking gears after that as it needed a goal desperately since even a draw would have sealed a title for the departmental team, which was also looking for its first top-flight league title.

Machhindra kept having shots after shots, while Army only looked to find a clear opening and did not fancy long shots from outside the box and it backfired with Machhindra getting chances after chances to bury them, but could not add more goals to its tally.

Somide hit a right-footed shot from the opposition box, but hit it over the bar in the 66th minute, while Army got a good chance through captain Bharat Khawas, as his header from a close range went wide in the 68th minute.

Army really switched to attacking mode after that as Tanka Bahadur Basnet put a good cross inside the box, but it was saved by keeper Bishal Shrestha in the 79th minute.

Up to the 83rd minute, Army had no shots from the box and looked wasteful with its possession as it could not convert any of the long rangers and kept giving away possession cheaply time and again.

Bikash had a chance to equalize for Army, but his shot in the first minute of the injury time was cleared brilliantly by Bishal Rai B. Then Andres Nia produced a superb tackle to deny any shots from Army.

Machhindra had been brilliant all season in scoring goals, as it scored the highest goals in the league with 25 goals scored, which is four more than what the second-placed Army scored. It also conceded just eight goals, which is just one more than what Army conceded all season.

Bishal Rai B of Machhindra and Army's Bharat Khawas were given the prizes for the best midfielder and the best forward respectively. Prabesh Katuwal won the award for the best coach. They all were rewarded with a cash prize of Rs 150,000 each.

The top six finishers in the league were Machhindra, Army, Manang, Three Star, Nepal Police Club and Jawalakhel Youth Club. They will play in the National League. 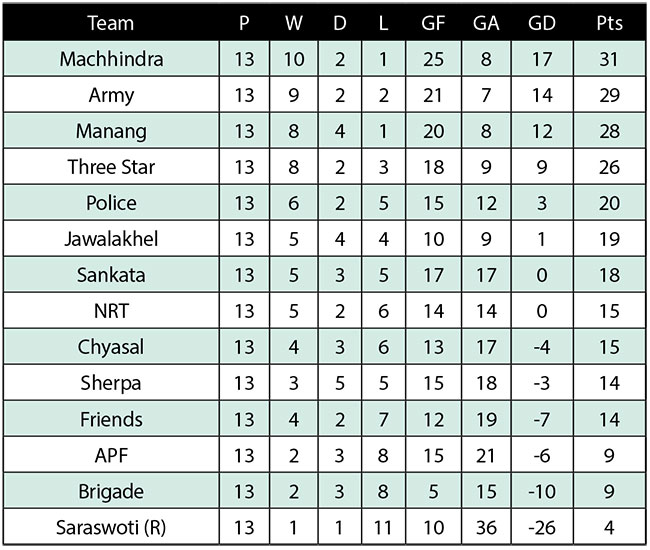