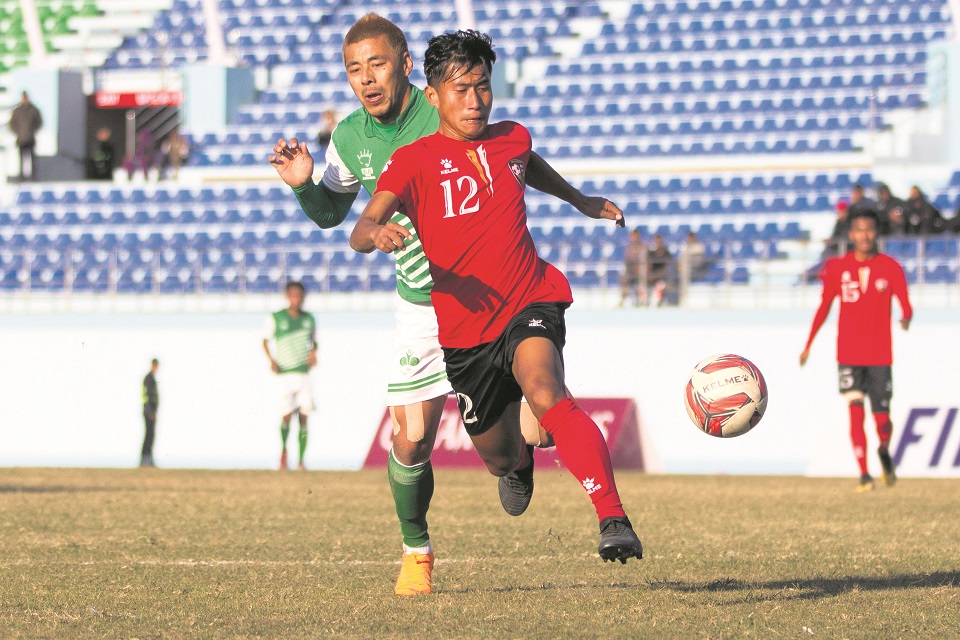 KATHMANDU, Dec 26: Machhindra Club got back to winning ways as it registered a dominant 3-0 win over Friends Club to reach the top of the table in the ongoing Martyr’s Memorial A-Division league in Kathmandu on Wednesday.

In the other game played later on the same day, Santosh Shahukhala failed to score for the first time this season as Chyasal Youth Club faced its first defeat, 2-1, at the hands of New Road Team (NRT). With that, Shahukhala has stayed intact on 99 league goals, failing to reach the century mark against a relatively weaker NRT side.

In the first match of the day played at the Dasharath Stadium in Tripureshwar, goals from center back Peter Segun and forwards Somide Olawawunmi Adelaja and Rejin Subba ensured a convincing win for the leader, who has not lost a single game this season.

Machhindra was dominating throughout the course of the match as it maintained the possession, created a streak of chances, and scored three goals to deny Friends an opportunity to come back at any point of the game.

Abhishek Rijal got an early chance for Machhindra in the third minute as he hit a shot from outside the box, but the ball went over the bar.

Friends sat back and defended, while Machhindra was looking for opening in the middle part of the pitch. It opted to go from the flanks, and that’s when the game changed.

Machhindra did not let Friends get any more chances with good pressing high up the pitch and blocking all the en routes to goal. It concentrated on getting the ball into the box, but Friends defended pretty well.

The winning team got two quick chances in the space of two minutes as Bishal Rai hit a good free-kick in the 21st minute, but it was saved by Friends goalkeeper Dev Limbu. Likewise, Buddha Limbu’s right-footed shot was saved again two minutes later.

Segun finally gave Machhindra the lead as his persistence paid off in the 28th minute. Rejin Dhimal hit a cross, but the ball was punched away. However, Segun headed the ball into the net and scored the first goal of the game.

Friends got a bit nervous after that and kept giving the ball away a lot. Machhindra kept on creating with Rijal in the thick of things.

Rijal took the ball inside the danger box, laid it off to Buddha Raj Limbu, but the former Three Star man missed a simple tap-in in the 32nd minute.

The second-half was more of the same as Machhindra kept getting chance after chance, while Friends sat back with a 4-5-1 system.

Bishal Rai produced a moment of brilliance as his flick of the ball gave a superb assist to Somide, who put the ball into the back of the net in the 51st minute.

Rejin Subba then scored his first goal of the season to kill the game completely and make the score 3-0 five minutes from time. Somide hit a shot, but was blocked by a Friends defender. Subba then converted the chance for the third of the match.

Despite the win, Machhindra has six points from three games with two victories and a draw. It got its one point deducted for finishing second from bottom last season.

In the late kick-off, Chyasal was unable to convert a series of good chances into goals as the team failed to beat a 10-man NRT in the game which promised a 100th league goal for Shahukhala.

Junior Onguene Nikengue opened the scoring for NRT completely against the run of play as he headed in a cross from Arik Bista in the 23rd position.

However, NRT was getting a lot of chances, but its shots and free-kicks were wasted by poor deliveries into the box.

Chyasal prioritized the crossing, but the ball was cleared by the defense as both the teams focused on keeping their system balanced and up for counter attacks.

Sunil Bal got a good chance to equalize in the 39th minute, but his shot was saved by NRT keeper Ajit Prajapati.

Chyasal held the ball brilliantly nearing the end of the first-half and in the majority of the second, but could not score.

A solo goal from Darsan Gurung sealed the win for NRT despite a late Chyasal fightback. Gurung dribbled the ball from his own half, and then took a ball to the danger box in counter attack to score a brilliant goal in the 86th minute.

NRT was frustrated with a late red card for Jordan Junior Ndemba Owona, but Chyasal could not take advantage of that.

Amir Shrestha scored a goal in the last minute of the injury time, but the game was done.

With the result, NRT has shot its way to the third place with four points with two wins and a loss. Two of its points were deducted for finishing bottom last season.

Third round of 'The Martyrs A-Division League' concludes

KATHMANDU, Dec 29: The so called back bone of Nepal's Football Games 'The Martyrs Memorial A- Division League' is being... Read More...

Revenue collection from mountain climbing doubles this year
34 minutes ago