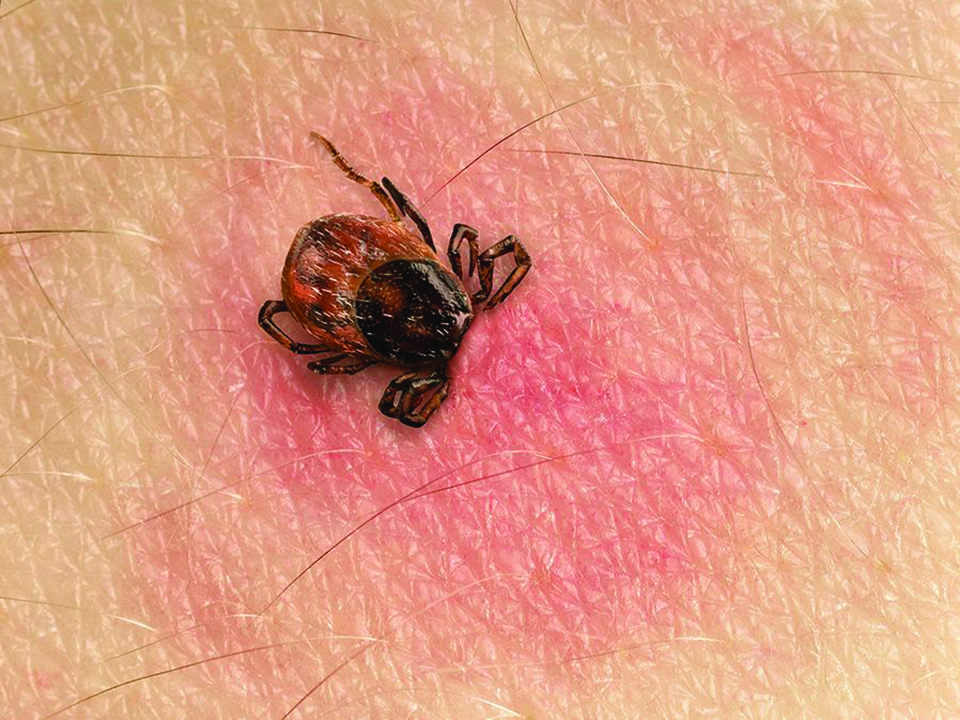 Not only general people but also healthcare providers seem to be unaware of tick bite and Lyme disease in Nepal. It’s urgent to raise aggressive campaign against it

A few days back, a previously healthy 57-years old man came to the outpatient department of Sukraraj Tropical and Infectious Disease (STIDH), with a history of sudden onset of fever, headache, fatigue, sleep disorders, tingling, pricking, burning sensation over neck/arms, and enlarged right inguinal lymph node. These signs and symptoms developed approximately two weeks after a tick bite on his right buttock.

A red patch developed and it gradually expanded with central darkening, hemorrhage and necrosis.  The patient is currently under treatment and is getting better gradually. The number of patents like him with similar signs and symptoms after tick bites has increased unexpectedly over the past few months.  They are the victims of Lyme disease.

Lyme disease was first clinically observed, laboratory confirmed and reported by this author in the early 2018 in Nepal. But what is Lyme disease anyway? Is this disease unnoticeably spreading in Nepal?

But if Lyme disease is suspected, early empiric treatment can be initiated. History of tick bite, history of travel to Lyme endemic areas, signs and symptoms consistent with Lyme disease can help begin an empirical therapy.

Early symptoms include fever, headache, fatigue, swollen lymph nodes and joint muscle aches.  Nearly 80 percent of the infected person develops erythema migrans (EM) rash, and it is considered as a hallmark of Lyme disease. It may appear on any part of the body. EM usually goes unrecognized when it is developed on the part of the body the patient cannot easily see.  Early signs and symptoms appear three to 30 days after the tick bite. If these early signs and symptoms are missed or ignored, it may lead to long-term problems related to heart, nerve and joint. Heart palpitations or irregular heartbeat, inflammation of the brain or spinal cord (shooting pain, tingling sensation in the hands or feet, numbness, short-memory issue), and severe joint pain and swelling (particularly of knees and other large joints) are the main signs and symptoms that appear in the later stage of this disease.

For the first time, one patient suspected of having Lyme disease (based on clinical signs and symptoms) was diagnosed with retro-bulbar optic neuritis (vision loss), a rare complication of Lyme disease. Thus specialists such as neurologists, cardiologists, rheumatologists and ophthalmologists must also keep the possibility of Lyme disease in their mind while examining patients with history of tick bites and fever.

Lyme disease is the most commonly reported vector-borne disease in the US and Europe. It is caused by the bacterium and is transmitted through the bite of an infected tick known as “Ixodes”. An “Ixodes” tick is a blacklegged with a hard-bodied tick that is usually found under leaf litter. Albeit limited, some studies show that Ixodes ticks are present in the Himalayan region of India. Cases of Lyme disease are reportedly increasing in different parts of India in the recent years.

A researcher in 2004 confirmed the existence of Ixodes tick in Nepal. Thus it may have been existed in Nepal for many years. Therefore it is reasonable to assume that hundreds of Lyme cases might have been missed or being missed both in India and Nepal.

Shrew bite is reported at Sukraraj Tropical and Infectious Disease Hospital almost every day, which means Lyme disease may be more widespread than it is thought.

In Nepal, most people who are bitten by ticks usually do not go to hospitals, unless they develop signs and symptoms. In some cases, even after signs and symptoms are noticed, health workers do not do careful examination after being bitten by ticks nor think about its health consequences. It shows that not only general people but also healthcare providers are unaware of tick bite and Lyme disease in Nepal.

Tick bite illnesses are being increasingly reported over the past few months. Thus there is an urgent need for aggressive campaign against Lyme disease in Nepal. This should include continuing medical education (CME) programs for physicians too.

Perhaps tick bite illnesses, particularly Lyme disease, are becoming one of the unrecognized public health threats in Nepal.  More research is needed to understand Lyme disease and its vector and to identify the most prevalent locations of this disease. Most importantly, Nepal needs to be prepared to offer cure to people who suffer from this diseases and prevent its long-term complications.

Not enough research on Kala-azar: Experts

KATHMANDU, Dec 28: ‘Living with Parkinson’s disease’, a documentary video is scheduled to screen at the auditorium hall of Nepal... Read More...