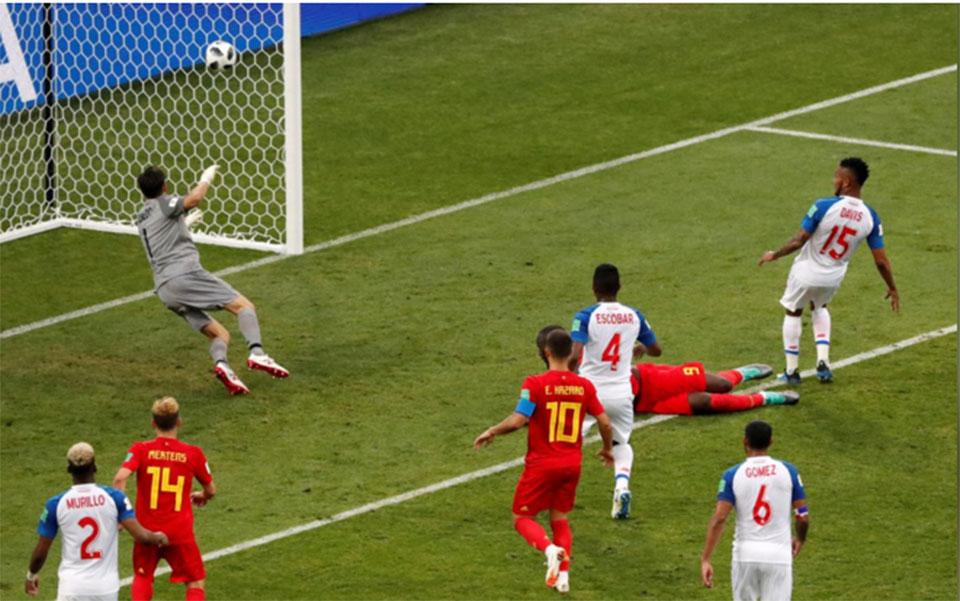 SOCHI, June 18: A stunning volley from Dries Mertens and a Romelu Lukaku double broke the resistance of a brave Panama side on their World Cup debut as Belgium cruised to a 3-0 win in their opening Group G game on Monday.

Mertens hammered home a superb volley two minutes into the second half, sending the ball arcing over Jaime Penedo after Panama struggled to clear a cross.

Lukaku’s hard work up front was rewarded when he headed home Kevin De Bruyne’s brilliant pass off the outside off his foot to make it 2-0 in the 69th minute and the big striker latched on to an Eden Hazard pass to complete the scoring with a neat finish.

The announcement of the first team to represent the Central American nation at the World Cup finals was greeted by an ear-splitting roar from the thousands of flag-waving Panamanian fans dotted in clusters around the Fisht Stadium.

The debutantes endured a shaky start as Lukaku went close for Belgium in the opening minute after an incisive pass from De Bruyne set Yannick Carrasco free down the left, but the striker fired wide.

Despite being forced to spend much of the game defending, the Panamanians showed strength, speed and trickery when they did break forward, and they created chances of their own in a scoreless first half.

Belgium wasted no time in the second period as Mertens quickly opened the scoring and as the underdogs started to chase an equaliser the space opened up.

The Belgians showcased an array of clever set-pieces and will be happy with their performance against a physical Panama side ahead of games against Tunisia and England, who meet in Volgograd later on Monday.

“That first win in the World Cup is always a special moment. Panama, as we expected, played very organised, very well-drilled (but) we were patient,” Belgium coach Roberto Martinez told reporters.

“The second half, that little bit of quality of Dries Mertens and then Eden Hazard and Romelu Lukaku with Kevin De Bruyne being instrumental in those attacks.”

OPENING GOAL
The opening goal came as a relief to the Belgians, who have seen other favourites struggle against well-organised opponents in the opening round of World Cup games.

“It was tough. A long run-up to the World Cup and finally you have the first match and everybody expects so much,” Martinez said.

“You have such an urge to run and do your thing and then you notice your legs don’t co-operate. You see it with every team in their first match. I hope the second match goes better,” the Spaniard added.

The Belgians put their slow start behind them in the second half as their passing game started to click, but Panama still managed to find opportunities for counter-attacks and were unlucky not to score.

“It is a result that can’t be positive because we lost 3-0 but they could have won by a landslide,” Panama coach Hernan Dario Gomez told a news conference.

“I think we did a good job - some people thought we would lose by seven goals but it was only 3-0,” he said.

MOSCOW, June 23: Two goals each for Romelu Lukaku and Eden Hazard and one for Michy Batshuayi swept Belgium to a... Read More...

KATHMANDU, June 18: Double from Lukaku and a full volley stunner from Mertens sealed the victory for the Belgium against... Read More...

Cabinet meeting underway in Baluwatar, likely to endorse recommendations made by CCMC to contain spread of COVID-19
12 hours ago