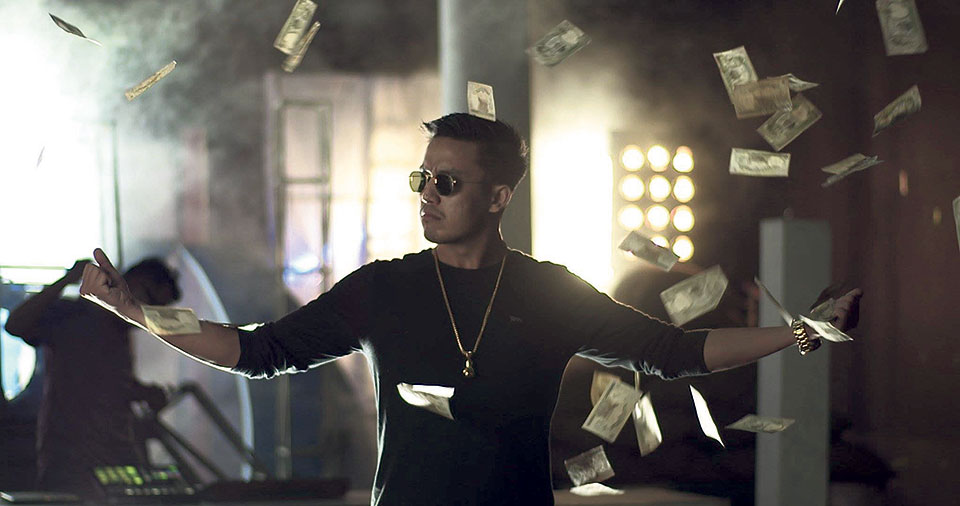 What with all the Himalayan Roadies posters around town it’s hard to miss the rapper, Laure (Asis Rana), these days. As it is, it wasn’t like he wasn’t well known and well admired already; his recent releases and album launch party was testament to his fan following. Views on YouTube are more than two million and the crowds’ attendance was tremendous.

Even when we talked to him, he was on his way to the Australian Embassy to make arrangements for a Sydney gig. Further, the rapper also reveals that he is planning to release a new tune, the first collaboration with an international music producer, very soon. Here with The Week’s Priyanka Gurung, Laure reflects on his career so far and also gives us an exclusive peek into his playlist.

Nepal has many underground rappers but, unlike you, they tend to struggle to go mainstream, what do you think helped you there?

It’s never just one thing. You obviously have to work hard and commit yourself to your art but personally, I feel like I have had some luck in this regard. I never felt like I had to struggle a lot. I didn’t have any kind of strategy or plans.

I was first introduced to the masses through Raw Barz and I think both the platform and I helped each other get a certain level of hype. But after that I just continued to persevere with my work and a lot of things fell into place. That’s where luck played its part. There may be better rappers than me out there but, for some reason, many find themselves limited to the underground crowd. So that’s why I say it is never just one factor alone. Along with hard work and dedication, it seems you need some luck as well.

Almost all of your songs have had good reviews, how do you plan to release new music?
Like is the case with most rappers, I too tune into the hot topics. Whether it is the consequences of the earthquake or a tribute to a dear friend, I just write about the things that are running through my mind. But I like to take time with it.

I slowly build ideas around my topic of interest and put in a lot of effort to articulate them. It’s really like the process of giving birth. You can’t rush it. I give my songs all the time it needs to develop and I only release them when I am completely satisfied with them. During the latter stages, I also consider things like how they will be perceived by the fans as well as the masses and accordingly work on how the song needs to be presented.  As a result, you can see, I have the least number of releases among mainstream rappers.

The concept of your videos is also always interesting. Do you have a say here as well?
The themes of my videos often develop as I’m writing the songs. As I work on the lyrics, I also visualize the video.  It’s always been that way.

The ideas come at the same time. I used to collaborate with a friend initially but since he is abroad now The Basement Independent have been helping me direct the videos and my own production house, Bad Company, produces them.

You have also started incorporating other genres into your songs, how did that idea come about?
The idea definitely came about later in my career. I started realizing that compared to pop or metal fans, the hip hop audience in Nepal was pretty small. I thought incorporating other genres in my music would be a good way to appeal to more people. I want to take my music to as many people as possible.

This has proved to be an interesting challenge. Being genre specific and working with hip-hop beats are very easy for me. Bringing in live instruments and DJs, on the other hand, was totally different. It was even difficult at times. Nevertheless, I practiced a lot, more than I used to and the results have been good so far.

So has the plan worked? Do you feel like your fan base has grown?
Yes, it does feel like it. Whether it is the YouTube comments or personal meetings with people, I have had many approach me and share how they weren’t fans of hip-hop but still like my new music. Many claim to only listen to rock for instance, but apparently they also find some of my songs appealing. So I do think it’s working.

There are certainly some naysayers as well. There are ones who argue that I should have stuck to pure hip-hop beats but, unless the criticism is constructive, I ignore negative comments. Those with malicious intents aren’t worth the attention.

You must have had comments regarding your involvement with reality shows and movies as well. What are your views on these experiences?
I like that working in reality shows and movies have given me the opportunity to work with as well as learn from people I wouldn’t have met while just making music. In many ways, it has helped broadened my horizon.

I just view them as another medium to express myself. It’s another form of art and it wasn’t challenging to be a part of them. I found it to be quite comfortable actually.

As some might have guessed, in my personal time, I listen to other genres a lot more than hip-hop. I don’t download hip-hop songs on my phone, I just check them out on YouTube.

And where drives are concerned, I think Bipul Chettri is the best. His songs aren’t only melodious but also wholesome meaning I can enjoy it together with my grandparents, parents, nephews or nieces. It’s perfect for long drives. My favorite is Ram Sailee.

I have one ASAP Rocky tune in my playlist: Wild for the night, but I absolutely love it. Here he has collaborated with the powerhouse dub step producer and DJ Skrillex and the single has really been crafted for clubs. It’s really catchy and I like how he mixed up the genres as well. It’s an ideal example of a hip-hop and EDM mix.

The future of music: Eminem

He is, of course, one of my all-time favorite rappers. I find his work to be very motivational but of late, he has been getting some flak for his new sound. Many people say they prefer the old Eminem but I think his new releases are way too early for this time. It is very futuristic, thus many haven’t understood it yet. With time I think people will appreciate it more. Eminem will rule the rooster again.

We get along really well, but besides that I admire Sabin Rai for his work as well. It’s also not only his distinct singing style, but also the lyrics that captivate me. He has a way of articulating his emotions and I find myself drawn to his words. I like ending as well as starting my days with soft tunes, thus I listen to him often.

I haven’t met Yogeshwor Amatya in person, but I’m a big fan. I love watching his performances and also immensely enjoy his interviews. But in contrast to his energetic personality, I find his songs to be just the tune to help me chill. It’s just got that kind of vibe. I often listen to his songs when I’m going to sleep.

Harry Potter invisibility cloaks are a step closer to reality

It may seem like pure fantasy, but a Harry Potter-style invisibility cloak is now a step closer to reality. ... Read More...