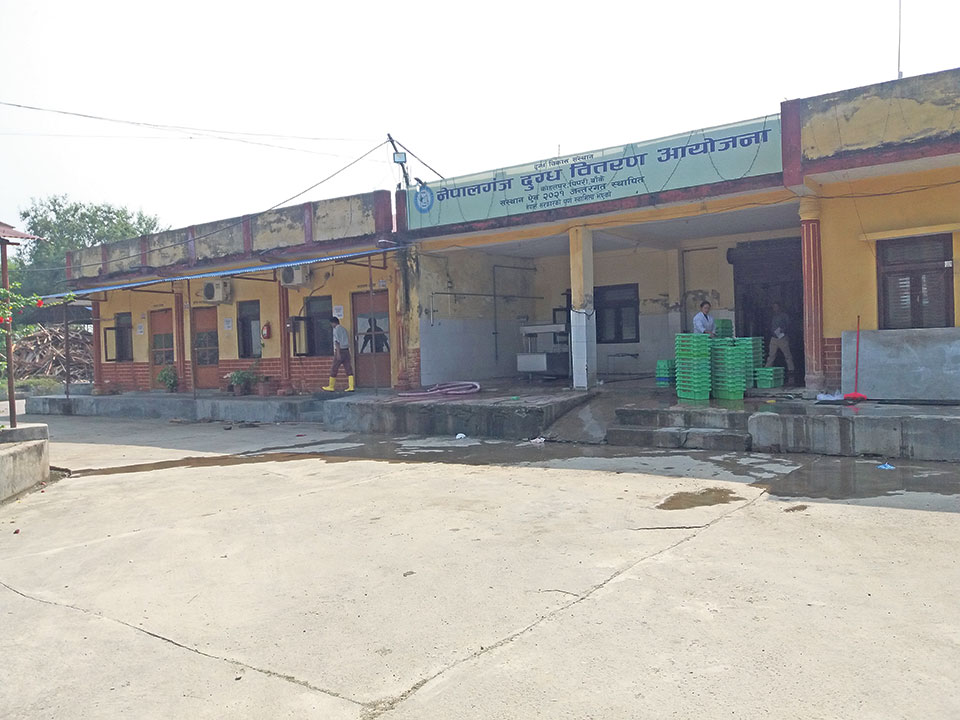 KOHALPUR, Oct 31: The storage capacity for milk in Nepalgunj is insufficient to receive all milk produced in the far-western and mid-western regions, officials of Nepalgunj Milk Distribution Project, which is under Dairy Development Board, have said.

Delays in milk supply from the chilling centers to the storage as well as supply of milk from the storage to the consumers are affected.

This means a slow consumption and degradation of the quality of fresh milk and discouragement of milk producing farmers. The storage facility can only accommodate 15,000 liters and its capacity is utilized every two days.

“The current level of milk supply requires a storage facility of 25,000 liters to accommodate all the milk produced in the region,” said Gopal Dahal, chief of the project.

Dahal further explained: “The milk storage capacity is filled in just two days and we can send only 5,500 liters per day. The remaining milk goes for freezing and the reason is lack of needful tankers to supply for consumption.”

The collection center supplies 5,600 liters of milk daily for consumption in Banke district, while the remaining 4,100 liters are transported to Kathmandu and Pokhara.

“The infrastructure of additional storage tank of 15,000 liters and a tanker of 9,000 liter capacity can solve the current problem,” said Niranjan Bhattarai, section officer of the project.

Bhattarai feared that the additional milk supplied may go wasted if the two demands are not met immediately.

The project officials also informed that some of the milk produced by the farmers was not sold, but they did not specify the unsold volume.

The officials have also said that the storage issue has prevented them from initiating any program targeted toward the farmers and collecting milk from local levels.

The collection center collects milk from the collection depots based in Kailali, Surkhet, Dang and Bardia every day.

NUWAKOT, June 5: The process of constructing a fuel storage facility in Nuwakot has kicked off. Land has already been determined... Read More...

KATHMANDU, May 2: The Raxaul-Amlekhgunj Petroleum Pipeline Project has hit a snag because of the delay in getting clearance from the... Read More...