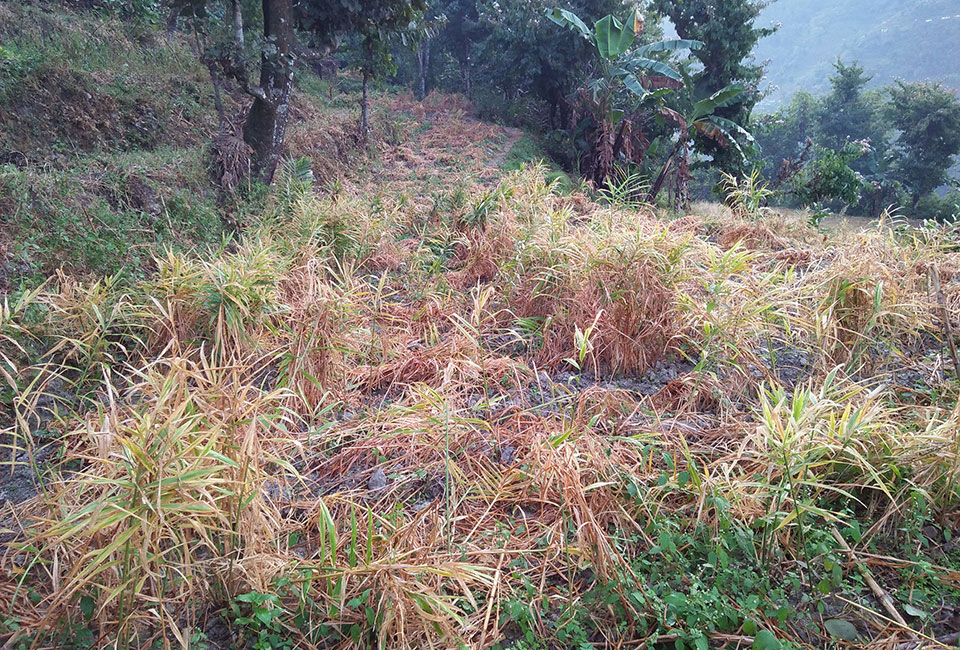 TAPLEJUNG, Dec 2: Farmers in Taplejung have been worried after not getting suitable market price for ginger. Despite high season of ginger, they are not getting good price in the market.

They are finding hard to sell 40 kilograms of ginger at Rs 1,000 this year. Farmers had not got good market price for ginger last year also.

According to Durga Tamling from Sidingba Rural Municipality, small ginger in Jhapa hardly got Rs 1,000 for 40 kilograms, while the big ginger got only Rs 700 for 40 kilograms.  Failing to get proper price, farmers have left ginger in the fields, Tamling said. Last year farmers had sold their ginger at Rs 15 to Rs 18 per kg.

Sanjay Limbu from former Sablakhu VDC used to earn Rs 100,000 to Rs 150,000 every year by selling ginger, but since last year his income has been declining.

He said that in previous years, he used to sell ginger at Rs 80 to Rs 120 that has now declined to Rs 17 this year.

Most of the farmers of the district are into commercial ginger farming as it gives three-times more profit than food crops.

Ginger used to give them higher profit than maize, millet, rice and other food crops. Ginger farming has been established as a cash crop in the district and it has brought positive changes in the farmers’ livelihood.

As the ginger produced in the district is supplied to India, it has been facing difficulties due to blockade and low market price in recent years. According to District Agriculture Development Office (DADO) Taplejung, ginger farming is mostly done at Fungling Municipality, Yangvarak Rural Municipality, Chaksibote, Nangkholyang, Thechambu, Sirijangghak Aambegudin, Sinam, Sidingba Sablakhu, Limbudin, Aankhop and some other villages.

According to the DADO, ginger farming has covered around 225 hectares of land in the district that produces around 3,500 tons of ginger every year.

Around 50 hectares of land is used to grow ginger seed and rest of the land is used for ginger farming, said Naresh Chandra Ghimire, senior agriculture development officer of DADO Taplejung.

DHANKUTA, Jan 14: Farmers in Dhankuta have been worried after not getting suitable market price for their ginger as it... Read More...

How safe are pubs and restaurants?
14 hours ago