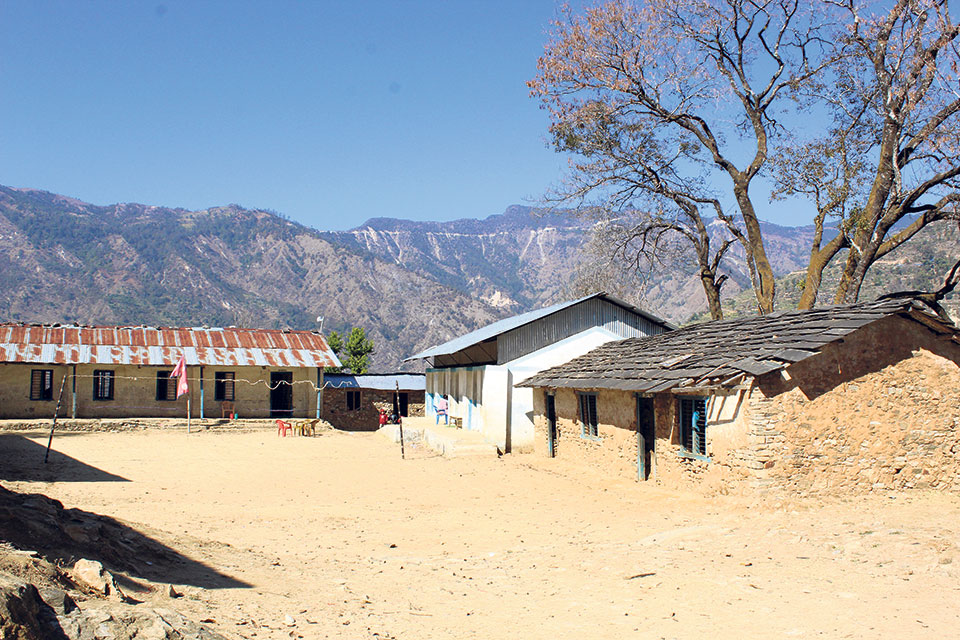 Saraswati Secondary School of Pang where the student drop out rate is high due to early marriage. Photo: Republica

ROLPA, Jan 15: Four 9th graders and five 10th graders of Saraswati Secondary School of Lungri Rural Municipality – 1 quit school last year as they got married. According to the school principal Umesh Pun, the school has a high dropout rate and early marriage is one of the main reasons.

"We are tired of this trend. It's not arranged but 'love marriage'. Girls elope and then their study comes to a halt. Boys also hardly come to school after marriage," he said. "This affects the school environment, but we have not been able to do anything about it," he added.

According to Pun, most children argue that education is good for nothing. They say at the face of teachers what they are going to do even if they pass high school. "This kind of feeling is very strong. They have no zeal or respect for education," said Pun.

Mati Pun, chairperson of Lungri Rural Municipality–1 stated that the lack of sex education has led to the sorry state. As the girls and boys are not able to handle their adolescent age, they take wrong decisions. "Many girls get pregnant while they are still at school. They have then no choice but to elope with their boyfriends. This trend is becoming common," he said. "Just some time ago, I took notice of a girl in the 9th grade. I came to know that she was six-month pregnant. This incident was widely discussed and the case even reached the police. At the district headquarters, the families settled the case with the police. The boy and the girl got married," he narrated a case.

According to him, several such cases reach police and jointly handled by the authorities and respective families. When such marriages are endorsed, this gives a positive message to other young kids.

"When police and the families allow the girl and boy to stay together in the name of marriage, other boys and girls feel encouraged," he said. "But this is not legal, we cannot issue marriage certificates or birth certificates of the children from such marriages," he added.

Early marriage has led to a number of cases of divorce, according to Pun. Many couples come to the ward requesting for separation from their partners. "But when marriage itself is not legal, there is no point of going for a divorce. But complicated cases arrive; which are mostly related to domestic violence and custody of newborns," he added.

The legal marriageable age in the country for both girls and boys is 20. However, by the age of 20 a huge number of women in Rolpa become mother of one or more babies. As per its data, 107 among 431 women to deliver babies at Rolpa District Hospital were below 20. And 14 among those underage girls had to go through complicated surgery during delivery.

Dr Anil KC of the district hospital stated that child marriage has taken a serious toll on women's health in Rolpa. Uterine prolapse among women here is not going to be a matter of tomorrow anytime soon. "Child marriage is still widely in practice. School children get married on a whim. This is very bad for women's health. They develop several kinds of complications in the long run," he said. "If our girls become mother at a very young age now, their health is going to be in a very sorry state in the long run," he added.

ROLPA, July 21: Over 80 girls below the age of 20 gave birth in Rolpa District Hospital in the last fiscal... Read More...

ROLPA, Dec 17: One hundred and sixteen students had enrolled at the Janapriya Primary School of Dhawang in Rolpa at... Read More...

CHITWAN, July 6: Chitwan has recorded 53 incidents of human rights violation in the past six months alone, a slightly... Read More...

Renu Dahal leading by more than 5,000 votes in Bharatpur metropolis
7 hours ago