Lopsang and young footballers ready for next test 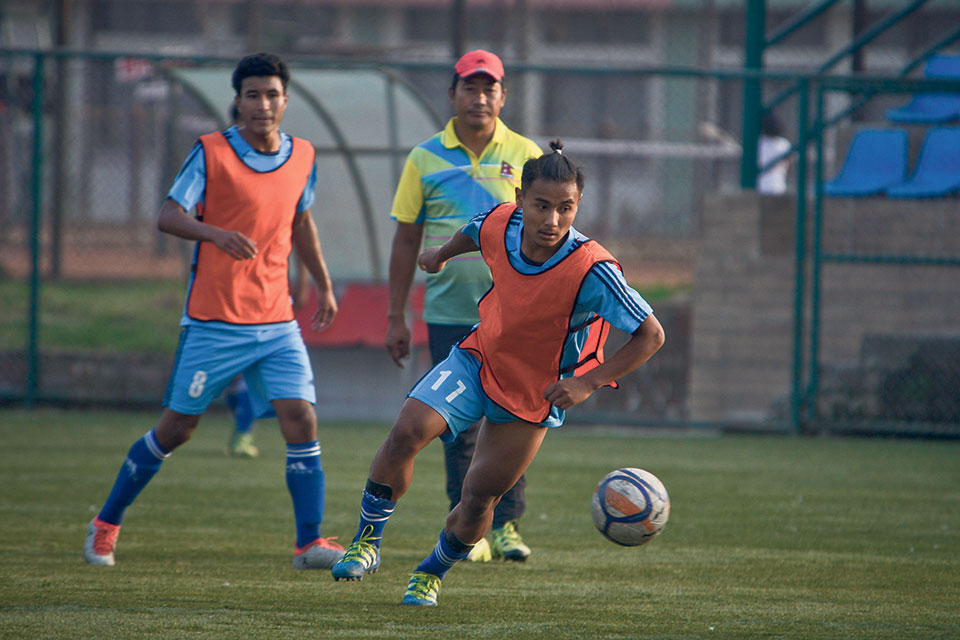 Players of Nepal U-19 football team attend a training session at the ANFA Complex in Satdobato, Lalitpur on Tuesday. (Bijay Gajmer/Republica)

Nepali U-18 team under head coach Tshering Lopsang faced first-ever defeat (1-0) to Bhutan in the country’s football history. However, Nepal managed to win the championship for the second time despite the poor start.

Nepali young team which had left for the Bhutanese capital Thimpu with an aim of defending the title was expected to lose its way after facing shocking defeat to Bhutan in the first match.

But overcoming Maldives (2-0), Bangladesh (2-1) and India (2-0) in the remaining matches of the competition that were played in round-robin format; Nepal lifted the title for the second time in a row. Nepal had clinched the inaugural edition of the championship, held two years earlier at home.
Now Lopsang and the young footballers are set to go through a new test as they are taking part in the AFC U-19 Championship 2018 Qualifiers to be held in Kyrgyzstan from October 31 to November 8.

Lopsang who guided the Nepali young team to the title in his first stint as the head coach of the national team said that Asian Championship Qualifiers was going to be much tougher than SAFF Championship.

“Given the level of the opponents in the Asian Championship Qualifiers, it is without doubt a top level competition. It is going to be far tougher than SAFF,” said Lopsang.

Nepal pitted in Group A of the qualifiers will compete against Bahrain, United Arab Emirates (UAE), Oman, and the host team Kyrgyzstan.

Lopsang who has guided the Nepali football giant Manang Marsyangdi Club (MMC) to several domestic titles including A Division League, said that winning SAFF had boosted the confidence of the players. But it also increased the challenge, he said.

“Since we are going to the Asian Qualifiers as the South Asian champion, the opponent will treat us accordingly,” added Lopsang: “If we hadn’t lifted the championship, maybe they would take us lightly. But now the situation is going to be different.”

Nepal will begin the qualification campaign taking on host Kyrgyzstan on October 31 and will take on Bahrain two days later. Likewise, the Nepali young team will compete against UAE on November 4 and Oman in its last match on November 8.

Lopsang said his team’s ultimate target is to qualify for the Asian Championship to be held in Indonesia next year. “Definitely the level of the opponents in our group is very high. But in age group competitions, team like us can shock stronger sides,” added Lopsang: “Two teams qualify from one group, so I think there is chance for us.”

A total of 43 Asian nations that are divided into ten groups are competing in the qualifiers and top two teams from each group will join host Indonesia in the final round.

The Nepali team is currently in the last phase of preparations at ANFA Complex in Lalitpur, Nepal. Lopsang had added five players in the 23-member squad that took part in the SAFF Championship.
Head coach Lopsang has said that the finishing of the forwards was the major part to improve in the team. “In Bhutan, we had created many scoring chances but due to poor finishing, we couldn’t score enough goals so we are working on that part,” Lopsang said.

He also informed that there would be no change in the playing system of the team, hence 4-4-2 would be in use in Kyrgyzstan as well. “I wanted to try a different system but due to short time in hand for preparation, it is not possible. So we will continue the same style that we opted in Bhutan,” he added.

The MMC head coach said he was even more determined to deliver success after winning the SAFF championship. “The SAFF championship was my first ever national duty and I succeeded in it to make my nation proud. And I want to replicate the same success this time as well,” Lopsang said.

Amendment proposal will be ready in next 4 days: DPM Nidhi

100 Days: Tokyo Olympics marked by footnotes and asterisks
15 hours ago
Biden set to withdraw U.S. troops from Afghanistan by Sept. 11
16 hours ago