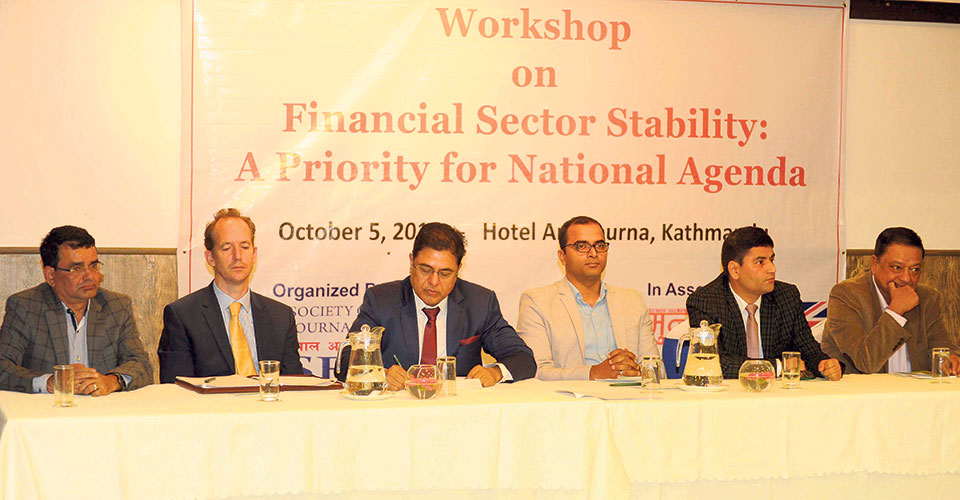 KATHMANDU, Oct 6: Nepal Rastra Bank (NRB) Governor Chiranjibi Nepal has warned that the loosely-regulated cooperatives that mobilize deposits are the biggest threats to the financial sector stability of the country.

Addressing the inaugural session of a talk program on ‘Financial Sector Stability: A Priority for National Agenda’ organized by the Society of Economic Journalists-Nepal (SEJON) in the capital on Friday, NRB Governor Nepal said that the saving and deposit cooperatives as well as non-banking financial institutions have posed unseen risks to the financial sector stability of the country, according to a statement issued by SEJON.

He added that the monetary policy for the current Fiscal Year 2018/19 has introduced several measures to strengthen financial stability.

On the occasion, financial experts, policy makers and regulators said that financial stability was a pre-requisite for economic growth and should not be taken as granted.

“Regulatory system of the banking sector is very strong. The central bank is strong and capable to control banks and financial institutions,” Governor Nepal was quoted as saying.

As more than 15 percent of money is mobilized by these institutions that are out of the regulatory system, he said that any shock from them could pose threat to the entire financial system of the country.

Also speaking on the occasion, Bimal Koirala, political economy advisor at UKAid-funded Financial Sector Stability Program, underscored the need to strengthen regulatory and supervisory capacities of the regulatory bodies to maintain financial stability of the country.

Nara Bahadur Thapa, research department chief of the NRB, said that the state-owned Rastriya Banijya Bank and Nepal Bank Ltd had threatened the financial sector stability of the country in the past. Stating that the government had to bail out these banks through Rs 3.5 billion of the taxpayers’ money, he said that the crisis has also led to several reform initiatives in the financial sector.

Strahan Spencer, senior economic adviser at DFID Nepal, said that firms and households are vulnerable to economic or financial shocks. “One of the important lessons from the global financial crisis of 2008 is that we should not take financial stability as granted,” he said, warning that sophisticated financial products could pose risk to the financial sector.

KATHMANDU, July 11: The average capacity utilization of Nepali factories has reached 60% over the first six months of the... Read More...

KATHMANDU, Sept 21: Reconstruction of a Nepal Rastra Bank's building damaged in the earthquake of April 2015 has started as... Read More...