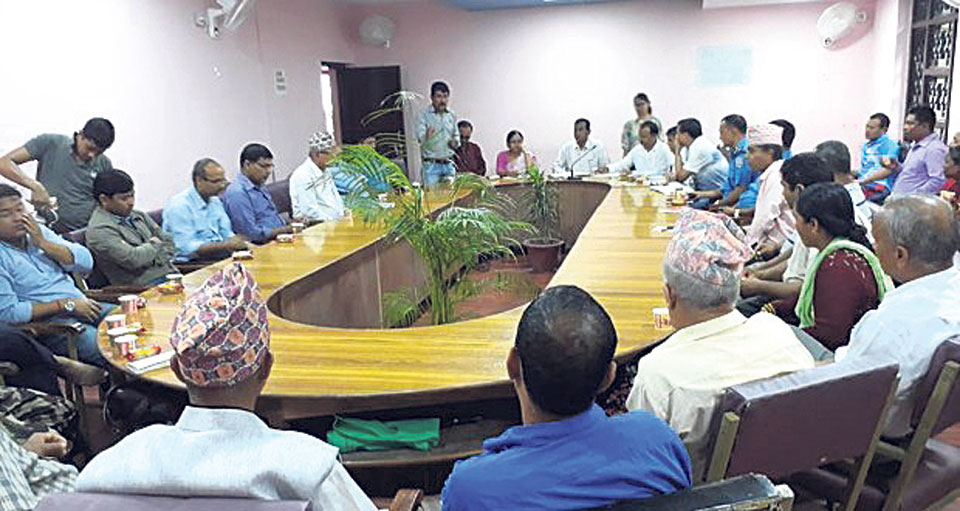 Representatives of various local bodies from across the district participate in a joint discussion in Ghorahi, Dang in this recent picture.

DANG, August 5: It has been more than a month since the local representatives were elected. But unfortunately they have not made any visible progress so far and this has disappointed the locals. So far the representatives have not implemented any of their plans though they had made numerous promises before the elections. Those who had actively taken part in the elections with the hope of seeing new changes in the village have started questioning the representatives about their accomplishments.

Representatives say that they are still uncertain on ways to implement their promised projects. "We have spent so many days but we have not been able to implement any of our promised plans," said Bhakta bahadur Oli, Chairperson of Banglachuli Rural Municipality, adding, “we are still struggling to find out a way to begin the work." As per the locals, if not major projects the representatives should at least have done repairing and reconstructing existing infrastructures. “We don't want them to change everything within months but they should have at least begun some projects by now," said Niraj Giri, a local of Ghorahi.

During the elections, candidates had made various promises however they are finding it hard to fulfill them now. “Disappointment of people towards us has worried us too but they should understand that we are busy in formulating plans to implement the promised projects," said Sabitra BK, vice chairperson of Babai Rural Municipality. These days, locals are repeatedly questioning them about their promises and achievements which often leave them speechless. Due to the fear of losing the trust of people Babai Rural Municipality recently introduced a plan to fill the potholes and mud holes in the road. "If we became able to fill up the potholes of the roads people will at least travel safely," said BK.

Kaman Singh Dangi, chairperson of Shantinagar Rural Municipality had promised to develop his village as a model village but he is still undecided on ways to do it. "I don't get time to stay in office as there are regular invitations from NGOs and INGOs almost every single day," he said, adding “these welcome and felicitation programs are killing my time." By now, this rural municipality has been able to establish its office only.

According to Dangi, new local level restructuring is very complex to understand and that is also one of the reasons behind the delayed development projects. "We have already directed the ward offices to select and forward their development projects," said Dangi, adding "We will then evaluate the best projects and start implementing them."

During the elections, development oriented programs were the agenda of most of candidates however coming now most of their agenda are budget oriented. But still most of them are facing difficulties in preparing these types of programs as well.

Rapti Rural Municipality has announced to pay the transport expenses of new mothers while traveling from hospitals to home after receiving their baby. It has also made another decision to establish a fund in order to provide treatment to elderly citizens. As recommended by the health posts and ward office people meeting the state announced criteria to be called elderly citizens will receive Rs. 2,000 per year for their treatment. But the rural municipality is still not sure from where it will cater funds for the program.

Most of the local units are unable to implement their plans as they are still uncertain how they will manage finances for their plans. “We will at first figure out financial sources for the plans and then implement our projects and plans," said Numananda Subedi, chairperson of Rapti Rural Municipality. Subedi has urged the locals to stay calm stating that they fulfill all of their promises.

Representatives were supposed to complete all the planning work by August 15, but it seems like they will spend more time on it. As informed by Bhagi Ram Chaudhary, chairperson of Dangisharan Rural Municipality they will complete the planning work by the end of August. This rural municipality has not been able to make a single decision till now which has irked the locals.

Meanwhile, Lamahi Rural Municipality has considered the management of stray cattle's and market cleaning as its main achievement. "Creating a clean and well managed city was my main objective and I have somehow been able to do so," said Kul Bahadur KC, mayor of the municipality. On the other hand, Rajpur Rural Municipality has prioritized the health of people in border areas. As informed by Lok Raj KC, chairperson of the rural municipality few health officers have been sent to the border areas to provide health services to the people who are suffering in lack of treatment.

Similalrly, Tulsipur Municipality had prioritized the resumption of services at the Tulsipur Airport, and management of traffic along the highway, among others. "Currently we are utilizing our time in making strategies on implementing our plans," said Ghan Shyam Pandey, mayor of Tulsipur Sub-metropolitan City.

Naru Lal Chaudhary, mayor of Ghorahi Sub-Metropolitan accepted that the local unit has not been able to impress the people so far. “We have been holding discussions with various stakeholders and will soon put our plans into action," he said. The condition of roads in Ghorahi is pathetic so locals were expecting the new representatives to repair them.

JHAPA, Dec 22:  Right after their victory in the local level elections this July, local representatives vowed in a gathering in... Read More...

SURKHET, July 25: Locals of various rural municipalities of Surkhet district have been disappointed with the newly elected representatives who have... Read More...