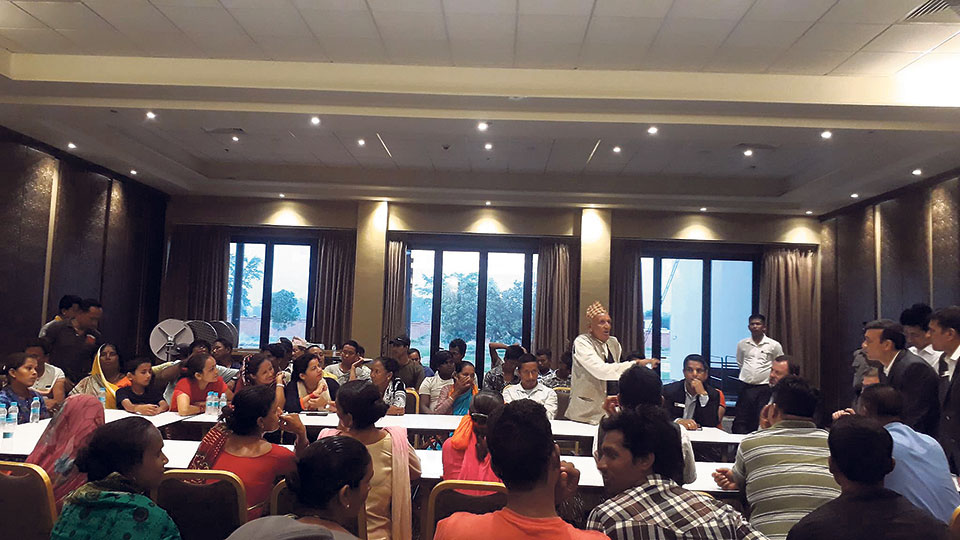 A delegation of locals during a meeting with the administration of Tiger Palace Resort at the resort at Tilottama Municipality in Rupandehi on Thursday. They have demanded the resort to make good on its past promises.

BUTWAL, May 25: Outraged by the act of Tiger Palace Resort to dump sewage and garbage into a local canal, residents of the affected Bankatti and Babani villages of Bhairahawa have asked the five-star resort to abide by the past agreement not to pollute the canal. The hotel’s failure to uphold the deal will compel them to stage protests, they have warned.

Stating that discharging harmful waste and sewage into the canal could have serious health implications for them, the locals have warned to take action if the hotel doesn’t stop the act without further delay.

“We have already told them time and again. Now if they do not stop, we’ll cut the pipes off,” warned Sukamaya BK, chairperson of Sachetana Mahila Samuha. “The hotel should also clean the canal that they polluted,” she added.

The hotel had reached various agreements with the locals before its establishment. The residents of ward no 15 and ward no 13 of Tilottama have urged the hotel to uphold the agreements.

Before its establishment, the hotel had promised to establish a modern library in Babani village and build a 24-feet wide blacktopped road network and other public structures.

Likewise, the management of the hotel had also agreed to build concrete walls on both sides of the canal which flows through the village and provide employment to the locals.  However, the hotel has ignored the agreement after coming into operation, according to Manoj Chhetri of Babani.

“The construction of the library was abruptly abandoned. They have also not constructed the road and canal as promised,” said Chhetri, “Instead, by discharging their sewage directly into the public canal, they are committing a serious crime.”

Likewise, the hotel, which was constructed with an investment of over Rs 5 billion, has also encroached upon around 15 kattha of public land of the canal.

The outraged locals on Wednesday conveyed their demands to the hotel’s general manager, who promised them to take up the matter with the promoters of the hotel.

KATHMANDU, June 15: Non-governmental Organizations (NGOs) have urged the government to withdraw its decision to seek the property details of non-governmental... Read More...

KATHMANDU, Jan 16: The Nursing Association of Nepal (NAN), the umbrella organization of nurses across the country, has threatened of a... Read More...

Kalanki locals hope air pollution will be tamed after polls

KATHMANDU, Dec 3: The appalling air pollution and the ailing health of locals in Kalanki have time and again made headlines... Read More...