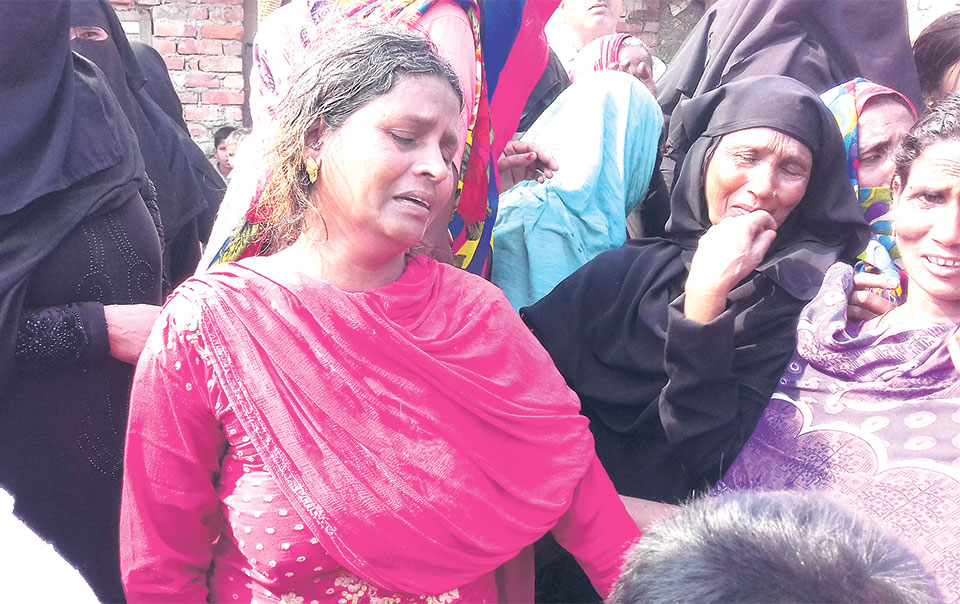 KAPILVASTU, Feb 19: The five-year-old son of Fatteh Mohammad Musalman, the chairperson of Mayadevi Rural Municipality-4 of Kapilvastu was found dead in a pond nearby his home on Sunday afternoon. Musalman's son was abducted on Thursday by two unidentified persons while he was heading to his school.  Neighbors of the ward chief had recovered the body at around 12 pm on Sunday.

The family members of the deceased have accused the police of neglecting their case by not making efforts to find out the culprits.

Though the family members have claimed that the minor was murdered, police are yet to confirm it. According to police, there are no injuries in the body of the little boy except for a blue mark on his neck. "Despite being informed about the incident, police have not yet started investigation," said ward chief Musalman.

As per the eyewitnesses, two persons in motorcycle had taken the ward chief's son Aman toward India at around 8 am. The border is just 700 meters away from the incident site. Ward chief Musalman has accused a lawmaker of Province 5, Faujiya Nasim, and her husband Nasim Khan, Abu Bafar, Mohammad Ahiya among others for abducting and killing his son.

"I have clearly named the perpetrators but police have not done anything yet," said ward chief Musalman.
According to DSP Narendra Karki, the victim's family has yet not filed a written complaint.

"We tried our best but could not save the child," said Karki, adding, "We are making efforts to find out the culprits."

As per the locals, ward chief Musalman had a dispute with Nasim Khan, who has been on the run from the time he was elected as ward chief. Earlier, the budget of the VDC used to be mobilized as per the directives of Nasim but after the local elections, he lost that right to Musalman. This had created differences between them.

Nasim, who has been charged with various crimes, has been living in India since a long time. Talking to journalist on phone, he claimed that he has no involvement in this incident.  "This is a plot to assassinate my character and harm the prestige of me and my lawmaker wife Faujiya," he said.

The abduction and murder of the child has terrorized the whole village. Locals have appealed for proper investigation and stern punishment against the criminals. The body of the child has been taken to District Hospital of Taulihawa for postmortem.

DADELDHURA, May 29: Four passengers were killed and seven others sustained injuries when a jeep heading toward Dhangadhi from Dipayal plunged... Read More...