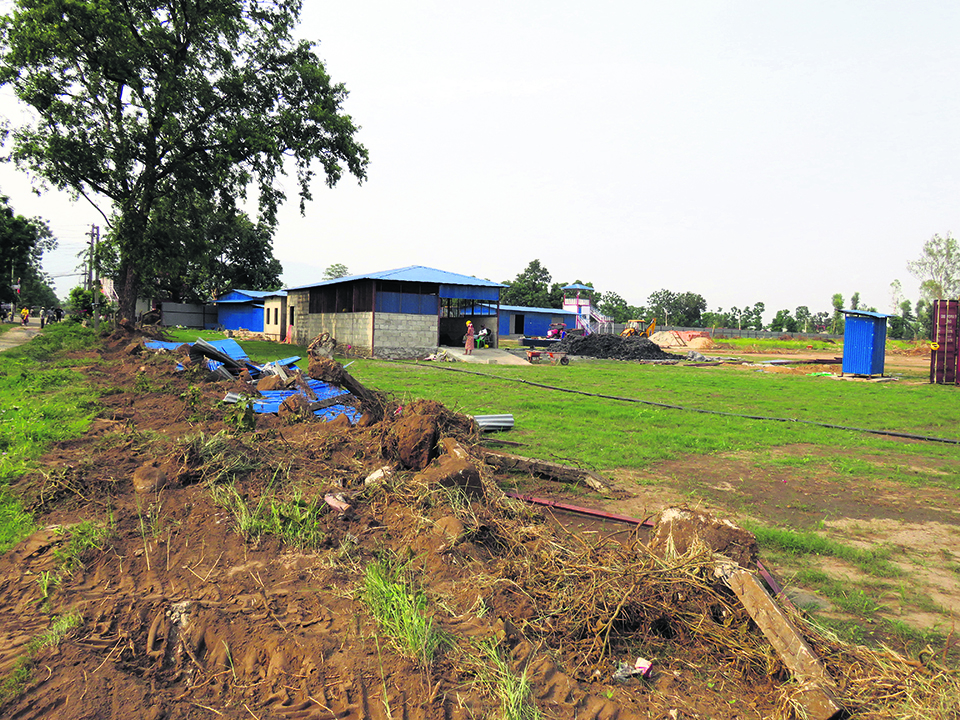 CHITWAN, May 30: Locals have destroyed the fencing of the under-construction Gautam Buddha International Cricket Stadium in Bharatpur Metropolitan City Ward 15 on Wednesday.

A group that reached the stadium with an excavator destroyed the temporary fencing on the western part of the stadium. The group also damaged the land of Agriculture and Forest University, which is adjacent to the stadium, by driving the excavator for about one kilometer on the land.

Employers working in the stadium had clicked pictures of the destroyed part of the stadium. The university had earlier barred the side of the stadium before it was announced to be constructed.

The Dhurmus Suntali Foundation had placed a metal pipe around the part of the stadium which covers an area of 20 bigha and six kattha. President of the foundation, Sitaram Kattel, said that even though they had covered three sides, the western part of the stadium had old fencing.

Kattel said that the foundation had discussed with the locals time and again to bar the western side by corrugated sheet as the permanent fencing was delayed, and they wanted protection of the construction site, material, and machines.

It was only on Tuesday when they had started to cover the western side by corrugated sheet, replacing the old fencing.

“We had already discussed with the locals to leave certain part of the ground, after the digital project report was finalized,” Katel said, “This type of incident makes us sad, just like the welcome of the people gives you happiness. Such incident demoralizes you when you are making every effort to see it happen.”

“How can we say how much land we can leave to expand the road,” he further questioned, adding: “They did this after I told them we will have discussions about this even after the DPR of the first stadium was prepared.”

He blamed the NCP local leader Prakash Kadel along with the house owner where the foundation’s office is located. The District Police Office has already arrested 16 people involved in the incident. Deputy Superintendent of Police Durga Raj Regmi said that 10 among the ones arrested are men and the remaining women. He said that further investigation is going on.

Kattel informed that a total of Rs 65 million has been provided by different individuals and organizations for the construction of the stadium so far. The foundation has been organizing fund raising events for the purpose at home and abroad.