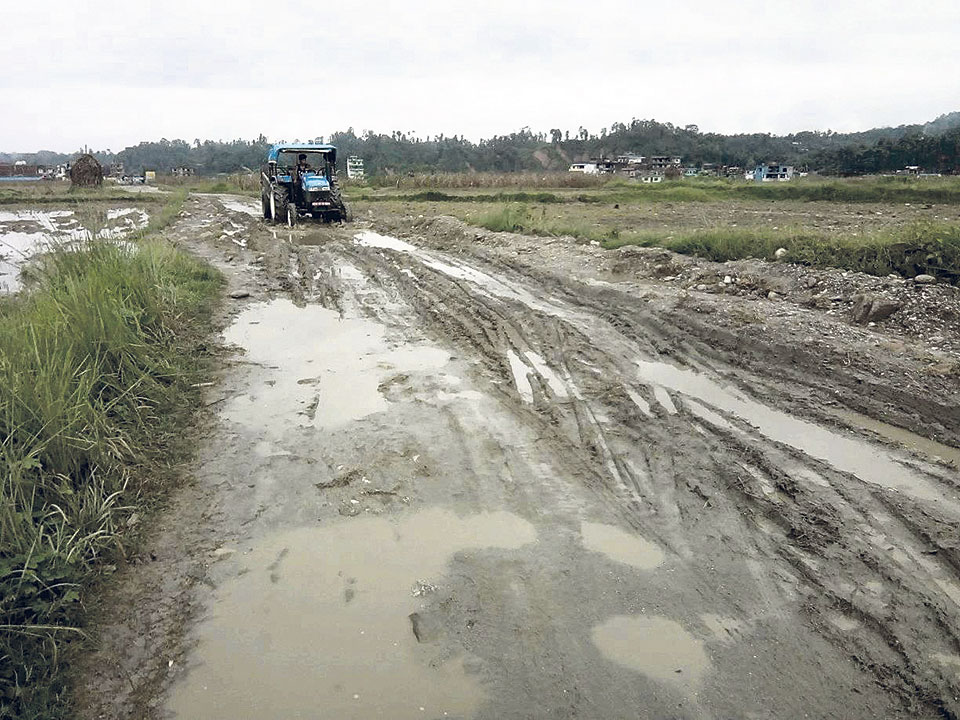 A road in Kamalamai Municipality -6 in this recent photo. Almost all the roads in the district are in the same condition since the arrival of monsoon. Photo: Anil Bhandari/Republica

SINDHULI, July 4: Nawaraj Gole of Kamalai Municipality in Sindhuli district does not like to step out of his home these days. Due to excessive rainfall, all the roads resemble ‘paddy fields’.

“I have stopped riding motorbike. Even other vehicles are not available as the roads are slippery,” he lamented.

It has been raining in Sindhuli since the last three days. This has changed the face of all the roads, basically in the rural areas where the roads were not blacktopped. According to the locals, their everyday work has come to a halt and life has become extremely difficult.

“When it rains for a few days, life comes to a standstill. It is all due to poor road condition. We never care for quality while constructing road. The contractors are neither questioned, nor monitored and ultimately we are bound to suffer like this,” Gole said.

According to Gole, a lot of new tracks were opened in the last few decades. Most of the tracks were made in a haphazard manner, ‘as per the need of politicians’.

“Rather than where it was necessary and feasible, they were opening new tracks just to grab new contract. Then, there was neither any quality nor any environmental testing,” reported Gole.

Now, such roads have even posed risk of landslides to the settlements around. Locals state that the cliffs were blasted to make roads without any scientific study and measurement. This has made their settlement vulnerable.

“When roads were opened, people were initially happy. But over the years, they have realized that haphazard development does not come without risks. Many of our settlements are now under risk of landslides,” Gole said.

Hundreds of passengers have been stranded due to bad weather and dilapidated roads in the rural areas as well as in the district headquarters.

“Some roads destroyed by the earthquake have not yet been properly repaired. And now, you see, new roads are there, but just for sake of name. Even little rain can disturb everything,” noted Ram Kaji Waiba, chairperson of Ghyakhel Rural Municipality-1.

“We have been isolated. We have no access to Kathmandu or elsewhere since the last few days,” he said sarcastically. “You can easily plant paddy in those roads. These are not roads actually,” he added.

Waiba also attributes the poor condition of roads to haphazard planning. Since the roads were opened without proper study and engineering, these have become a huge source of trouble to the people, he noted.

“We are people’s representatives. They pin hope on us. But things are messy, it is not going to come to track anytime soon,” he stated.

Meanwhile, a local of Majhuwa village, Ganesh Bhandari said that the government must address the road issue right away.

Since the roads were constructed without proper study from technical experts, they have now turned into death traps, he fumed.

“Due to poor road, people are not just forced to stay inside home, but those who have attempted to travel have died or met with accidents. The government must be held responsible for this,” Bhandari said. “In the name of development, destruction has come here,” he added.

He further stated that locals have already conveyed the message to the local bodies. If the local representatives do not pay heed to the plea, locals will take the matter to the streets, he warned.

“Dozens of villages are under the risk of landslides. Passengers have been stranded for days. And the government, which collects tax from us does nothing about it,” said Bhandari. “We will have to take the matter either to the higher level or take to the streets,” he added.

Following the devastating earthquake of 2015, engineers and experts had recommended relocation of dozens of settlements. However, none of the settlements have been relocated.

According to Bhandari, even the settlements where lands are seen full of huge cracks are left ignored.

“People cannot leave their ancestral land easily. They need some option,” he said. “Despite knowing that it is not safe to live here, people have continued to live here. The lands are all full of cracks. Should not the government relocate people when even experts have warned of disaster?” he questioned, adding, “Now, the monsoon has already started and we are extremely vulnerable.”

DHADING, July 31: Scorching heat in a while and torrential rain the next moment. And amid this, there are eroded... Read More...

Locals in trouble after vehicles in rural roads discontinue operations