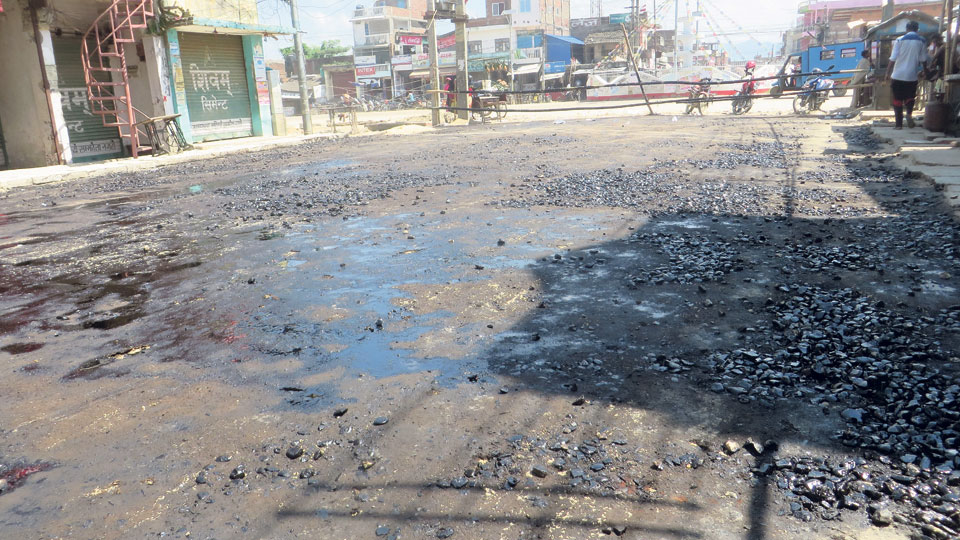 A section of the Golpark road in Siraha. Blacktopping of the road was halted by locals stating that it's base was not ready for blacktopped. Photo: Mithilesh Yadav/Republica

SIRAHA, July 19: Poor road construction and blacktopping are rampant across the country. The blacktopped layer giving in within few days is a common scene in towns and villages. Concerned authorities do not seem to care or do anything to stop the contractors from delivering such poor roads. However, in a rare incident, locals of Golbazar of Siraha district have brought an ongoing road blacktopping to a halt citing its poor construction quality.

Acting chief of technical department of the District Coordination Office Pashupati Sah and site in-charge sub engineer Dinesh Yadav inspected the road on Tuesday and handed down directives to contractor to immediately follow the blacktopping standards.

“The blacktopping of the road indeed was not meeting the government standards. We checked it and told the contractor to rework on that,” said Yadav. He added that blacktopping was done at some places without even properly cleaning the track and placing necessary construction ingredients that ensure the longevity and strength of the pitch. “When blacktopping is done without following strict guidelines, blacktopping can given in to heavy loads very easily within days of finishing it. For proper blacktopping of a road, quality of the construction materials, timing and the process has to be accurate,” he stated.

Sanjeev Nirman Sewa has been carrying out the road construction at Golbazar. The district coordinating committee has signed a contract with the company for the blacktopping of 252 meter long road from Golpark to the western side at Rs 4.2 million. As per the deal, the contractor is supposed to construct a 20 mm thick blacktopping on the road.

“The contractor is supposed to make the blacktopping 20 mm thick, but you can see without using a scale that it is not even close to it. Apart from that, materials used in blacktopping are of very poor quality. They are not mixed in appropriate proportions. As such the blacktopping is sure to give in within a few days,” stated a local of Golbazar, Shambhu Sah. “If we had not intervened, he would have finished the work by now and would have been in the process of receiving the payment from the government,” he added.

Shambhu stated that he is not a technician but has seen many roads blacktopped and that his observation of the road was not similar to that he has seen elsewhere. “I have seen that layer of mud and gravel stones mixture is first laid down, than it is soaked with water and flattened by a dozer, over and over, until the mud and stone make a strong bond. After this is done, finally the blacktopping is laid on top of the stone-mud base,” he said adding that the contractor did not follow this process and had started blacktopping the road without making the base layer strong.

Despite their protests and concerned authorities directives to blacktop the road as per government standards, the contractor unsuccessfully tried to resume on Monday, Sambhu said.

“Even after we complained the matter to the authority and brought the work to a halt, the contractor tried to push through on Monday. He was trying to hoodwink us telling things that we could not understand. But we realized that he was just trying to cheat us, so we stopped the workers and called on the authorities to intervene,” he said.

Locals said that the contractor was working recklessly on blacktopping the road and would have delivered a weak road to them if they had not interfered on time. “He had not mixed the bitumen with kerosene properly. And he was using roller over the road even before placing the mixture there. He was doing whatever he liked. It was all very weird,” Shambhu said. “And when he used the roller, all the blacktopping was actually sticking on the wheels. It was not hard for us to see that he was just trying to swindle the project funds without working,” he added.

He, however, pointed that the road quality may not yet be of the expected standard because vehicles were still plying over it. “When a road is readied for blacktopping, it’s best not to allow it to be used. But this could not be done here. So, the road quality might not be as expected,” he said.

Sambhu said that they are going to get a better road because of their own initiatives and called on people across the country to speak for themselves instead of expecting others to do it. “This must be done elsewhere as well. Until and unless public itself takes interest in development works going on in their locality, contractors and concerned authorities wont deliver them what they expect,” he commented.

DADELDHURA, June 6: Locals of Amargadhi Municipality in Dadeldhura district on Wednesday staged a protest against the municipality for dumping waste... Read More...