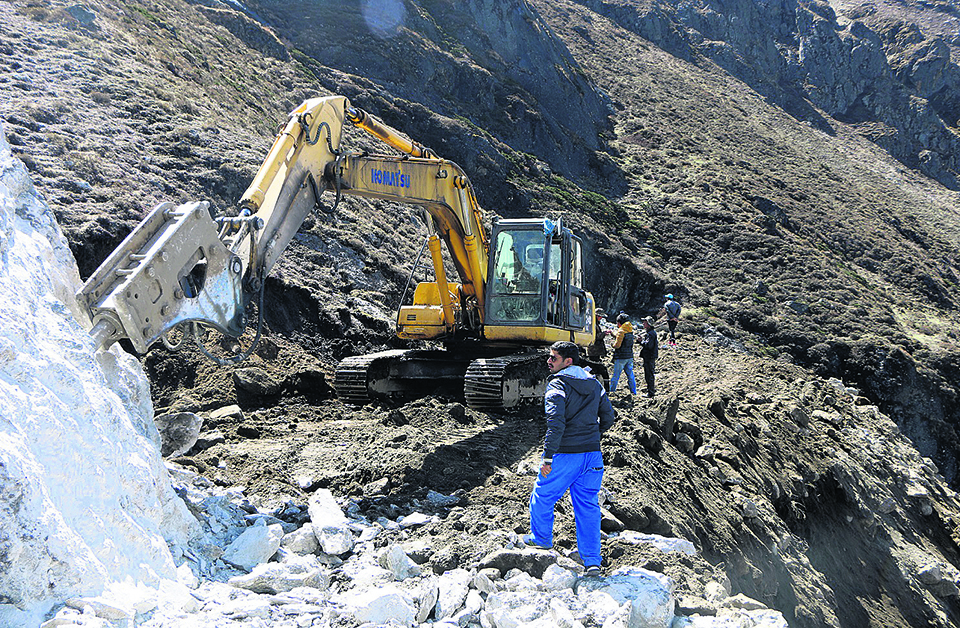 TAPLEJUNG, May 7: To the delight of the locals, two major road projects in the east have now made it to the list of ‘national pride projects’. The federal government recently recognized Dobhan – Suketar – Olangchung Gola Road’ and ‘Tamor Corridor Project’ as national pride projects. The locals believe this decision will expedite the construction of the roads.

“When the federal government considers it as national pride project, there is a reason to be hopeful. Now, there won’t be budget crunch or any other problem,” said Chheten Walung, a local of Taplegjung. “Or else, many projects are left midway citing different reasons.”

According to Ram Bahadur Gurung, an engineer of the Dobhan – Suketar – Olangchung Gola Project, the government releases budget on the basis of work progress for national pride projects. “So, there won’t be crunch of budget.”

He stated that both the roads are of very high importance. The roads can play a vital role in the overall development of the region.

In the current fiscal year, the projects had come under the provincial government. In the first week of February, the cabinet decided to bring it under the federal government. Federal lawmaker Yogesh Kumar Bhattarai, who was elected from here, is credited for prioritizing the projects.

According to Gurung, the projects could not progress much in the last six months due to the ‘tug-of-war’ between the provincial and the federal governments. “But now, it will go smoothly.”

Gurung informed that 10 concrete bridges are to be built under those projects. While some of the bridges are already under construction, some others are yet to be built. “In the coming fiscal year, the other bridges will also be built,” Gurung said. “We have done all homework for that.”

Gurung informed that at least 12 kilometers of the Dobhan – Suketar – Olangchung Gola Road section will be constructed in the coming fiscal year. Due to harsh topography here, it is not easy to open track, he said.

“There are many places where we have to blast rocks. So, even if we work speedily, it might take a year to open around 12 kilometers. We are determined to open as much track as possible next year,” Gurung said.

So far, the track has been opened up to Tasi village. Although people were happy about the opening of the track, they have however shown environmental concerns.

“In some areas, villages have been affected due to the opening of the track. We have to make sure human settlements are least affected while working for the roads,” Gurung said.
Also according to Rajiv Parajuli, an engineer of the Construction Company, care has been taken not to disturb human settlements.

“Blasting does affect to some extent. Sometimes, the soil goes loose and the settlements become vulnerable to landslides,” he said.

According to Gurung, in the view of the rough topography, support from the Chinese government for equipment and technology could be helpful. “And homework is going on to seek that kind of support,” he said.

Meanwhile, Walung, who has a good connection with the locals in the border area stated that the locals of Riu market in Tibet would certainly help. The road connectivity brings people closer, it is beneficial for both the sides, he noted.

“The government also looks serious about the roads. We are very happy, too. Since this road reaches up to the border, it is of very great importance to the people in this region,” he said. “There are many villages here which have remained isolated due to the lack of transportation service. Once these projects get completed, they will finally get access to the road network. Lives will change for good.”

Meanwhile, Gurung said that maximum work of both the projects would be completed in the coming fiscal year. “We have set the deadline of one year for completion of all the bridges. Once those bridges are built, much of our work will be done. And for the remaining part of the projects, a lot of work would be done this year itself,” he said.

He further stated that bilateral talks with China at the government level are ongoing for soliciting support for the roads.

“There are a few obstructions at some places. Infrastructure of some micro hydro projects needs to be removed. We are also working on to settle that issue,” he said.

RUKUM, July 16: Some years back Rukum residents used to get excited with the construction of roads in their surrounding.... Read More...

NEPALGUNJ, July 15: The recently blacktopped road section of Nepalgunj- Khajura has started peeling off within a month of construction. ... Read More...