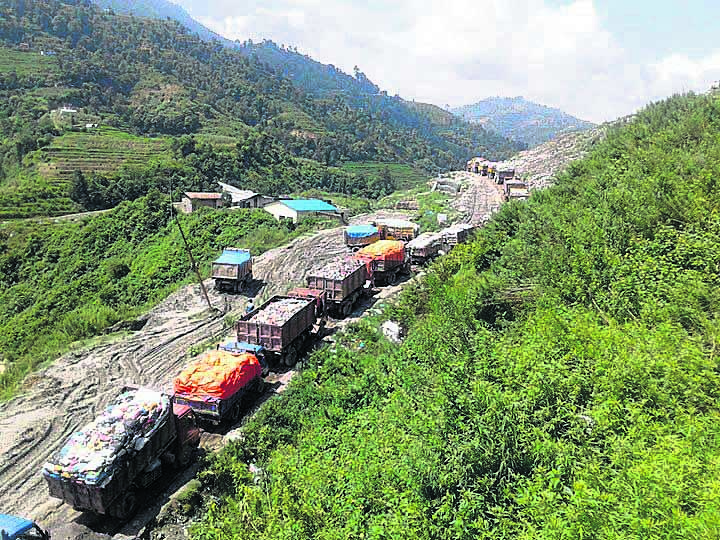 Garbage trucks lined up on the road near the Sisdole landfill site on Thursday. Photo: Republica

KAKANI (Nuwakot), Aug 17: It has been three days since Ram Bahadur Tamang, 48, a garbage truck driver for the Kathmandu Metropolis has been waiting for his truck’s turn to dump waste at the Sisdole landfill site. It is not the longest of wait he has faced to dispose the garbage at the landfill site.

“It is normal to wait for up to four days to dump the waste,” he said in a sleepy tone.

Like many other drivers of garbage trucks in the queue to dispose the waste, Ram Bahadur has been sleeping in the truck at night for the last three nights. There is no lodging facility in the vicinity of the landfill site rendering the drivers out of option. So, they sleep inside their trucks at night at the peak of the mosquito season. They bring with them mattresses to sleep on at night and enough water to last for days since there is hardly any safe drinking water source near the landfill site.

The villagers, on the other hand, are agitated by the foul smell that infiltrated their houses after the garbage trucks filled to rim with solid waste from 18 cities are lined up in front of their houses. The drivers complained that at times, the frustrated villagers throw stones at the trucks which often results in the shattering of the trucks’ glasses.

However, the villagers too have been affected by the negligence from the authorities concerned in the management of the landfill site. Dil Maya Lama, 52, had 20 goats when she bought the herd. Eleven of them died due to health problems triggered by the polluted environment. Now she only has nine. Before the establishment of the temporary landfill site at Sisdole, she used to rear buffaloes too but bot now. She said that it is difficult to rear any other bigger livestock in the area as the bigger livestock like buffaloes or cows tend to end up eating the garbage which kills them.

Most of the locals of Sisdole share a similar plight. Although they were promised of compensations by the Kathmandu Metropolitan City (KMC), they have been receiving a very small portion of the promised amount. Dil Maya said, “What I have received till date is about Rs 30,000 which is very less compensation keeping in mind that I have lost my income source due to the establishment of the landfill site.”

The management of the temporary landfill site at Sisdole and construction of a new long-term solution to the garbage management crisis in the Kathmandu Valley has become a pressing issue after it was found that the landfill site in Sisdole can only accommodate more waste for about five more months. KMC officials blamed the Solid Waste Management Technical Support Center (SWMTSC) for not building a permanent dumping site at Banchare Dada in the 12 years period in which Sisdole was being used as a temporary landfill site.

“SWMTSC was given the responsibility of constructing a dumping site at Banchare dada 12 years ago,” head of the Environment Division of KMC, Hari Bahadur Kunwar said, “The situation we are facing is the result of them not being able to construct the site as of yet.”

KMC’s Environment Division Co-coordinator Bikash Dangol said that the government should provide more support to the metropolis if they want an immediate solution. “It is not the sole responsibility of KMC to address the garbage crisis since other cities too dump their waste at the site. All three levels of the governments should work hand in hand to resolve the garbage crisis,” Dangol said.

KATHMANDU, Jan 21: The government has banned travel of Nepali nationals to Gulf countries and Malaysia on visit visa. According... Read More...

KATHMANDU, Jan 21: The government has started a process to incorporate family members of Nepali migrant workers into their health... Read More...