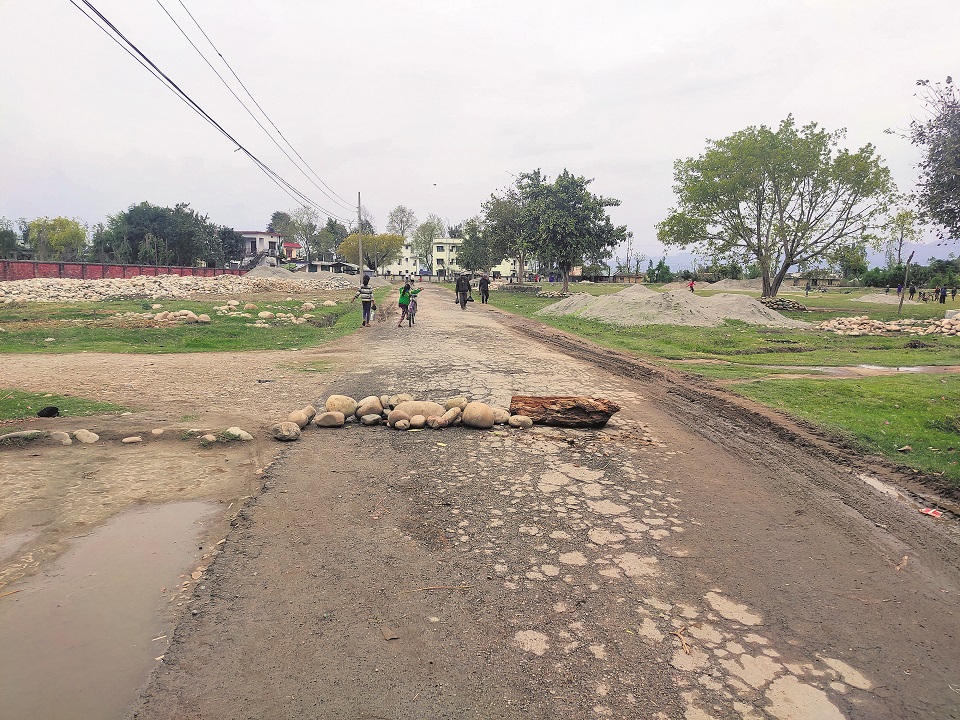 The damaged road stretch in Rajipur where locals are protesting against tipper trucks.

TIKAPUR, March 10: Locals in Rajipur of Tikapur Municipality – 2 have put restriction on the movement of tipper trucks 'to prevent roads from being further damaged'. They have taken this action against the trucks carrying sand and aggregates from the Karnali River. Both old and newly blacktopped roads are in dilapidated conditions and this has been attributed to heavily loaded trucks that 'move on the roads round the clock'.

Among others, locals have raised concerns for the one and a half kilometers long road stretch from the Tikapur eye hospital to Milanchowk. Though repaired recently, this road stretch has potholes everywhere and its surface is fully damaged now.

"It has not been even six months since this road was blacktopped but the road is like a playground now," said Siddha Thakkula, a local of Rajipur. "There are over a dozen big potholes on this small stretch of the road. You can imagine what the tipper trucks have done to the roads," he added.
Damaged roads have been a huge source of trouble for people also because of dust. According to Thakkula, the situation has gone worse in the last few weeks. Dust covers the sky, he said, adding that people around the damaged roads are sure to develop chronic health problems.

The authorities blacktopped some of the roads after several years of insistence by the locals. And the results now have greatly disappointed them. Thakkula stated that the lack of  a monitoring system to know whether right weight vehicles are plying the roads has resulted in such poor conditions of the roads.

"Nobody cares about the quality or engineering of the roads. They start rolling on the roads with extra load from the very next moment of the road being blacktopped. This obviously shortens the life of the road," noted Thakkula, who is in the forefront of the crowd that has hit the street protesting against tippers for the last few days. "We are concerned also about the frequent accidents. Tipper trucks are also the main reason behind road accidents. They can't move slowly, they hit two-wheelers and pedestrians," he said.

In view of the protest, tipper trucks are now using different routes. This has caused hassles to truck drivers and other stakeholders, according to Gorakh Rawal, a tipper truck operator.

"The alternative routes are quite rough and lengthy and quite risky to use," said Rawal. "Locals have created obstruction on the main routes, we have no choice," he added.
Locals have however not welcomed tipper trucks even on the rough roads. Stating that the households alongside the roads get affected due to 'the terror of tipper trucks', they have warned the operators to take the vehicles off.

Meanwhile, Prakash Budha, chairperson of Tikapur Municipality – 2, expressed concerns over the situation. If the trucks are not allowed to carry raw materials, development process will be affected, he said. "They carry stones, aggregates, sand etc. We can't stop the supply of these materials, he said.  "However, it is also true roads are quite easily damaged by the  tipper trucks," he added.
Budha stated that the municipality is looking for a solution. Both the parties will be asked to sit together and reach some agreement, according to him.

"We will mediate between the two parties. There is no other way to finding a solution to the problem," he said.

KATHMANDU, July 22: Although the government has decided to lift the nationwide lockdown enforced earlier to contain the spread of... Read More...