Locals against changing it into CM's residence 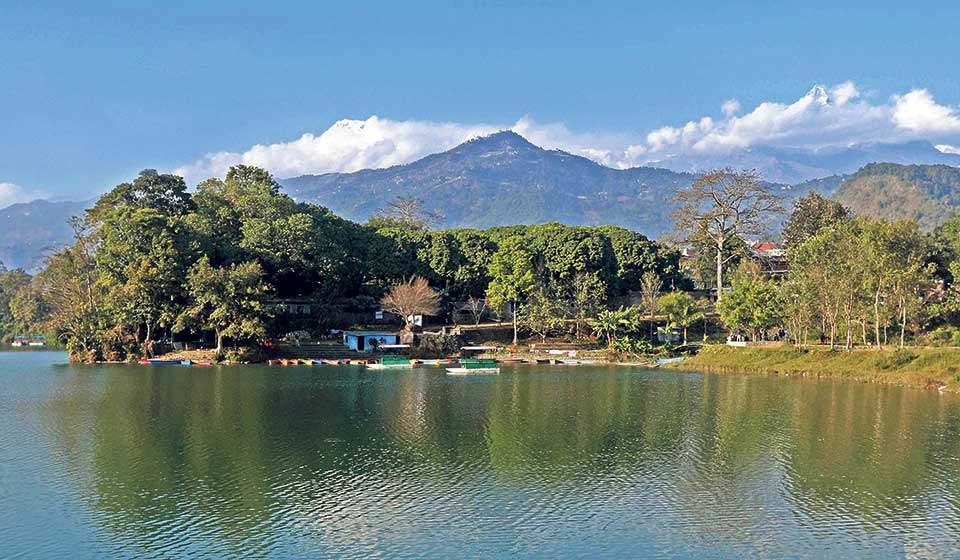 A recent photo of Himgriha that is located on the shore of Fewa lake. Photo: Santosh Pokharel

POKHARA, Dec 16: The royal family members used to come and stay here for recreation. The epitome of natural beauty 'Himgriha' and Ratna Temple in Pokhara, which stretched over 100 ropanis of land, was not open for public then.

With the abolition of monarchy and the government taking over all the properties of the then king, the assets came under control of the state in November 2010. Now, the local administration wants to use it for the residence of chief minister of the province.

However, this idea has drawn flak from locals and they are strongly against it. Stating that they would not allow one of the major natural and cultural heritages of Pokhara for CM's residential purpose, they have even warned of protest if the administration does not drop the idea. Business entrepreneurs are equally concerned. They suggest that there is no need to spoil the natural beauty, which is a huge attraction of Pokhara, for the 'new king'.

“Himgriha should not be turned into CM's residence or anyone's residence. It comes under the area of Fewa Lake and the government must think about it. It's a matter of common sense,” states Kedar Sharma, president of Pokhara Tourism Committee (PTC). He added that there are plenty of other government buildings in Pokhara which have been gathering dust and housing spiders.

Tourism entrepreneurs lament government's insensitivity toward the issue. They term it as ill intention of the government officials to even consider the heritage site as a residence. “It is not good to even listen at it. It is a heritage,” Sharma said.

Another tourism entrepreneur and former president of the committee Som Bahadur Thapa, who is also local of Pokhara has warned against the possible step of the local authority. He said that locals will never be ready for it.

“Do they want to create a terror here? When there will be CM's residence here, there will be soldiers with guns all around. There will be a different scene. How does it suit Fewa Lake and its beauty?” he questioned. He also stressed that there are many other areas and buildings in Pokhara which are lying vacant and could be repaired and used by the government.

Strong protest from the entrepreneurs had earlier stopped a similar move by the government. The government was about to give Himgriha and the temple to a private company to make a hotel. Mounting pressure from tourism associations and locals had later foiled it. Locals actually want it to be developed rather as an open museum.

Meanwhile, Laxman Aryal, regional administrator of the western region, said that Himgriha is suitable for new CM's residence. He even cited it as 'the only option to bring the obsolete Himgriha into use'.

“The only way to bring into use is by changing it into CM's residence. We are making efforts toward this. We searched for suitable buildings for this purpose, but this seems to be the most fitting one,” he said.

Nepal Army is currently guarding the Himgriha and the temple which falls under the authority of 'Nepal Trust'. The area is approximately 112 ropanis. Aryal said that around 10 ropanis of land could be used to build a number of cottages for the CM's residence. “We have not reached the conclusion, this is under consideration only,” he said.

Bringing this place to reuse would cost the administration far less than trying it elsewhere, he claimed. He added that the matter is under discussion and the office of the urban development will take it further.

A senior official meanwhile claimed that Himgriha indeed should be turned into CM's residence or else the government might give it to private sector anytime. “It is better to turn it into CM's residence than to let the government give it to private sector where they will change it into a hotel,” he said, requesting anonymity. “If somehow they become successful to make it a hotel, then all the garbage will be dropped in Fewa lake,” he warned.

Transport entrepreneurs are, however, not impressed by any such logic. According to them, there is no need to ruin the beauty of the lake and Himgriha under any pretext. “The heritage must be made open for all people. Or else, people will take the matter to the streets,” said Thapa.
Photo - A recent photo of Himgriha that is located just by the side of Fewa lake.

Economy is on the mend: NRB
16 hours ago

I have told Deuba that I will become the first PM of the new government: Dahal
12 minutes ago