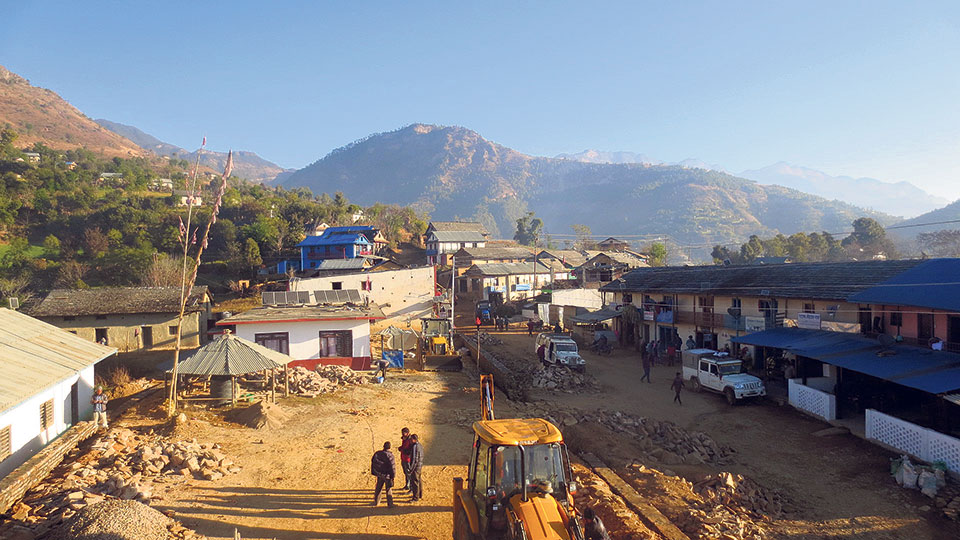 ROLPA, April 1: With the country, gradually adopting federal, local units are getting vibrant. People, including many new faces, are starting new businesses and making new transactions. New service centers have opened up in order to cater to the need of service seekers. On the other hand, district headquarters are wearing deserted look. With lesser people coming to the headquarters, Libang has met the same fate. For decades, it was arguably the only place in Ropla, which enjoyed huge attention and glory. However, now it looks like a forgotten place. Businesspersons who have not withdrawn from here are in dilemma.

“Business has plummeted by almost 35 percent so far. Earlier, people would come to Libang for every official work. But now since the local units perform almost all the functions, people have stopped coming here,” said Baikuntha Shrestha, a retailer based in Libang.

In absence of local units, people from different walks of life would come and stay in hotels of Libang for education, health and other reasons. Many of them would need to stay for days to have their work done. With the local units gradually taking over the responsibilities of the district headquarters, Libang’s businesses now cater mostly to its local residents. This has severely affected the business sector.

“People from several parts of the district would visit Libang for various purposes and would also buy goods from us. But presently they hardly make their way here. Because of this all businesses in Libang are suffering,” said Shrestha. “With increases penetration of the road network and opening of new businesses in areas where the local units are operating, there is no need for people to travel here,” he added.

Shrestha embarked in the business sector in 1980. Since then, he never had to look back. Lack of development in other areas of Rolpa was a boon for businesspersons like him. “It is good development for the villages and towns though it is loss for us,” he grinned.

With the shift in governance power towards local units, hoteliers and NGOs have also shifted to rural areas. According to locals of Libang, during this time of the year, usually NGOs would conduct various trainings and that would greatly benefit the hotel industry.

“As the NGOs have shifted their offices to rural areas where local units are operating, hoteliers have also moved along with them,” reported Shrestha.

Shiva Prasad Acharya, a pharmacist in Libang, shared that with the decline in the numbers of visitors, his business has also been affected and shared concerns that he won’t be able to run it for long. “In the recent past, a lot of people would throng here for various purposes. I would get a lot of clients and I would sometimes even hire extra staffs to sell medicines,” he said. “Nowadays hardly anyone comes around. Not just mine, everyone’s business in the district headquarters is on the verge of closure. Businesses in the rural parts our district are prospering,” he added.

Rural zones not in comfort however
Though the district headquarter is losing its charm, rural parts of the district where the local units are trying to settle and operate are yet to kick off. Local units as well as businesses that are trying to get on with the new wave, are struggling to cope with shortage of human resource and infrastructures.

“We don’t have enough manpower to handle all the responsibilities of this rural municipality.  Presently only five of us are running this office. We don’t have even treasurer in one of the wards. We are struggling with scores of problems amid huge public expectation to provide service,” lamented Chairperson of Sunchhahari Rural Municipality, Ash Bahadur Pun. “Amid all these shortages, we are doing our best to provide service, anyway,” he added.

Pun claimed that development projects were gradually picking pace across the rural municipality and expressed optimism that in a little time, the existing scenario will be different. “It is natural for us to have these shortages. We should not let it to be our weakness. We need to overcome challenges and move ahead in order to rightly respond to people’s aspirations. Soon, things would be quite better,” he said.

Most of the common problems in villages are the lack of basic facilities such as telephone, internet, bank and other services. This had made the ward officials very difficult to operate.

According to Bir Bahadur Pun, chief administration officer at the rural municipality, establishment of bank would lessen fifty percent of workload. “We have many problems to solve. However, absence of bank is most critical as you need a bank to deal with almost every government work,” he said.

Currently, there are banks in Rolpa Municipality, Sunil Smriti Rural Municipality and Runtigadhi Municipality. Several other rural municipalities, Thabang, Gangadev, Pariwartan, Madi and Lungra, among others are waiting to have one.

“Once we have basic facilities and infrastructures, we can give prompt services to service seekers. People will be happier,” said Shanta Kumar Oli, chairperson of Triveni Rural Municipality. “Without modern technology, it’s very difficult to work,” he added. 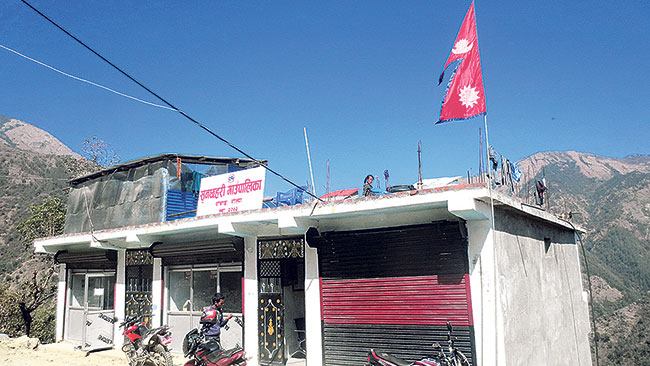 Banks to enjoy business monopoly in local units for 3 years

KATHMANDU, June 5: A commercial bank, which becomes the first financial institution to open its branch office in rural municipality, will... Read More...