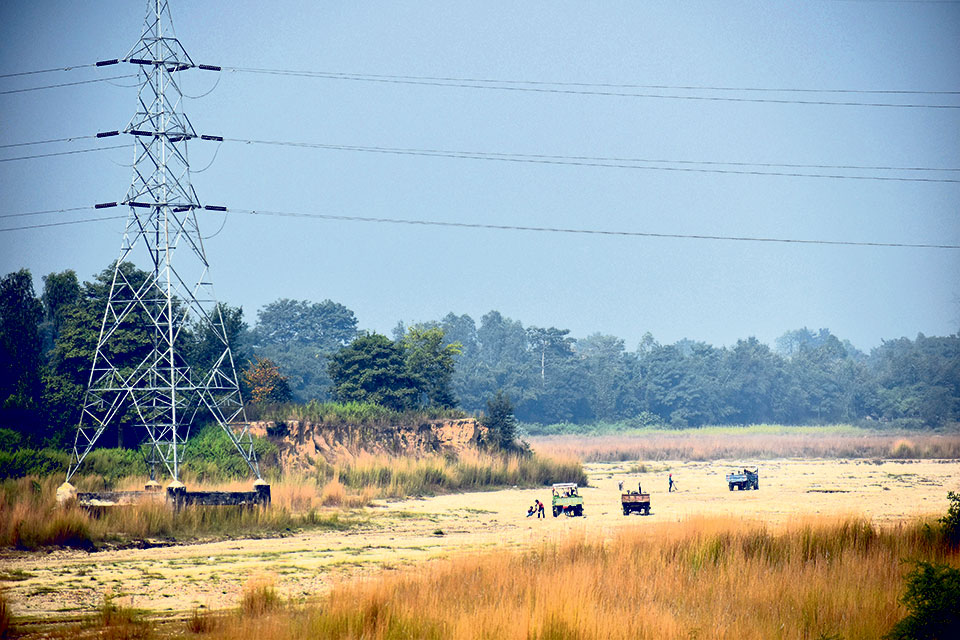 SIRAHA, Nov 19: After the election of local representatives, nature conservationists in Siraha were hopeful that the unabated extraction of natural resources in Chure range would finally come to an end. On contrary, excavation of resources became more rampant since the formation of the local government.

It has been found that Golbazar Municipality of Siraha is ahead of other local units in terms of excavating the resources. This local unit started illegally extracting construction materials from Chure since September 17. Locals immediately raised their voice against the municipality and took control of the tractor used for supplying the materials. They even called the responsible authority for taking necessary action.

Later, forest officials, local administration and the municipality reached an agreement to sell the construction materials after drawing a line between the conservation area and the area from where the materials can be collected. Chief District Officer (CDO) Rudra Prasad Pandit stated that the materials cannot be collected unless a fixed area is selected. But the local authorities have no kept his words.

Golbazar Municipality has been openly selling the materials excavated from Chure in the East-West Highway.

Sundar Lal Jimba of Golbazar-10 said that the local administration has been turning a blind eye to the destruction despite being aware of it.

Chief Administrative Officer of Golbazar, Giriraj Gyawali, informed Republica that the municipality has been extracting materials from the Ghurmi River without separating the conservation area.

"This had courted a controversy earlier as well but later the mayor of Golbazar stated that he had resolved the matter by consulting with the CDO," said Gyawali.

According to the locals, the responsible authority is doing nothing to forbid the municipality from extracting materials from the prohibited areas. People have expressed their worries over the uncontrolled excavation near bridges, riverbanks and other sensitive areas.

"It's sad to see a municipality illegally excavating resources from the Chure range despite being aware of the consequences," laments Dev Kumar Moktan, under-secretary of Chure Water Resource Conservation Committee.

The officials of the municipality are found selling the gravel, sand and other materials collected from Chure in the East-West Highway. They have been shamelessly collecting taxes from the illegal work. It is not just Golbazar but also Mirchaiya Municipality, which has been illegally extracting materials from the prohibited areas of Chure range.

KATHMANDU, May 17: Voting is taking place today at nine polling centers of five local units where the election was... Read More...

Chure has been captured by crusher mafia: Former president Yadav

KANCHANPUR, April 30: A massive fire that started three days ago in Kanchanpur district continues to take toll on the... Read More...