Local dialects on verge of extinction in lack of utility 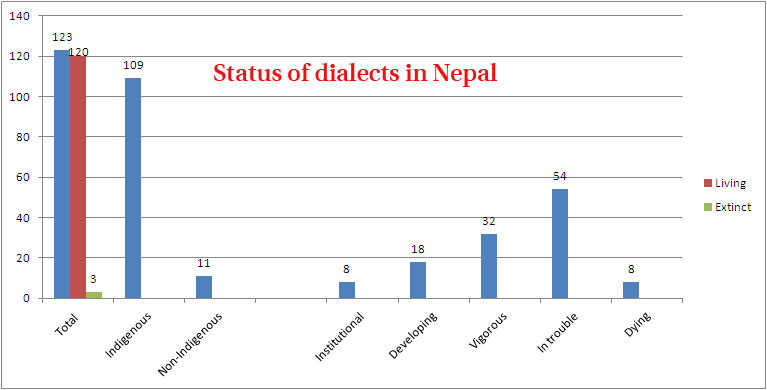 KATHMANDU, Aug 12: At a time schools and colleges are happy teaching foreign languages, fueling massive brain drain from the country, no attention is being paid to preserve local dialects that are central to the survival of various ethnic cultures.

There are about 3,000 schools and higher education institutions in the Kathmandu Valley.
Schools and colleges are allowed to include foreign languages as per the set curriculum, said the officials at the Ministry of Education (MoE).

However, the government officials are unaware about the number and status of education institutions teaching foreign languages.

“Schools and colleges can teach foreign languages as optional subject as per the rules set by the Curriculum Development Center,” said Dr Hari Prasad Lamsal, spokesperson for the MoE.

Several private schools and colleges teach foreign languages such as Chinese, French, German, Spanish, Urdu and many more throughout the country, especially in the Kathmandu Valley.

However, local languages such as Maithili, Bhojpuri, Awadhi, Newari and Rai, among others, haven't found a place in the curriculum of schools and colleges.

“Popular languages are means of communication in a globally competitive world,” he said.

“They also prove helpful for students who want to study abroad,” he added.

It is estimated that some 250,000 Nepalese aged 18-24 have left the country in the past 10 years but many of them do not return to Nepal after study. The MoE has been receiving about 30,000 applications annually seeking 'no objection' letters required for student visa.

The figure does not include students going to India. According to an estimate, altogether Rs 30 billion flows out of the country as college fees and expenses.

Koirala, the education expert, said, “People learn English because it opens windows of opportunities for them.”

Koirala further said that modern age is driven by the sense of utility. “Culture and language can be also linked to utility,” he said. “Local languages and cultures should be linked to utility to preserve and promote them,” he added.

KATHMANDU, Aug 3: At a time when universities, colleges and private education institutes are vigorously promoting foreign languages, no one... Read More...