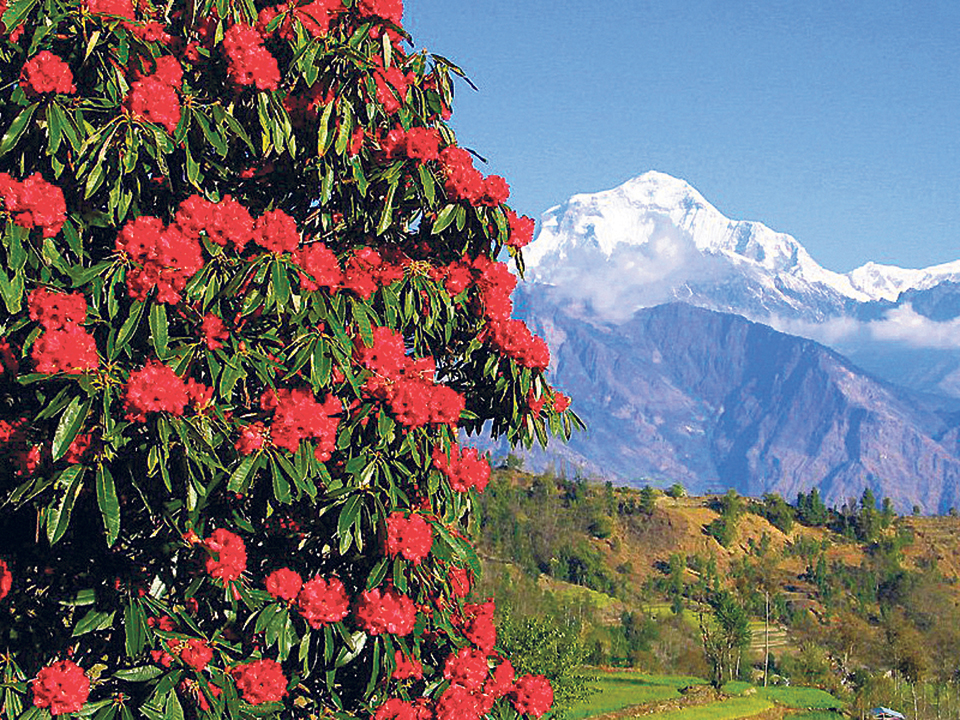 MYAGDI, Sept 30: Poon Hill is famous for its dense rhododendron forests. This forest is one of the major tourist attractions. Along with Poon Hill, there are areas in Myagdi where the national flower blooms. However, this forest is facing threats from its admirers themselves.

Visitors are found to pluck the flower recklessly and some even break branches. Growth of the tree is seriously hampered because of such reckless actions. Along with that, there are also incidences where visitors root out Laligurans saplings to take along with them.

Considering the increase in such incidences and to expedite conservation measures, local authority has launched a campaign. As part of its campaign, it has announced to provide an award of Rs 5000 to anyone who provides information on theft or reckless handling of rhododendron.

Along with that the Raghuganga Rural Municipality announced that it will fine Rs 15,000 to anyone found guilty of theft or reckless action against the plants.

“If we stay quiet and do nothing, our national flower might become extinct. The trees are being cut, flowers plucked carelessly, branches pulled and broken,” noted Bhava Bahadur Bhandari, chairperson of Raghuganga Rural Municipality. “We have announced to provide Rs 5000 to informants and charge Rs 15,000 fine to anyone involved in restricted actions,” he added.

The rural municipality expects that the reward and punishment policy will help in countering reckless actions of visitors. To further improve the campaign, it has partnered with the civil society and local organizations.

Bhandari said that along with tourists, villagers also destroy rhododendron forests in search of timbers. Since long they have been using rhododendron trees, among others, for firewood.

Speaking at a function organized at the district headquarters, Beni on Saturday, Bhandari said that conservation of the forests cannot be possible without the active participation and cooperation of the locals. Because the forest areas are scattered in different parts, forest guards alone cannot control the deforestation, he said.

“Had the forests been located in certain areas, it would be little easier to guard it. But they are scattered. So, we have sought support from the locals to push our conservation efforts,” he said, adding that the cash reward will further encourage the locals on controlling deforestation.

He informed that the municipality is mulling over plans to expand the forest area claiming that the increase in the rhododendron forest would further boost tourist arrival in the district.

“We are thinking of organizing massive plantation of rhododendron saplings. This is important for tourism as well as our environment,” he said.

Jivan Kumar Malla, spokesperson of the rural municipality, said that people who go to watch rhododendron forests usually do not come back without plucking flowers. This casual behavior of plucking flower in fact does quite harm to the forest.

“For them, it’s just one or two flower, but that affects the forests very much collectively. Many people come to visit the forests and if each of them plucks some flowers, their collective actions affect the forest massively. This has to be controlled,” Malla said.

“We are trying to discourage visitors from doing so. With the fines, we expect visitors will desist from plucking flowers and harming the trees,” he added.

He said that visitors should take pictures of the forest as much as they want to, but must not break branches or pluck flowers. “Those who pluck flowers will be on the list of offenders and they will have to pay fines for it,” he stated.

Red, pink and white rhododendron bloom in the hills in this season. Biggest forest of rhododendron in the district is in Ghorepani.

MYAGDI, June 1: Dilip Sherchan, the newly elected Chairman of Ward No. 6 of Malika Rural Municipality has said that he... Read More...