Living up to its name 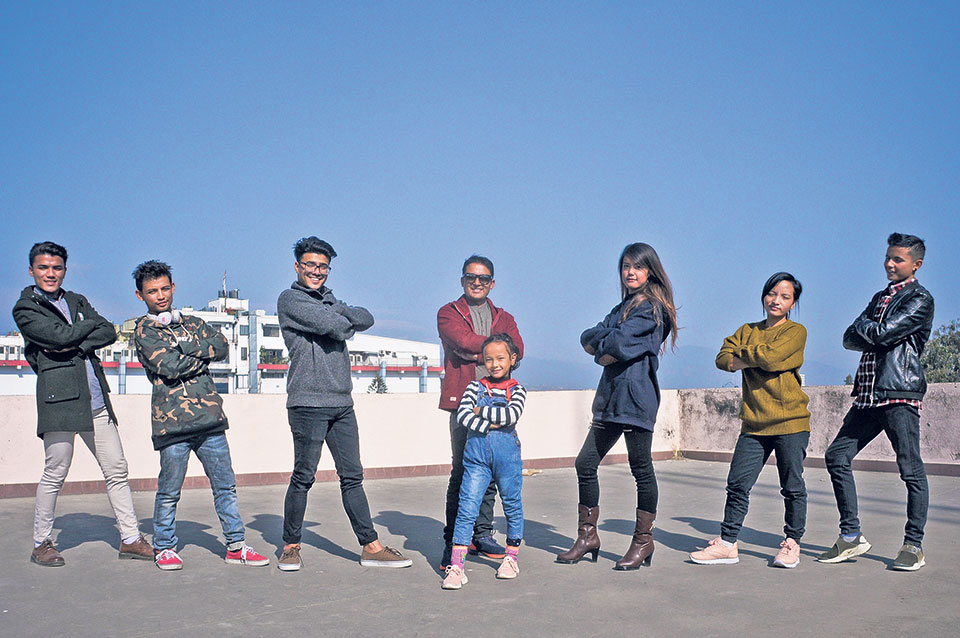 There is no escaping the funny lovelorn lyrics, witty choreography and strikingly modern dace form of the recent hit Nepali music video. With more than 2.5 million views ‘Viral bhaidiyo’ song has become the number one trending video on YouTube in Nepal. The outstanding performance of the entire ‘Viral Bhaidiyo’ team has been able to captivate many Nepalis across the country and abroad. “As soon as I heard the lyrics of the song, I wanted to make a music video for it,” says Sabin Karki, director, choreographer and actor of the song.

Little Dreamer
“I love dancing. I have been dancing since I was a kid,” says Dikha Thakuri (Nanu), the little dancer in the video. This eight-year-old dancer is currently studying in Dhading in grade two. Her outstanding dance moves and expressions have definitely been the highlight of ‘Viral bhaidiyo’.
Thakuri had to stay away from her parents in Kathmandu for about a month to prepare for the music video. “I used to miss my parents and cry a lot,” says Thakuri. “It was not difficult to make her stop crying. Turning on Snapchat filters or making her watch cartoons on my laptop would often do the trick,” adds Karki.

According to Karki, she is an extremely hardworking child and an outstanding dancer. “After hours of practice, most of us would be extremely exhausted but she would never be tired of dancing,” says Karki adding that she catches the flow of any dance very easily.

The very famous dialogue from this song by this little girl, “My brother has gone to Japan” is based on a real life incident. “My dance teacher who is almost like my brother went to Japan recently. I cried a lot at the airport,” says Thakuri. Before leaving for Japan, the dance teacher had asked Karki to mentor her. “He wanted me to groom her and make sure her talent didn’t go to waste. This song was my attempt to do so,” says Karki.

Now, the little girl has big dreams. She aspires to become one of the finest dancers in the world. “I not only want to become a dancer but an actress as well,” she says.

Winning hearts through his words

Manas Raj, singer, lyricist and music composer of the song, had been extremely fascinated with the word ‘viral.’ “These days everyone attempts to make their posts or videos viral on social media. So I wanted to write a fun song with the word viral in it,” says Raj. Writing and composing the song did not take him more than 30 minutes. “For some reason the lyrics and the music of the song came very easily to me,” he adds.

As a lyricist, Raj likes writing songs that are simple and catchy. “My songs have never been complicated,” says Raj adding that he writes songs that everyone can enjoy.

Most Nepali music videos are usually completed in two days but Raj wanted to do something different. “After writing this song, my motive was not to complete the video as soon as possible. I wanted to take time and make an outstanding song. I knew Sabin Karki would be perfect person for my song,” says Raj.

The song seems to have gained popularity among the foreigners as well. “It feels great when people from different parts of the world say they love your music,” says Raj. “It proves that music has no barriers,” he adds.

The video for the ‘Viral bhaidiyo’ song was shot in documentary style. “We did not have lights or makeup or even crew who would set up the stage for a shoot. We would go to a location, wait for the perfect lighting and start shooting,” says Karki. “My brother Sanjaya Karki, who is the cinematographer of this music video, is a creative genius and has played an integral part in making this a success,” he adds.

The video making process took more than 10 days. “Sabin would often spend hours to perfect a small clip. He wanted each scene in the song to be flawless,” says Raj.

Sabin Karki also says that he did not want a video where people would just be dancing. “These days Nepal has many outstanding dancers. I did not want to make a compilation of amazing choreography in this song. The song had to be fun, witty, and unique. Just collecting a bunch of outstanding dancers was not enough for me,” says Karki.

So instead of making a list of things to include in the song, he chose to make a list of what not to include in this song. And they were: a guys chasing a girl to the point where they would randomly start dancing, giving his lover a rose (he would give her ‘pani puri’ instead), dancing amidst the beautiful hills of Nepal, and a guy teaching a girl how to dance.

“In my songs I also try to depict the current scenario of our country. So when the guy is dreaming about his lover, he also dreams about good roads in Kathmandu valley,” says Karki.

According to Karki, they used to face numerous problems everyday while shooting the video. “I think it is the art of tackling these problems that makes your work count,” he says adding that he believes one of the main reasons for the success of the video was because he had a dedicated team that was extremely focused.

Sabrina Gurung, Xiring Theeng, Shankhar Dhungana, Subham Bhujel, and Maary Khatri have been praised for their outstanding dance in the song. “I loved dancing ever since I was a child but this song has been a blessing for me. Pursuing your dreams and being appreciated for it is the best feeling in the world,” says Theeng.

Initially, the group was not close-knit. So it took them some time to adjust and understand one another. “Initially, coming together to rehearse at the same time was difficult. Every one had his/her own priorities and preoccupations. Later we all adjusted our timings and the practice sessions soon became the most awaited time of the day,” says Gurung.

One of the dancers was unaware of the attention he was going to get after the release of the song. “After practicing for more than a month, on the last day of shooting, I promised to myself that I would never listen to the song again. I was actually fed up of listening to it day and night,” says Subham Bhujel. “But now, I get more than ten friend requests on Facebook every day. It feels really good,” he adds.

While some dancers missed classes at college for more than a month to practice for the song, others did not tell their parents that they were going for a music video shoot. “My father did not know that that I was a part of this song. I still haven’t shown him the video,” says Khatri.

Nevertheless, at the end of the day, the team now feels they have done an outstanding job and they are proud of it. “I like encouraging young and talented dancers. I have a YouTube channel with a huge number of followers. I want to use that platform effectively to motivate young artists,” says Karki. “This song has opened many doors for us. It was an experience of a life time,” concludes Khatri.

Living in the now

Every day in the evening a group of children come out to play in my colony. They scream, they laugh,... Read More...

BAJHANG, July 24: It has been more than four years since Surendra Damai,40, a former Maoist combatant, has been struggling with... Read More...