Livestock from Dhading have painful journeys to capital's slaughterhouses 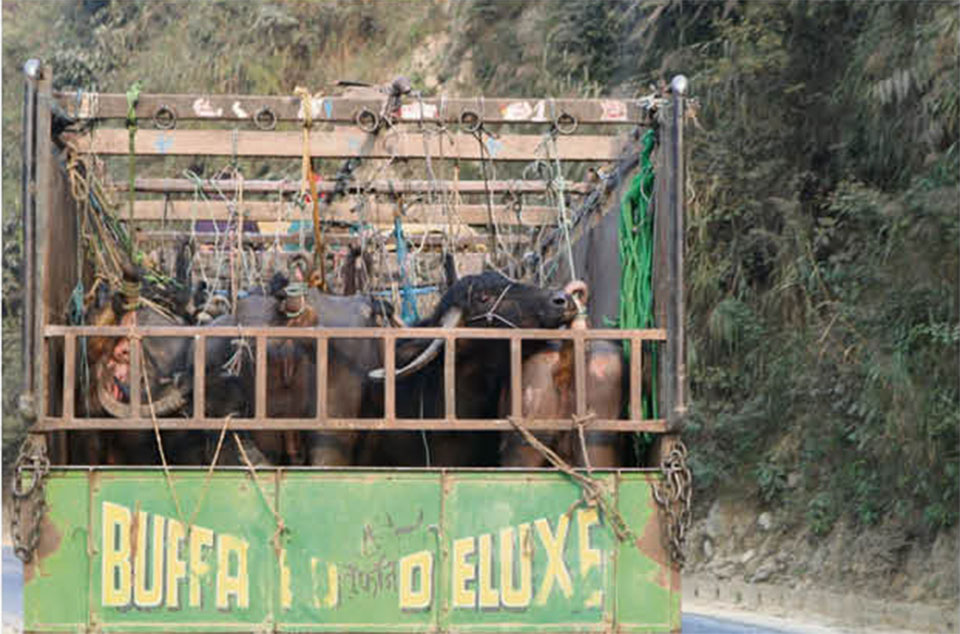 Animals being transported to Kathmandu on the Prithivi Highway in this recent photo. Photo: Sarita Shrestha

DHADING, April 19: Although the transaction of livestock is allowed, it is not legal to give any kind of torture to animals while taking them from one place to another. However, buffaloes and goats that are delivered to Kathmandu and other cities from Dhading are treated inhumanely by traders. While thousands of buffaloes are transported from here on a daily basis, squeezed into vehicles like sardines throughout their journey on the highways. According to Hemraj Ghimire of District Traffic Police Office, it is important to make the stakeholders aware of the National Livestock Policy.

“The policy does not allow carrying animals in the inhumane manner. But this has been going on for long,” said Ghimire. “The problem cannot be addressed until the stakeholders are made well aware of the law,” he added.

Ghimire stated that the police do not have the right to take action in such cases. “We carry out regular checks, but we can't take action. That right is not with us.”

In general, traders are found to be carrying twice more animals than the capacity of the vehicle. Mini and bigger trucks are normally used to transport goats and buffaloes. A big size truck can accommodate 15 to 20 buffaloes. However, it is causal for traders to squeeze 30 to 50 buffaloes into such vehicles.

“It looks very pathetic. But the traders are unaware of the standard,” noted Ghimire.

The animals are not only transported inhumanely but also are deprived of food before being loaded into trucks. The livestock purchased generally from the 'Hat Bazar' of different locations in the district are not given food before they are squeezed into trucks. They are unloaded at the destination no matter how long the journey.

According to DSP Prakash Bista, the policy requires that animals cannot be given any kind of torture. Illegal transportation and other kinds of breaching of the law attracts a fine of Rs 5,000 or three months of imprisonment or both.

“That's what is in the law. For its strict implementation, everyone should be equally sensible,” he said. He added that police does interrogate the wrong-doers but that has not been enough to stop the crime.

Buffaloes kept inside trucks are tied with iron chains. Their tails are tied. They are not allowed to sit, but packed as some non-living objects. Before being loaded into trucks, most of them receive injuries due to beating.

Dhading CDO Bhagirathi Panday, meanwhile, said that animals cannot be transported from one place to another without getting a pass from the quarantine office.

“While transporting them, animals cannot be given torture. That's illegal. There are certain standards that should be maintained,” he said. “We check things, we ask for the letter from the quarantine check post,” he added.

There are animal quarantine check posts in Chitwan and Nawalparasi.

Writ filed at SC against merciless trading of livestock

KATHMANDU, July 29: Animal rights activists have filed a writ petition at Supreme Court against the merciless transport of the... Read More...