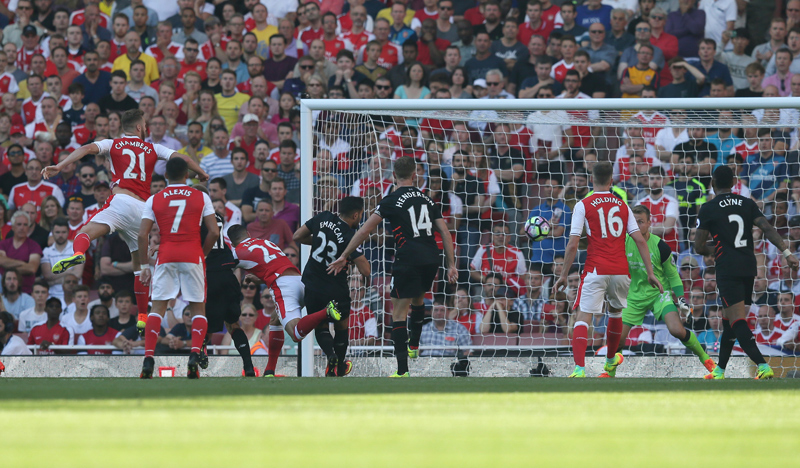 LONDON, Aug 15: Liverpool roared back from a goal down to beat Arsenal 4-3 on Sunday in a thrilling finish to the opening weekend of the new Premier League season.

Theo Walcott put Arsenal ahead in the 31st, less than two minutes after missing a penalty, only for Philippe Coutinho to equalize for Liverpool in first-half stoppage time with a spectacular free kick.

It proved to be a turning point as Liverpool tore Arsenal's makeshift defense to shreds after the interval, with superb goals by Adam Lallana, Coutinho and Sadio Mane giving the visitors a 4-1 lead by the 63rd minute.

A solo goal by substitute Alex Oxlade-Chamberlain and a glancing header by defender Calum Chambers in the 75th hauled Arsenal back into the game, but there was no equalizer in a frantic finale at Emirates Stadium.

Boos from the home crowd at the final whistle made clear the fans' feelings about the performance, along with their unhappiness at a lack of high-profile signings by manager Arsene Wenger to strengthen a team that finished second behind champion Leicester last season.

For Liverpool manager Juergen Klopp, his side's second-half performance in an astonishing match showed there is plenty of potential for silverware this season.

On a sunlit afternoon, Arsenal started brightly enough but Alexis Sanchez and Aaron Ramsey failed to make the most of a couple of half-chances.

Instead, it needed an ugly challenge by Liverpool left back Alberto Moreno on Walcott in the area to potentially change the game. The Arsenal winger picked himself up to take the resulting penalty but his spot-kick was met with an excellent diving save by goalkeeper Simon Mignolet.

The let-off lasted only 68 seconds, though, as Arsenal returned to the attack.

After a crunching interception by Francis Coquelin on Lallana, Alex Iwobi fed the ball wide to Walcott, who had been left completely unmarked by Moreno and was free to fire an angled shot past Mignolet into the far corner.

Liverpool's first clear chance came five minutes before the break, when Roberto Firmino cut the ball back from the left for Georginio Wijnaldum to drill a shot straight at Petr Cech after Chambers had given away possession with a sloppy pass.

Chambers was half of a new central defensive pairing with 20-year-old Rob Holding, as Gabriel Paulista and Per Mertesacker were injured and France's Laurent Koscielny was rested.

While Wijnaldum could have done better with his chance, Coutinho's free kick combined power and precision as it flew into the top left-hand corner, giving Cech no chance.

And there was little the Arsenal 'keeper could do as Liverpool stunned the hosts in the opening minutes of the second half.

Lallana put Liverpool ahead with a stylish finish, collecting Wijnaldum's cross on his chest before rifling a shot between Cech's legs.

Coutinho drilled home his second goal of the day from point-blank range after Liverpool finished a lesson in passing football with Nathaniel Clyne sending a powerful low ball across the face of the Arsenal goal.

It was very soon 4-1 to Klopp's transformed side after a superb run by Mane, who broke down the right flank and raced past two Arsenal defenders before firing a rasping left-foot shot into the far corner.

Oxlade-Chamberlain went one better just two minutes later, beating three Liverpool players before rifling the ball through a crowded area and past Mignolet.

And the goal bonanza continued as Chambers beat Mignolet with a glancing header from substitute Santi Cazorla's floated free kick.

But it wasn't enough for his team, or the home fans.

PM Oli is seeking a vote of confidence today in parliament. Will he survive?
13 hours ago

Nepali among those killed in Baltimore shooting
13 hours ago

Lawmakers close to Nepal-led faction of ruling UML put on hold their resignation; decide to abstain from voting in parliament today
13 hours ago

PM Oli fails to secure parliament’s confidence, what next now?
5 hours ago