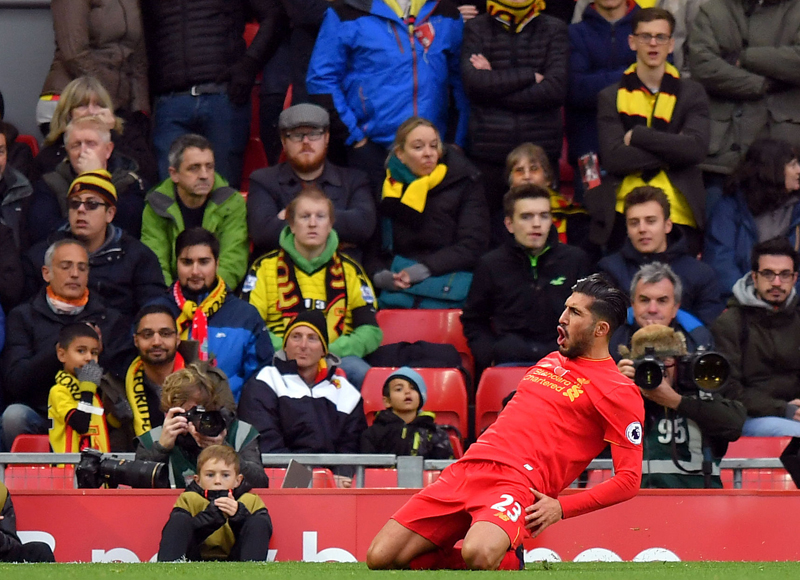 LONDON, Nov 7: There's an upside to missing out on the Champions League for Liverpool and Chelsea. They have surged into the Premier League's top two places while England's participants in Europe's elite competition failed to win on their return to domestic duties.

With no grueling midweek European games, Chelsea and Liverpool conserved their energy to produce emphatic domestic victories. A day after Chelsea routed Everton 5-0; Liverpool overwhelmed Watford 6-1 on Sunday to move a point ahead of its London title rival.

Manchester City lost top spot after being held by Middlesbrough on Saturday, dropping to third. Arsenal and Tottenham drew 1-1 in the north London derby on Sunday before champion Leicester was beaten 2-1 by West Bromwich Albion.

"It's a little physical advantage for sure," Arsenal manager Arsene Wenger said about not playing in the Champions League, which boosts the profits and prestige of participants.

What about the less illustrious Europa League where games are played on Thursday night?

Manchester United followed up its 4-1 victory at Fenerbahce by winning 3-1 at Swansea to halt a four-match winless run in the Premier League. Southampton, though, came back down to earth after beating Inter Milan by losing 2-1 to a Hull side in the bottom three.

Sadio Mane, Philippe Coutinho and Emre Can scored in the space of 16 first-half minutes to put Watford out of sight. Roberto Firmino, Mane and Georginio Wijnaldum added further goals in the second half.

Liverpool, which has now scored four or more goals in five league matches this season, is a point in front of Chelsea and two ahead of Manchester City and Arsenal.

"When I came here (in October 2015) I asked for time and patience and belief," Liverpool manager Juergen Klopp said. "And after 11 match days everyone's asking for guarantees and they are not there. The only thing we have is a pretty good football team."

Jose Mourinho was forced to watch from the stands as he served a touchline ban but he will have liked what he saw in south Wales.

There was a landmark goal for one of the brashest of players. The first of Zlatan Ibrahimovic's two goals was the 25,000th in the Premier League since the competition's inception in 1992.

Paul Pogba also unleashed a 20-yard volley for his second league goal since joining United in August from Juventus for a world-record fee of 105 million euros.

Swansea is only off the bottom due to Sunderland having an inferior goal difference and Bob Bradley has collected only one point from his first four matches in charge.

The first American manager in the Premier League, Bradley has extended the winless run — which started under the fired Francesco Guidolin — to 10 matches. That's the worst since Swansea was promoted to the Premier League in 2011.

Harry Kane made a scoring return from injury Sunday, grabbing the equalizer at Arsenal to preserve Tottenham's unbeaten start.

Kane, who has missed 10 games after damaging ligaments in his right ankle, converted a penalty six minutes into the second half to prevent Arsenal going top of the table.

In a north London derby played at a frantic pace, Tottenham gifted Arsenal the lead just before halftime when Kevin Wimmer inadvertently headed Mesut Ozil's free kick into his own goal.

Despite Spurs being on their longest unbeaten run in the league — 11 games — in more than 50 years they remain fifth.

Leicester's 20-game unbeaten home run in the league, stretching back to September 2015, is over and the team is only two points above the relegation zone. Having been defeated only three times in the unexpected title-winning season, Leicester's defense has begun with five losses in 11 games.

All the goals came in the second half. Leicester forward Islam Slimani did quickly cancel out James Morrison's opener but Matt Phillips scored the goal that moved West Brom to 11th and sent the hosts tumbling to 14th place.

Leicester's focus is on Europe, with only one point required from its last two group stage games to book a place in the Champions League round of 16.

Hull remains in the relegation zone despite halting a six-game losing streak but is only one point from safety. After Charlie Austin put Southampton in front from a first-half penalty, Robert Snodgrass and Michael Dawson scored in a two-minute goal blitz for Hull around the hour.

LONDON, Jan 22: Manchester United (MANU.N) have retained their position as the highest revenue-generating soccer club in the world, edging out... Read More...