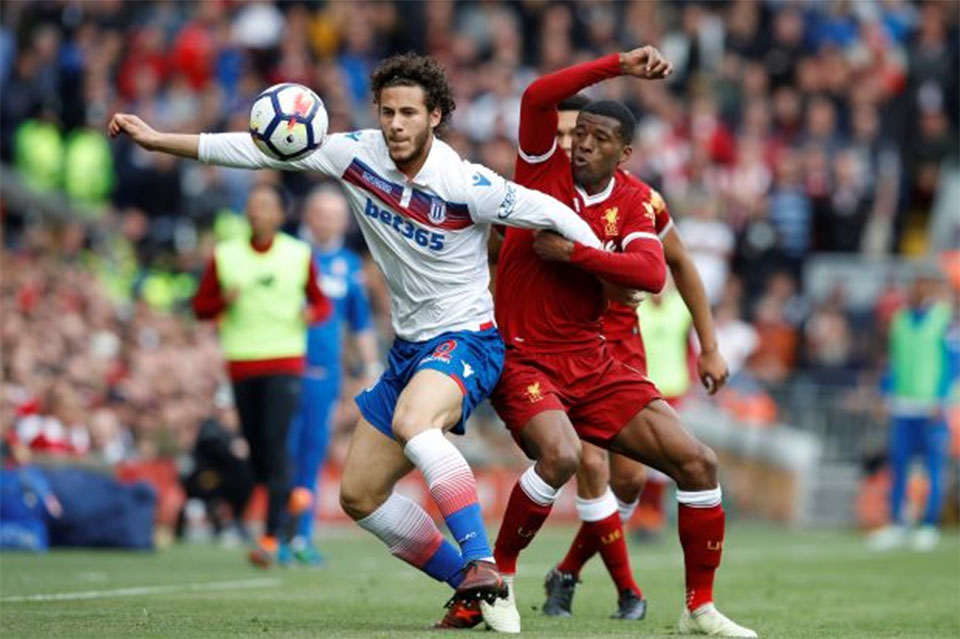 April 29: Liverpool’s hopes of virtually securing a top-four Premier League spot were frustrated by a battling Stoke City side who restricted the usually free-scoring Reds to a goalless draw at Anfield on Saturday.

But Stoke’s hard-won point may not be enough to secure the visitors’ survival after Southampton, West Bromwich Albion and Crystal Palace all won. With Swansea City due to play Chelsea later on Saturday, the fight for positions at both ends of the table will go to the final day.

Liverpool, who still have to face Chelsea at Stamford Bridge, lead the Blues by nine points with two games in hand although superior goal difference may prove decisive for Juergen Klopp’s side.

Domestic finishing position would, of course, prove academic if Liverpool win the Champions League. They certainly looked like a side with their semi-final second leg in Rome on their mind as they failed to make the most of 72 per cent possession against visitors who had never won a league game at Anfield.

Even 43-goal Mohamed Salah had an off-day, marking the first time since Boxing Day that the Egyptian had failed to score after starting at home.

Liverpool, who made five changes from their semi-final first leg in midweek, felt they deserved a late penalty after Erik Pieters handled in an incident similar to the one that led to James Milner conceding a spot-kick against AS Roma.

“We had to make changes, that is always a bit of a rhythm breaker, in the final third everything is instinct between the regulars, and we missed a bit of that,” said Klopp, who added Liverpool had not sustained any further injuries.

Elsewhere, Chelsea kept alive their hopes of finishing in the top four after an early goal from Cesc Fabregas helped them secure a 1-0 win over a Swansea team who are just one point above the bottom three and face a major battle to retain their top flight status.

Southampton gave themselves a shot at safety by beating south coast rivals Bournemouth 2-1 with two goals from Dusan Tadic. Goalkeeper Alex McCarthy proved the real hero with a late save from Ryan Fraser, whose fierce shot looked destined for the net.

Heartening as the win was, a Swansea victory later on Saturday would still end Albion’s eight-year top-flight stay.

Palace all but guaranteed their safety after thumping Leicester City 5-0, a result that will do little to halt the speculation over Claude Puel’s future as Foxes’ manager.

Wilfried Zaha scored Palace’s first and laid on their second for James McArthur while substitute Christian Benteke rounded off the rout with a penalty.

Roy Hodgson’s side are now six points clear of the drop zone although they have played one more match than four teams below them. Among them are Brighton & Hove Albion, who drew 0-0 with Burnley, and Huddersfield Town, who lost 2-0 at home to Everton.

Although Huddersfield are three points clear of 18th-placed Southampton, their run-in is difficult with trips to Manchester City and Chelsea and a home game against Arsenal, which will be Arsene Wenger’s final match in charge of the Gunners.

LONDON, March 18: Four-goal Mohamed Salah set a Liverpool record as they moved to third in the Premier League by thrashing... Read More...